Blood in, blood out 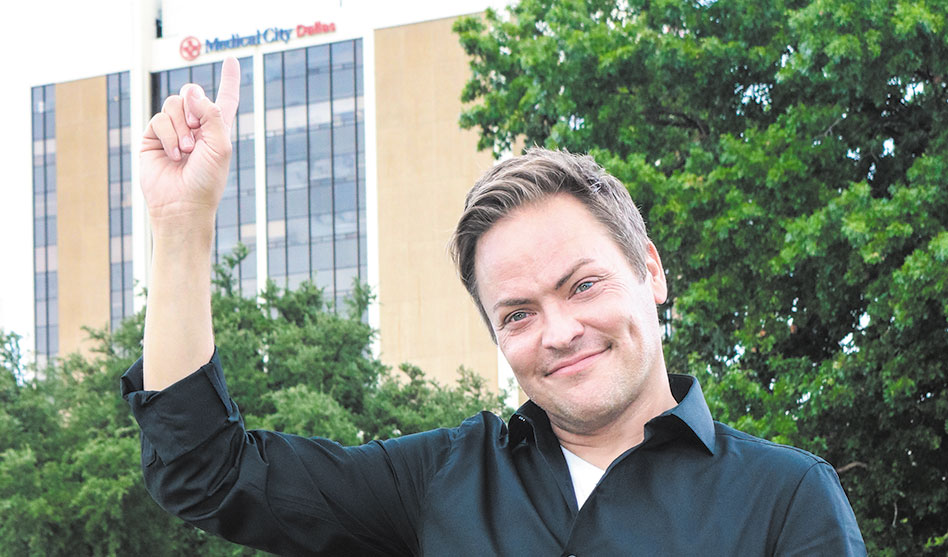 Michael Moore spent weeks at a time looking at the park across from Medical City while he dealt with a cancer diagnosis.
(Photography by Arnold Wayne Jones)

We’ve all spent most of 2020 worried — worried about our health, worried about the future. But for Michael Moore, such concerns have become part of the fabric of his adult life. (You think you’ve gone stir crazy? Try spending three weeks in a hospital gown confined to a single floor of a hospital.) And he’s weathered it fiercely with an outlook that buoys those around him.

No one has rolled with the punches as adaptively as Moore. When he was a kid, it took just one episode of Solid Gold to make him forget all of his previous dreams of being an ophthalmologist; he wanted to grow up and become a Solid Gold dancer — one of those peripatetic, energetic backup performers on the weekly syndicated music showcase.

But dreams change, and we all adjust. Moore moved to Texas from his native Dearborn, Mich., in 1981, dipping his toe in the college pool — first attending Collin County Community College’s acclaimed theater program before transferring to Sam Houston State University. After years of uncertainty about what he really wanted to do with his life, he finally landed in cosmetology school.
Moore focused on hair because, he was told, he was “too chatty” for skin care. (“You talk too much to be in skin care,” his school counselor scolded him. “Skin care is supposed to be relaxing.”) Moore knew the minute he toured the hair section of the school it would be the perfect fit for him. He started the very next day.

It proved to be the right course. These days, Moore is a hairstylist and color specialist at Elements Salon by day, and a wig and makeup artist for the DFW theater community by night. (He won a DFW Theater Critics Forum Award for his work on the 2017 Uptown Players’ production of La Cage aux Folles, for which he designed all of the make-up and all 80 (!) of the wigs.) He has even appeared onstage — Moore began doing drag in 1999, first in clubs and eventually in Uptown Players’ revival of Pageant. (“I’ve always been a queen at heart,” he smiles.) 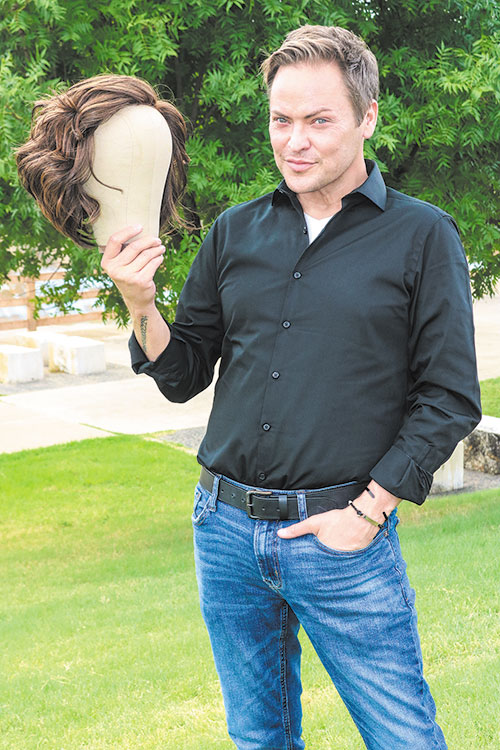 You might say life has worked out pretty well for Michael Moore. And it had… until April 2016. That’s when he rushed to the ER, thinking his appendix was about to burst. “To my surprise, it was my spleen,” he recalls. “My white blood cell count was beyond anything the ER nurses had seen. The next morning, I met with an oncologist, and after two biopsies, I was officially diagnosed with stage 4 follicular lymphoma.” In other words, an advanced stage of cancer.

I’m going to lose my hair!’” After that initial shock, “my next thought was ‘OK, what’s next? How do I beat this?’”

The answer emerged during his first rounds of chemotherapy. What Moore needed was a stem cell transplant. But in what Moore labels a disgraceful reflection of the medical system in the U.S., “I didn’t have insurance at the time, so it was taken off the table. No doctor would approve a multi-million-dollar procedure without insurance.”

Despite the setbacks, Moore maintained a defiantly sunny disposition. “Even with a shaved head and all those tubes and his ass hanging out of his gown, he could charm the stethoscope off every nurse,” quips Mikey Abrams, one of Moore’s closest friends. “Michael thrives around other people. He has a serious likeability factor that really helps him.”

Armed with that attitude, Moore — remarkably — beat that round of cancer, even without the transplant. Unfortunately, it came back in May 2019.

“I knew it was coming,” Moore says. “I was in NYC working on Jessica Cavanaugh’s Self-Injurious Behavior, and I knew it had come back. I could hardly walk two blocks, and my color was completely off. When I got home, I went to the ER and was immediately given multiple blood and platelet transfusions. I knew this time was going to be more intense than the first go-round.”

This time was significantly different though because, thanks to the Affordable Care Act, Moore now had insurance coverage, which even applied to pre-existing conditions like his. “That took a lot of stress away from me, even though I knew the treatments and procedures would be more intense. The days would be long and the anxiety more intense. Anxiety is my friend now. We have learned to coexist.”

When he learned about the transplant, Moore made it his mission to ensure that all of his friends, family and coworkers were all registered as a donor with Be the Match, operated by the National Marrow Donor Program (NMDP), which manages the largest and most diverse marrow registry in the world. (The process is as simple as filling out a form and swabbing inside your cheek to collect sample cells.) He soon got the call that everyone waiting for a donor longs for: Be the Match found a viable donor and that donor was ready to donate.

“My heart leapt,” he recalls. “My closest allies were ready for anything. For me, it all happened so fast. I couldn’t process what was about to happen.”

Interestingly, while Moore was still in chemo, he also discovered through Ancestry.com that he had a full-blood biological brother, something he did not know since he was adopted. The two have texted extensively, and although they haven’t met in person, Moore’s brother did actually offer to be his donor. But his brother’s age and the timing made the donor they had already found a better bet.

Stem cell transplants are one of the most difficult things from which to recover, Moore was told time and again. So despite all of the support he had, he was feeling the pressure. “I wasn’t sure if I had the mental capacity to handle what was my only option.” But regardless of how ready or not he might be, Moore didn’t have a choice if he wanted to live …which he very much wanted to do.

The actual day of the transplant he recounts as surreal. In fact, he finds it difficult to remember many details. Although some transplants can take eight hours with teams of surgeons, his process was really very simple: A 30-minute procedure in his hospital room with a nurse. (It takes only a small bag of cells to transplant, which is done much like a blood transfusion.)

But what Moore won’t soon forget are the days that followed. “So many complications from the chemo. So many highs and lows. When I hit my year mark, I was in a quiet reality. The day came and went without fanfare or streamers. It was me thanking my donor and my medical staff through prayer. Thanking my friends and family. I couldn’t have a party so I celebrated with a Facebook Live drag show to raise money for Be the Match. It was just what I needed.” Moore raised $1,750 via the event.

With the transplant, Moore achieved 100 percent cell takeover and is now not only alive but also quite healthy. (One positive: He lost 80 pounds.) He’s even back to work — cautiously, of course, especially with the risk of COVID-19 still looming.

That’s the great news. The bad news is, even with insurance and the support of family, friends and the LGBT community, out-of-pocket expenses seem endless. He credits theater friend Ashley Puckett Gonzales and her charity, Gideon’s Feet, for raising more than $12,000 for his expenses while he was out of work; Rooftop Productions and Pocket Sandwich Theater also organized and hosted a cabaret benefit for him just before the transplant.

But the organization truly responsible for saving his life is Be the Match. “Without them,” Moore says, “I wouldn’t be here. This organization’s only goal is to save lives. They find your match first, then take care of everything. Literally everything for the donor,” even providing resources post-transplant.

Of course, the most important resource of all is the marrow and stem cells that Be the Match finds and transports. And as it turned out for Moore, that’s solid gold.

Michael Moore will stream a live drag show and fundraiser via Facebook Live on Sept. 12 at 7 p.m.