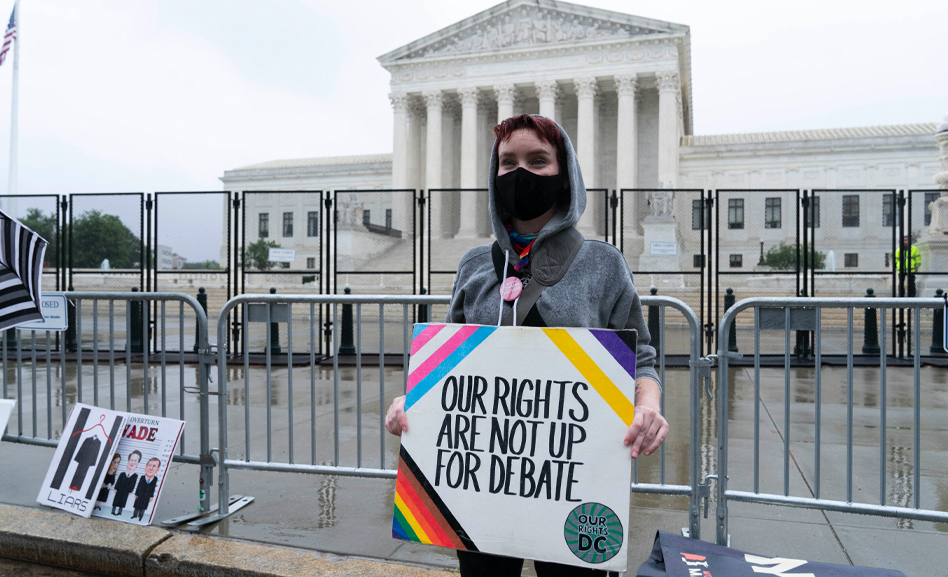 In this photo from Thursday (June 23) an abortion-rights activist protests outside of the U.S. Supreme Court on Capitol Hill. (AP Photo/Jose Luis Magana)

President Biden issued an executive order today (Friday, July 8) offering limited protection to abortion access in the wake of the U.S. Supreme Court’s June 24 ruling in Dobbs v. Jackson  that overturned Roe v. Wade. But, in signing the order, the president stressed that political change is necessary to restore all the rights torpedoed by the Dobbs decision.

“I’m asking the Justice Department that, much like they did in the Civil Rights era, to do everything in their power to protect these women seeking to invoke their rights,” Biden said.

The president’s order expands access to contraceptives, bolsters patient privacy protections, provides paid leave for federal workers who must travel out-of-state to receive abortion care and promises free legal aid to people facing prosecution for abortion-related activities in states where the procedure has been criminalized.

NPR notes that at least nine states have banned abortion so far — including Texas, Alabama, Arkansas, Mississippi, Missouri, Oklahoma, South Dakota, West Virginia and Wisconsin. A dozen more states are expected to prohibit or restrict the procedure in the coming weeks.

Biden’s executive also order directs the secretary of Health and Human Services “to issue a report in the next 30 days outlining additional actions to protect medication abortion, expand access on emergency contraception and IUDs, and increase public education around reproductive rights,” NPR reports. “The Biden administration is also calling on the Federal Trade Commission — an independent body — to consider taking steps to protect the privacy of people who are looking for information about abortion services.”