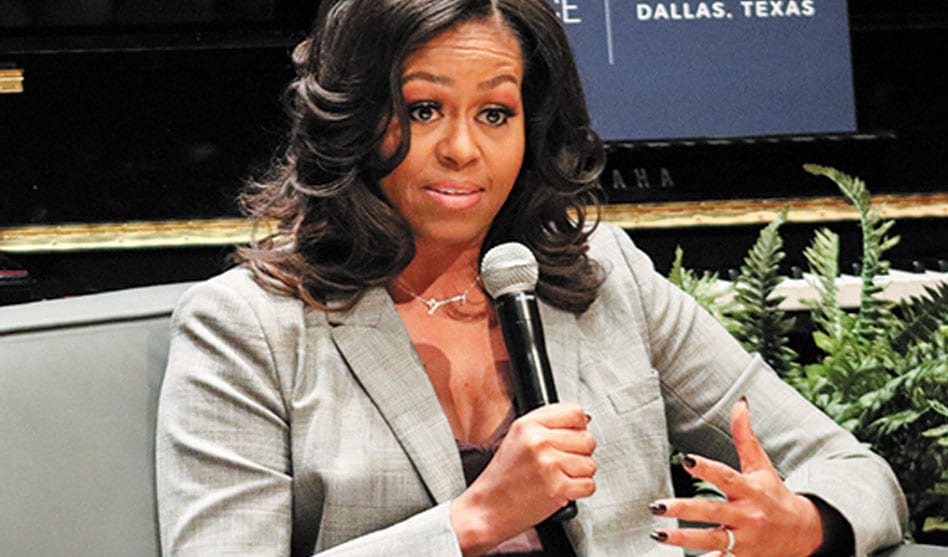 Former first lady Michelle Obama spoke at the American Airlines Center this week about her new book Becoming, telling some of the stories about how she became who she is. But that undersells what this multi-million dollar evening was really like.

On Monday afternoon, the former First Lady was just being Michelle Obama, inspiring 150 teenage girls attending a leadership conference at the Winspear Opera House and leaving them with a day they’ll remember the rest of their lives.

To prepare for the Young Women’s Leadership Conference, the 9th-to-12th graders read Becoming. At an afternoon breakout session in the Winspear’s Hamon Hall, Matrice Ellis-Kirk, chair of the AT&T Performing Art Center’s board of directors, led 30 of the teens in a discussion of what most inspired them and what surprised them in the book. 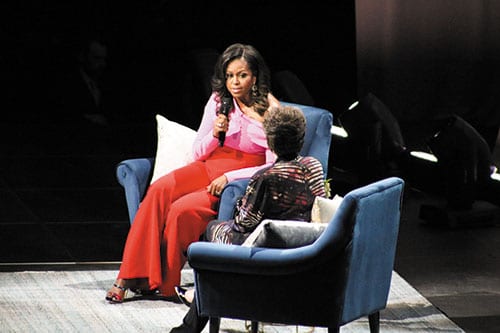 One teen explained that because Obama always says proudly she is from Chicago’s south side, she is able to claim her heritage, too. “I live in West Dallas,” the teenager said. “I say it proudly now, because she says it proudly.”

That’s when Obama came out from behind the curtain, surprising the young women who shrieked with delight. One jumped up to hug her, and Obama made a point of hugging each and every one of the girls in the group before sitting down on a sofa next to one of them.

Obama talked to them about applying to college. She told them that when she decided she wanted to go to Princeton, a high school counselor told her she wasn’t Princeton material. But that only made her more determined to get in. She encouraged the girls to find the school that felt like the right fit for them and not let anyone tell them they couldn’t achieve what they set their minds to.

Obama also talked about her friendship with former President George W. Bush and how a difference in policies or opinions doesn’t have to divide people: “People can look beyond politics,” she explained.

And since her conversation always remained high, she didn’t mention the current White House residents.

Obama told the group to embrace who they are: “They want you to think small,” she said. “They think if you win, they lose, that you’re going to take their place. So you have to work hard and be prepared.”

After the session, one of the girls who was sitting near the curtain said she heard heals clicking backstage, which started her thinking, “Wouldn’t it be crazy if Mrs. Obama was here?”

Another said she was tingling when Obama came out from behind that curtain.

But most important was the message the former First Lady had for the girls: “She told me to have confidence in myself,” one of them said, speaking like someone who had just been hugged by a rock star but also with complete, new-found self-assurance.

After the small break out, Obama addressed the entire leadership conference, telling them, “I don’t know you personally, but I know who you are. You are me.”

She said she had tickets for each of them to attend her event that evening at the American Airlines Center, and she might as well have been Oprah giving each member of the studio audience a new car. That evening, she gave the group a shout-out from the stage, and the teens gave her a shout back.

While there may have been a book, this book promotion event didn’t resemble any other event to promote a book. From ticket prices to screaming fans to merchandise sales, this was a rock concert without the music. 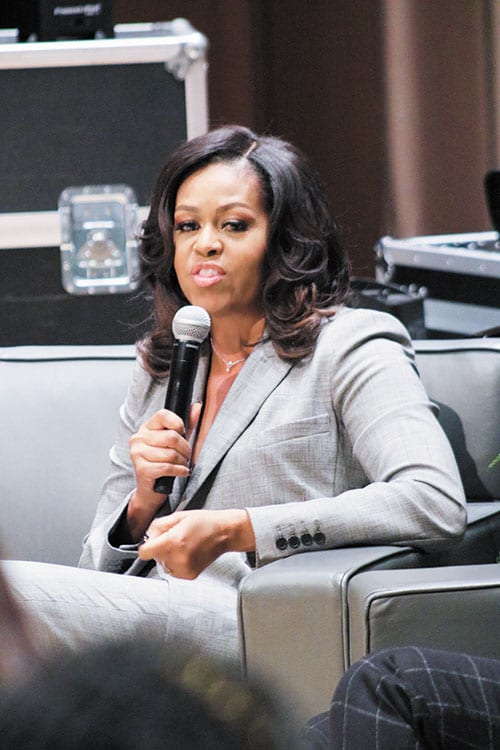 The event sold out within minutes of Live Nation putting tickets on sale. Special event DART trains ran to Victory Station — for a Mavs game?

Sure. For an author? A first. Fans stood in line to take selfies with Michelle Obama cutouts positioned around the arena hallways. Kiosks featured t-shirts with slogans like “When they go low, we go high.” People bought stadium nachos. And posters. And banners.

When the event began, former White House advisor Valerie Jarrett led a two-hour conversation with Obama about topics like infertility, marriage counseling, raising children and what it was like living in the White House.

On infertility, Obama said, “I know someone out there is struggling right now,” and — in typical Obama style — offered comfort and understanding while providing hope through medical advances.

On marriage, she said, “No one ever tells young couples marriage is hard,” adding that counseling helped her marriage.

“My husband is a bad dude,” she said. “There are times I wanted to throw him out a window.”

But she said her goal was to remain married for 50 years. “If you have 10 bad years,” she said, “that’s pretty good.”

Around the time her husband was elected to the U.S. Senate, Michelle Obama was applying for jobs in Chicago. She had an interview and nowhere to leave daughter Sasha, so she brought her along. She said she really didn’t want the job, so she asked for everything — high salary, a lot of time off and more — and got the job.

Her future employer valued her, she said, because she demanded it.

Obama rounded out the evening with stories about life in the White House. One of her biggest challenges was going from being the spouse who earned the higher income to being a political wife. And she got the most criticism, mostly from women, she said, when she spent the first few months helping her children adjust to new schools and life in the White House.

She called the day marriage equality was declared one of the happiest and saddest days she spent in the White House. Earlier that day, she and her husband attended a service for the victims of the Mother Emmanuel Church massacre in Charleston, S.C. That night, the White House was bathed in rainbow lights to celebrate the Obergefell marriage ruling.

Crowds surrounded the White House to see the lighting, but through the building’s bullet-proof glass, Obama said she couldn’t hear the celebration. She asked her husband to go outside with her to join the celebration, but he had briefing papers to read. So she asked Sasha, but Sasha wasn’t interested. Only Malia jumped at the chance to evade Secret Service and venture outside at night, something they’d never done before.

Secret Service agents posted throughout the house were talking into their wrist radios. “Family on the move,” they warned each other, she recalled, and when she and Malia got to the door to the front portico and tried to open it, they realized the door was locked. They couldn’t get out that way.

So she enlisted the aid of a Secret Service woman to sneak them out a side entrance so they could see the celebration going on around them.

Obama described the bubble the First Family lives in by explaining how traffic stops when a presidential motorcade passes — something Oak Lawn residents are familiar with anytime Air Force One lands at Love Field. And she said, “I’ve been to India twice, and I’ve never see any people there.”

She said that level of security gave her children an odd perspective of the presidency: The Obamas had prepared their children for the inauguration and how many people would be attending. But the streets were cleared for the presidential limousine to whisk the family to the inaugural party. So when Malia saw no one around, she said, “No one’s coming to your party, Dad.”

The biggest cheer of the evening was when Jarrett asked Obama if she was thinking of running for office. To the disappointment of the tens of thousands of fans in the arena, Obama gave an absolute no.

What she will continue to do is inspire young people. Her stop at the Winspear wasn’t an isolated appearance. She’s incorporated a similar surprise appearance to each stop on her rock-star book tour, a tour that’s been so successful, she adding dates.