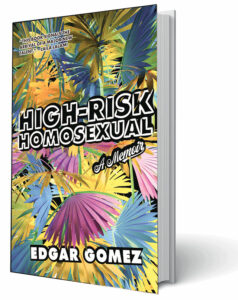 Gomez’ memoir rambles, but affably so

Here. Try this. It fits you, but the color isn’t flattering. It’s too long, too short, too tight, too loose. That’s not your style, so try something else until you find the thing that looks like you. The perfect thing is out there.
As in the new book High-Risk Homosexual by Edgar Gomez, when something’s right, it’s right. He was 13 when he figured out that he was a problem to be solved.

Edgar Gomez’ mother had left him in her native Nicaragua with his tíos, just for a while, because she had to return to Florida to work. He wasn’t there without her for long, but it took years for him to understand that his time with his uncles was meant to make him more masculine.

In retrospect, he says, nobody wanted him to be a man more than he did. He wanted to be liked by other kids, and so he told lies in school to make himself stand out. He wanted his mother to see his love of pretty things and say that it was okay. He wanted his brother to acknowledge that Gomez was gay and still tell him that he loved him.

Instead, after his brother left for college, Gomez got his first boyfriend, a boy he came out to but who couldn’t come out to himself. He was called names in school. He came out to his mother who freaked out about it. He befriended a drag queen, but “Princess” used him.

Things he wanted: A real boyfriend. Love. A ban on the stereotype of a macho Latinx man.

Things he still had, while in college: His mother and older brother. A tormentor-turned-mentor. A part-time job. His weirdness. His virginity.

Things he wanted to lose while in college: His room at his mother’s house. His virginity, but that wouldn’t happen until later during a painful one-afternoon-stand with a hot man who said he had a girlfriend.
That hurt, both physically and emotionally. But like so many things at so many times, Gomez tried not to think about it.

If he never considered what he didn’t have, he says, “I wouldn’t miss it.”

In a way, you could say that High-Risk Homosexual is a book in search of a point. It’s really quite random and told (mostly) linearly but not quite. It has its high peaks but also low valleys. And you won’t care about any of this because you’ll be enjoying every bit of it.

Yeah, this memoir is good: Author Edgar Gomez’s literary wandering makes it feel much like an honest conversation with readers. There are wince-worthy moments that allow empathy here and experiences that are unique but oddly ubiquitous that leave space for a sense of sympatico. There are passages that are so wistfully uncomfortable that you might squirm or start “snort-laughing” or want to stop a moment and just think.
And there’s room for that, too, so take your time. High-Risk Homosexual is an affable book with just enough seriousness to make it worth a try.