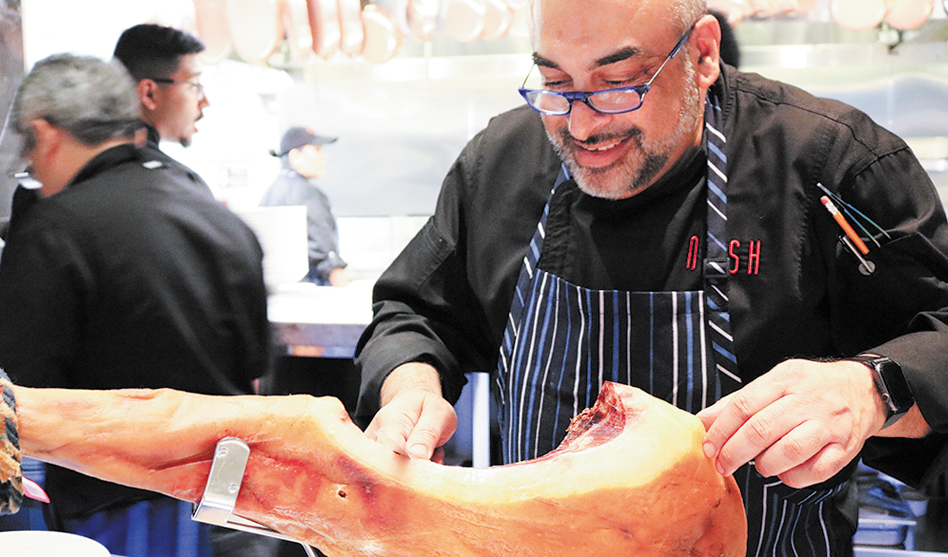 Chef Avner Samuel joyfully slices a bit of Iberico ham. The leg is a centerpiece of his kitchen. (Photos by Arnold Wayne Jones)

Chef Samuel revives his Nosh concept in Preston Hollow,
and this next-level bistro raises the culinary stakes in Dallas

Let’s get something out of the way from the outset: Nosh Bistro — which opened last month in Preston Hollow in the space previously occupied by the now-shuttered Dish — is turning out some of the best food around right now. Not best for a new restaurant. Not even in Dallas. But rather, the best food around. It’s a stunner. But there are explanations for just why that’s so.

It helps to know a bit of local culinary history. In the summer of 2004, a restaurant named Aurora opened on Oak Lawn and immediately electrified the Dallas food scene with its sophistication and French-tinged recipes, as well as its hefty menu prices. 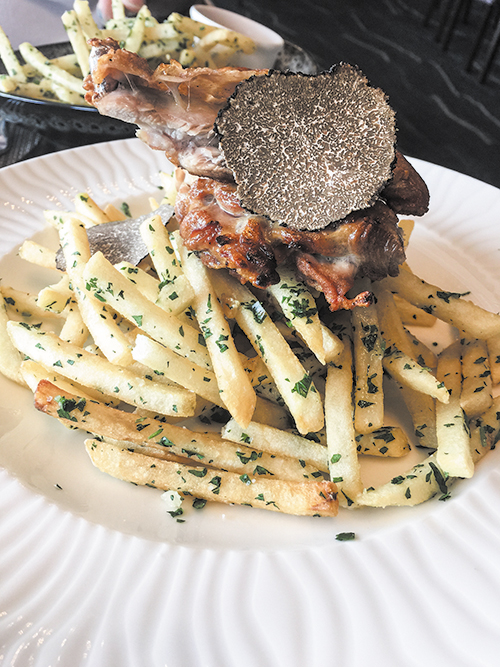 After about six years, Aurora gave way to Nosh a more down-scale version with a lighter vibe, lower prices and more accessible cuisine. Nosh continued for another four years or so until it closed for good.

So the sudden reappearance this summer — teased for months through cryptic social media posts — that the same chef was opening a concept called Nosh Bistro seemed like it would be a further evolution of the original cuisine: American dishes with Euro sensibilities, attainably priced and conceived. It would be open for lunch and dinner from the start. The word “bistro” alone conveys a casualness that the old Aurora intentionally eschewed.

The first time we entered, that still seemed possible. There’s a chalkboard near the entry with daily specials. The decor suggests Mid-Century Modern filtered through the colorful lens of the 1960s (a faux Peter Max painting dominates the main room), with tons of natural light, mossy, muted, autumnal pastels and arching walls that promise more just beyond each curve.

Then the first dish arrived. And the second. And third. After three visits, we knew this wasn’t some easy neighborhood drop-in …. Or rather, to the extent it is, the food is so elevated as to shake up our understanding of a bistro.

That shouldn’t have come as a surprise. The chef-owner, Avner Samuel, has a legit pedigree. He came up in the Dallas food culture alongside Stephan Pyles and Dean Fearing, eventually opening Avner’s, then Aurora. The latter was something of a game changer on the culinary horizon. It has a reputation for being expensive (it wasn’t cheap, but the quality was undeniable). 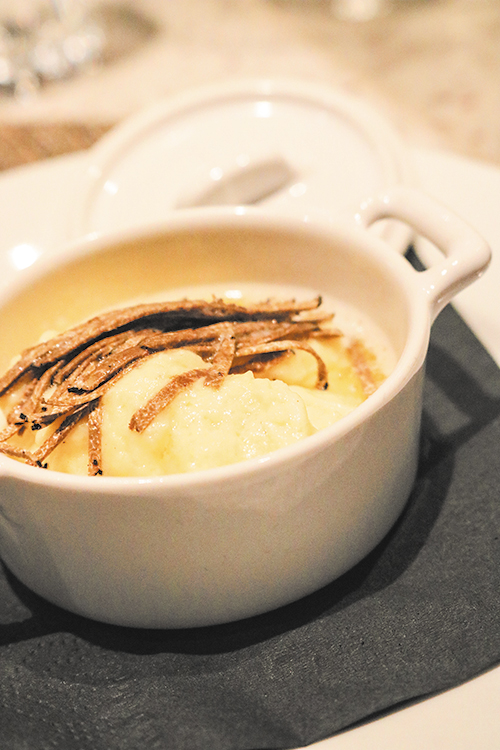 Some might call it stuffy, but it was more hushed and stately — as refined as a velvet jewel box. It may have been the last of the true fine-dining establishments to open before the era of the superstar chef as tatted and devilish took hold, where cheffy meals were hidden behind a hipster facade and less courtly surroundings (even while prices crept up). Aurora oozed opulence, on the plate and in the dining room.

Samuel has softened the aura of Nosh Bistro, in design if not execution of the food. And while there is something of the French polish to the menu, what really stands out is the chef’s own personality, cultivated through a prism of varying influences.

There are distinctly “New American” ideas at work here: a dessert of donut holes sprinkled with, of all things, Pop Rocks; grilled chicken; mac and cheese. Then come the twists — some French, but many more that are Mediterranean, Middle Eastern and Indian. Still on the menu is a holdover from the old menu: Egyptian falafel with a parsley-green interior. The chicken and mac and cheese are garnished with large slivers of black truffle. And there’s more.

Samuel explores the flavors from “the Old City” of his childhood (Jerusalem) for inspiration, then devises ways to ennoble and intensify them.

Take the chicken from the lunch menu ($26): A Meadow Creek Farm cutlet, deboned, truffle slipped under the skin, then pressed skin-side down on a skillet until crispy, finished in the oven and decorated with summer truffle, perched atop pomme frites dusted in herbs. The portion is perfect, the flavors bright and fresh. There’s an ahi entree ($26), crusted with za’atar and served with an avocado puree, aubergine and radishes. A perfect warm-weather dish.

But lots of places do ahi and chicken. So why is Nosh Bistro remarkable?

Well, there’s the midnight hummus ($12), so-called because of its inky color. But the flavor, while familiar, is new in some way, like a cross between hummus and baba ghanouch. Which is sort of what it is: Roasted eggplant skins, pulverized into a powder and folded in. My dining companion insisted it’s the best hummus he’d ever had; I couldn’t quarrel. 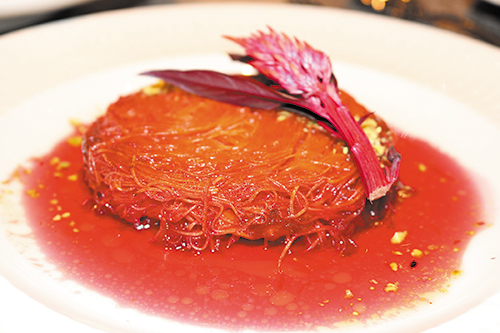 The knafeh of akawi cheese, hibiscus syrup any phyllo is one of the greatest desserts of all time. (Photo by Arnold Wayne Jones)

Samuel’s dinner menu, especially if you splurge for a chef’s tasting served omakase style, proves to be a shining demonstration of skill. (The selections, which change daily, are what Samuel finds most popular or best sourced for the moment.)

Our meal began with a flamboyant touch: A yellow tomato gelee upon which sits a square of gold leaf and a mound of osetra caviar (served, with an additional bit of showmanship, on a platform that changes color and illuminates the gelatine). You expect it will, perhaps, be slightly sweet, but no: it’s savory though light, a late-summer amuse.

Small bites abound: The shocking pink of a filet of hamachi crudo splashed with soy, pickles and chilis was succulent and sprightly. A roasted beet accented by a slice of live scallop, a pool of cucumber dashi and again, osetra caviar. (Like a designer’s runway collection, Samuel repeats themes and flavors in unexpected combinations.)

Samuel serves up several tandoori bites, including shrimp and a grilled quail leg with a side of amba-labneh dip that left me shattered. The Nigerian prawns were massive and dramatic, though shrimp that big can easily become too chewy.

The simplicity of some items belies their nimble execution. I was wowed by a loosely-scrambled farm egg, presented in an elegant ramekin and finished simply with butter and strands of truffle (again!). A centerpiece of the kitchen is a leg of Iberico ham with its distinctively nutty-figgy flavor, but served here in a custom porcelain volcano heated with a tea candle that sweats out some of the fat before you pop it in your mouth, savoring its sensual texture and richness. Over and over we were gobsmacked by the purity of flavors singing arias on our tongues.

Nowhere is Samuel’s commitment to exposing Dallas diners to a lineup nobody has dared dream in evidence more than the dessert menu (given life by pastry sous chef Diana Zamora). There are no chocolate lava cakes here, no bread puddings or carrot cakes or creme brulees. And we didn’t pass up on any of them. (All desserts are $14.)

Then again, it’s not stuffy, either. When was the last time you saw funnel cake on a restaurant menu?! This version is made of thin disks of latticed fried dough, sandwiching slices of Persian peaches, grilled on a plancha and topped with a cream and edible flowers. Donut holes, as mentioned already, are deep fried dough, yes, but finished with honeyed cherries and sumac, a purplish flower with a lemony character on the palate.

There’s the “Knickerbocker glory” (a carnival of sorbets), a halveh with cardamom ice cream and pistachio brittle and, for my money, a showstopper non-pareil: The knafeh, a rustic levantine cheese called akawi wrapped in shards of phyllo, doused in hibiscus syrup and sprinkled with ground pistachios. The knafeh — a magnificent spin on the cheese course — is probably the best postre I’ve ever eaten… and I had it twice.

Barely a month in, Samuel is already planning to tweak the menu, cut some of the prices at lunch, and figure out new ways to excite his patrons. At 63, Avner Samuel no longer has anything to prove except to himself. We are merely the lucky beneficiaries of his education.