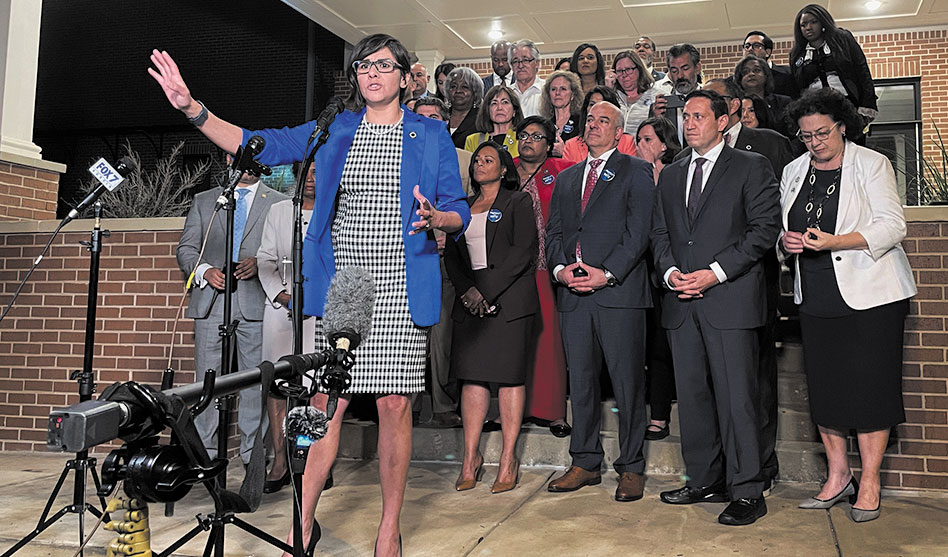 Texas state Rep. Jessica Gonzales speaks during a news conference in Austin early Monday, May 31, after House Democrats pulled off a dramatic, last-ditch walkout and blocked one of the most restrictive voting bills in the U.S. from passing before a midnight deadline. (Acacia Coronado/Associated Press)

What’s the difference between the dystopian Purge movie and television franchise — where a totalitarian government legalizes crime, including murder, one day a year with the goal of decimating the poor — and the Texas Legislature?

Texas Legislators get 140 days every other year where the people in Purge only get one day a year to do those things.

Also unlike in Purge, where civilians hide their faces with masks as they commit their crimes, legislators don’t mind showing their faces while they wreak carnage.

Thankfully, on May 31, Texas’ constitutionally-mandated purge for 2021 has finally come to an end.

To be clear, the 87th Texas Legislature was chaotic — in some ways, unintentionally so. Two events worsened the situation:

Only a few days before the Republican-dominated chambers gaveled in, President Donald Trump and his supporters led an insurrection on the U.S. Capitol with goal of stopping the verification of the Electoral College vote making Joe Biden the president. Texas Attorney General Ken Paxton was among those who spoke to the crowd that day in Washington, D.C., and state Rep. Kyle Biedermann, a Hill Country Republican who has advocated for Texas secession, was also there. 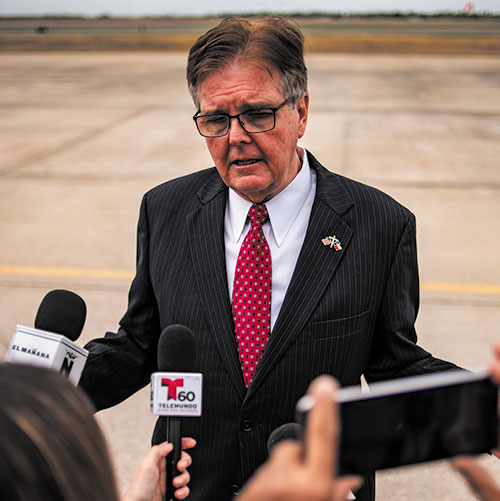 Then, only a month into the session, a winter freeze shut down the state’s power grid, leaving the grid within mere minutes of collapsing. That caused Gov. Greg Abbott to add reform of the state’s ironically named independent grid operator named the Electric Reliability Council of Texas and the Public Utility Commission, which oversees the council. Those reforms were added to the governor’s emergency items, which also included bail response reform and expanding broadband access to underserved areas.

Two items appealed to the Republican base: vaguely described “election integrity reforms,” based on Trump’s Big Lie that the election was stolen, and bills focused on punishing entities that reduce public safety budgets — a nod to “defunding the police.” Emergency items can only be set by the governor and are considered must-pass. If they don’t, the governor can call a special session.

While Abbott only named four priorities, Lt. Gov. Dan Patrick rolled out 30. Most of those passed. They included bills delicious to the Republicans’ right flank, including banning “critical race theory” in schools, scrapping licensing requirements for carrying guns, limiting lawsuits against 18-wheeler drivers who hurt or kill someone as well as banning abortion after six weeks and allowing anyone to sue the woman, doctor or any accessory to the abortion — all of which passed. Another bill would require any professional sports team with government contracts to play “The Star-Spangled Banner.”

As usual, among other priorities for Patrick and the GOP’s rightest wing were anti-LGBTQ measures largely targeting transgender youth. A record number of bills targeting LGBTQ people were filed this session in Texas and around the country. But Texas was lucky: Bills barring healthcare access for transgender youth and requiring they play sports based on the sex on their birth certificate and not their actual gender identity did not pass — although there were some close calls.

While various House versions of these bills died before getting a full vote on the floor, one Senate version made it to the House floor, thanks to a Democrat. That bill, Senate Bill 29, would have codified existing University

Interscholastic League policy requiring that students play on the teams based on their biological sex and not their gender identity. While UIL rules already prohibit most transgender students from participating in athletics that align with their gender identity, it does allow students to use amended birth certificates. SB 29 would have taken away that option.

The measure had died in the House Public Education Committee, but committee Chair Harold Dutton, a Houston Democrat, brought the bill back up for a vote in retaliation after his bill allowing Texas Education Commissioner Mike Morath to remove school board members was killed on a technicality by Rep. Alma Allen, also a Houston Democrat. Democrats generally opposed the bill on school board members, but Dutton has advocated for more state control over the Houston Independent School District, citing the district’s poor performance.

SB 29 passed that second committee vote 8-5, with all Republicans and Dutton voting for it and the remaining Democrats against it.

“I don’t know how big this problem [trans youth in sports] is, and I wish I did because I’d be in a better position,” Dutton said before the roll call vote, adding, “I can tell you this, the bill that was killed last night affected far more children than this ever will.”

SB 29 then sailed through the Calendars Committee, which decides when legislation will be voted on the floor, and went up for debate. But thanks to a handful of Democrats, including the LGBTQ Caucus, it died when Democrats used a legislative tactic called “chubbing,” which essentially allows the minority party to slow down legislation. Tactics include extensive questioning of the authors of the bill and any amendment, filing superfluous and often non-germane amendments and calling points of order.

That process lasted throughout the day. That night as the clock counted down, Democrats saw a path to victory when the bill was delayed from consideration until 11:30 p.m., all but ensuring it was truly dead.

In the final minutes before the midnight deadline, Democrats gathered at the front and back microphones, waving transgender flags. Rep. Gina Hinojosa of Austin was discussing an amendment to a bill with colleague Erin Zwiener of Driftwood about data collection for public contractors.

“Is this the time to risk their wages on an experimental piece of policy?” Zwiener pointedly asked.

The clock struck midnight, and SB 29 was dead.

“Many of the parents who showed up to the Capitol time and time again this session to defend their children were watching legislators from the gallery. They didn’t want to be alone as they waited the agonizing hours it took to get to midnight,” he said. “The relief in their eyes as the clock ran out was a reminder of how damaging this bill would have been on their little ones.

“The defeat of SB 29 would not have been possible without committed parents and community members, ally legislators and partner organizations who helped protect the dignity and inherent worthiness of trans kids. It was a true team effort,” Martinez added.

While numerous bills benefitting LGBTQ people were filed this session, none of them passed.

Democrats break quorum
As is often the case, drama ensued at the end of the session, leading two of Patrick’s priority bills to fall short.

The election and bail reform bills died after Democrats broke a quorum in opposition to Senate Bill 7, the elections bill. They opposed in particular an additional 20 pages of language added during negotiations that Democrats said they were left out of. By breaking the quorum on the final deadline for passage of finalized bills, they killed it –– for now.
Abbott is expected to call a special session in the fall to address redistricting and may add the elections bill to the call.

Dallas Democrat Jessica González, who is vice chair of the Elections Committee which heard the bill, was among the proponents and leaders of the strategic walk out. Throughout the debate, Democrats slowly trickled off the floor throughout the proceedings. By 10:30 p.m., only five remained; a few members stay behind to serve as reinforcements and pepper with questions as needed.

It was only the fourth time in Texas history a quorum was broken. And it may not the be last this year.