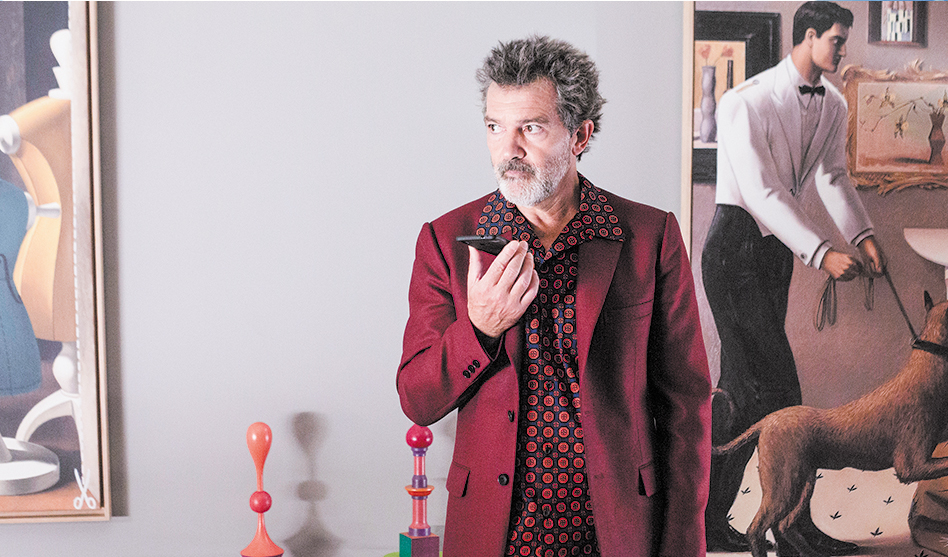 Banderas plays a filmmaker examining his life choices in ‘Pain & Glory,’ and a lawyer (below, Gary Oldman) with no such misgivings in ‘The Laundromat.’

In a pair of new films, the heartthrob matures into a thoughtful character actor

Write what you know,” the saying goes. And that has led to countless films about filmmakers … not always to the benefit. Introspective dramas about the struggles of creativity can be a cinematic ouroboros — the serpent eating its own tale. There are successful iterations, of course, notably Fellini’s 8½ and some of Woody Allen’s mid-career work.

Pedro Almodovar’s Pain & Glory is the latest entry in this sub-genre, and while slow to reveal itself, eventually exposes the intellect and emotional connectedness that distinguishes his best films.

Antonio Banderas plays Salvador (Almodovar’s alter ego), a gay movie director who hasn’t made a film in years owing to severe pain caused by a spinal fusion and other health complications. When one of his early films, Sabor, is restored and set for re-release, Salvador looks back on his life, including a break with Alberto (Asier Etxeandia), his longtime friend who starred in Sabor but whose heroin addiction ruined their relationship. You suspect Pain & Glory will play out with soul-searching, ending either at the premiere of the restored film or taking that as a catalyst to further explore their newfound friendship. But neither of those things happen exactly. Alberto all but disappears halfway through the film, and Pain & Glory goes down numerous rabbit holes, apparently losing its narrative thread.

One of Almodovar’s blindspots as a filmmaker seems to be his solitariness: He’s the lone writer-director on his intimate and personal movies, and you often sense he doesn’t have a consigilere to wave him off dead-ends or bad choices. You can’t see the unifying element until the very end — that Pain & Glory is a journey of internal reconciliation of the choices we make and the effect on our relationships. It’s less novel that a series of short stories — vignettes about Salvador’s feelings about Alberto, his own mother, his lost lover, his first crush and his own body. And more than even Almodovar, it’s Banderas who holds it all together.

It’s hard not to see Alberto as a stand-in for Banderas himself, who began his career with Almodovar before a split that lasted 20 years. Only Banderas here is the director, embodying the other side of the argument while apologizing for his own conduct. The backstory adds an emotional depth to both actor and character, that only grows during the subsequent sequences.

Banderas has always been a risk-taking actor for someone so well-suited for heartthrob status. His first big American role was as Tom Hanks’ lover in Philadelphia, he played a bisexual vampire and a mental patient with weird sex fantasies in Tie Me Up! Tie Me Down! He mixed those with standard Latin lover types (Zorro, and even the voice of Puss in Boots). But at 59, he looks comfortable playing a man past his prime but still aware of his human frailties. There’s a delicate, even feminine quality to his performance without devolving into camp. He exudes sadness but not self-pity. (The film’s most devastating line — “I’ve disappointed you simply by being who I am; I’m sorry” — isn’t played as mawkish, but as a genuine apology from son to mother.)

Like 8½ — and even its musical adaptation Nine, in which Banderas played on Broadway — a key character turn revolves around a childhood crush, but it’s played quickly and late, and many other autobiographical details seem added at the expense of the “big” ones. Still, with Banderas anchoring the emotions, Pain & Glory succeeds. 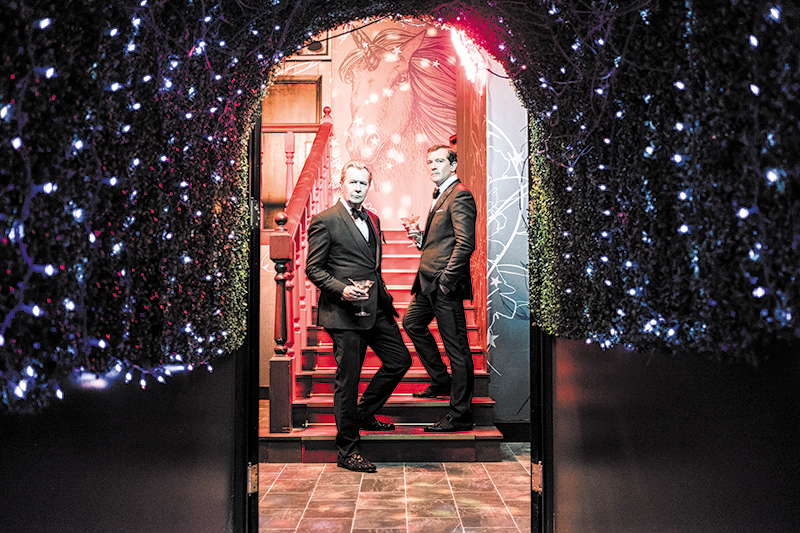 A very different side of Banderas is evident in The Laundromat, his second film opening this month. Itself a pastiche, this dark comedy from director Steven Soderbergh is sort of Ocean’s 11 as filtered through The Big Short.

Housewife Ellen Martin (Meryl Streep) becomes a widow when the boat she and her husband are sailing in capsizes. She sues the captain’s insurance company, only to learn a series of shady financial transactions between Caribbean nations has left the company virtually judgment proof … and Martin determines to find out how this could possibly be legal.

At least, that’s the conceit. Martin is a fictional construct, though Banderas and Gary Oldman play all-too-real men: Fonseca and Mossack, lawyers whose Panama-based firm set up hundreds of thousands of shell corporations to launder money, evade taxes and shield super-rich clients from personal responsibility. (The release of their documents in 2015 became the scandal known as the Panama Papers.)

The tone, like many of Soderbergh’s caper films, is hip and jokey. Oldman and Banderas are mostly seen addressing the camera dressed in extravagant formalwear, the epitome of unreliable narrators, justifying their gray market dealings while sipping Dom Perignon on sandy beaches. “Don’t shoot the messengers!” is their attitude… although the messengers also happen to be the perps.

It’s a stylized film to be sure and, like Pain & Glory, piecemeal in its structure; huge swaths of plot have seemingly little to do with Streep, Oldman or Banderas. And while it doesn’t all coalesce (the ending becomes a virtual PSA for demanding tougher banking laws for the one-percenters), it’s more human and less wonky than The Big Short or Margin Call, and the main cast are all charismatic. It’s smarmy, but in the best way.