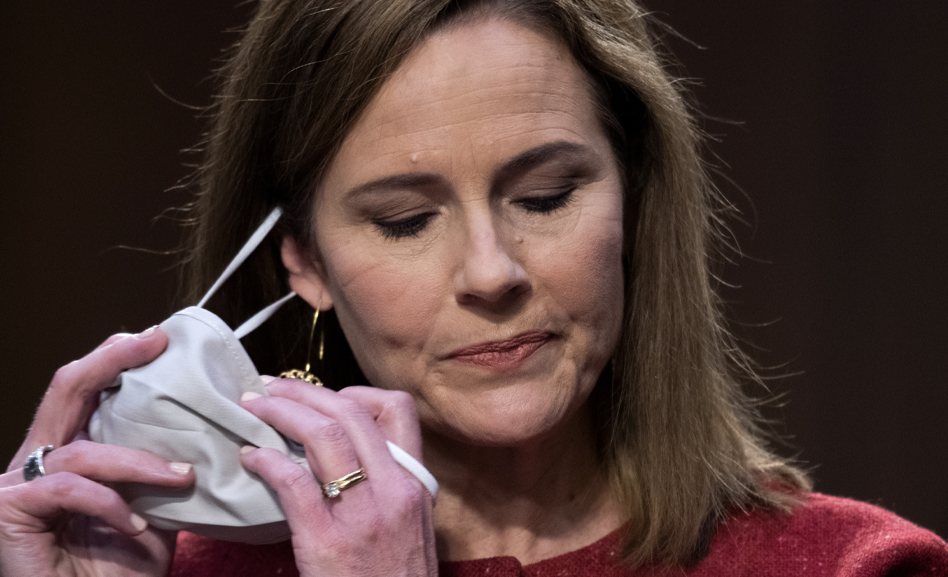 Supreme Court nominee Amy Coney Barrett removes her face mask as she arrives for the second day of her confirmation hearing before the Senate Judiciary Committee on Capitol Hill in Washington, Tuesday, Oct. 13. (Tom Williams/Pool via AP)

LGBT issues were front and center in Day Two of the confirmation hearing for U.S. Supreme Court nominee Amy Coney Barrett, with Democrats and even a few Republicans attempting to clarify how she might approach such issues on the high court. And though Barrett betrayed little Tuesday, Oct. 13, of what she might be expected to do on same-sex marriage or transgender access, she caught the attention of many when she referred to LGBT people as having a “sexual preference.”

When U.S. Sen. Mazie Hirono, D-Hawaii, criticized her later in the hearing, noting that “sexual preference is an offensive and outdated term,” Barrett apologized.

Barrett replied that she “certainly didn’t mean and would never mean to use a term that would cause any offense in the LGBTQ community.”

Sen. Patrick Leahy, D-Vermont, questioned Barrett’s association with the Alliance Defending Freedom, a national group that has mounted numerous lawsuits seeking to reverse legal protections for LGBT people, many of which have been appealed to the Supreme Court. Barrett accepted five invitations to speak before the organization.

“Whether you believe being gay is right or wrong is irrelevant to me,” Leahy said, “but my concern is you worked with an organization that is working to criminalize people for loving a person that they are in love with.”

Barrett said her presentations concerned “regionalism” and that she was speaking to a group of Christian law students. “I did not read all of the materials the students were given to read,” she said.

“And you agree with that stare decisis?” Leahy continued. Stare decisis is a legal principle that holds courts should decide disputes based on prior decisions. Barrett said it would be inappropriate for her to “give a thumbs up or thumbs down on a particular precedent.”

The Obergefell decision came up time and time again during Tuesday’s hearing. Senate Judiciary Committee Chairman Lindsey Graham, R-SC, was the first to bring it up as he led off the first round of questions. After questioning Barrett about abortion and guns, he asked her, “What’s the case that established same-sex marriage as the law of the land?” Barrett answered Obergefell.

And when Graham asked Barrett what would happen if some state “tried to outlaw same-sex marriage” now, she replied that if a case challenged Obergefell, it would have to go through the lower courts first, “And the most likely result, would be that the lower courts, who are bound by Obergefell, would shut such a lawsuit down and, it wouldn’t make its way up to the Supreme Court.”

U.S. Sen. Dianne Feinstein, D-Calif., the committee’s ranking minority member, talked about a well-known activist couple in San Francisco — Del Martin and Phyllis Lyon — and noted that Lyon had been denied Social Security survivor benefits when Martin died in 2008 because of DOMA. Feinstein noted that Barrett has said that the legal philosophy espoused by then Supreme Court Justice Antonin Scalia — for whom Barrett clerked — “is your philosophy.”

“Do you agree with Justice Scalia’s view that the U.S. Constitution does not afford gay people the fundamental right to marry?” Feinstein asked her directly. Barrett answered by reiterating something she said; “You would be getting Justice Barrett, not Justice Scalia.”

She continued, “So I don’t think that anybody should assume that just because Justice Scalia decided a decision a certain way, that I would, too.” Then she tried to side-step the question, saying that it would be in appropriate for her, as a nominee, to “embrace or disavow Justice Scalia’s position … on any point of law.”

Feinstein, in uncharacteristic form, did not let Barrett off the hook: “Well, it’s a rather fundamental point for large numbers of people. I understand you don’t want to answer these questions directly, but you identify yourself with a justice that [was] a consistent vote to roll back hard-fought freedoms and protections for the LGBT community. And what I was hoping you would say is that this would be a point of difference where those freedoms would be respected, and you haven’t said that.”

Even Texas Sen. John Cornyn, the Republican currently in a hard-fought campaign against Democratic challenger MJ Hegar, brought up LGBT issues. He noted that President Trump’s first Supreme Court nominee, Neil Gorsuch, had been attacked during his confirmation hearing for his “unwillingness to make a prior commitment on LGBT issues,” but that Gorsuch eventually “wrote the Bostock case extending Title VII of the Civil Rights Act to gay or transgender individuals. Obviously, those predictions were wrong.”

Cornyn then brought up Obergefell, noting that it allowed same-sex marriage but adding that “part of that struck down the Defense of Marriage Act, correct?”

Barrett replied, “Yes, I believe so.” But they were both wrong. Part of the Defense of Marriage Act was struck down in 2013 in U.S. v. Windsor.

“That was a bill that Joe Biden voted for?” asked Cornyn asked Barrett, who answered, “I don’t know.” said Barrett. Cornyn, in what seemed like a little electioneering for Trump’s presidential re-election campaign, responded, “I do. Joe Biden voted for it.”

Cornyn was not the only senator trying to score political points for their party. Nearly every senator did, including the Democrats.

Sen. Sheldon Whitehouse, D-R.I., spent all of his 30-minute time allotment laying out evidence of “an orchestrated campaign by conservative Republican groups to influence the selection of justices with the stated objective and plan” to seek reversal of Obergefell, Roe v. Wade and the Affordable Care Act.

Throughout the day, Barrett dodged questions seeking to determine her willingness to overturn Roe v. Wade or the ACA. She also said she can set aside her Catholic beliefs in deciding cases.

And when it came to questions about whether she would recuse herself from any upcoming case that might decide a conflict in the presidential election, Barrett had a well-prepared answer. She said she would “fully and faithfully” apply laws relating to recusal and will “apply the factors that other justices have before me in determining whether the circumstances require my recusal or not.

“But,” she added, “I can’t offer a legal conclusion right now about the outcome of the decision I would reach.”