Advocating at the Capitol 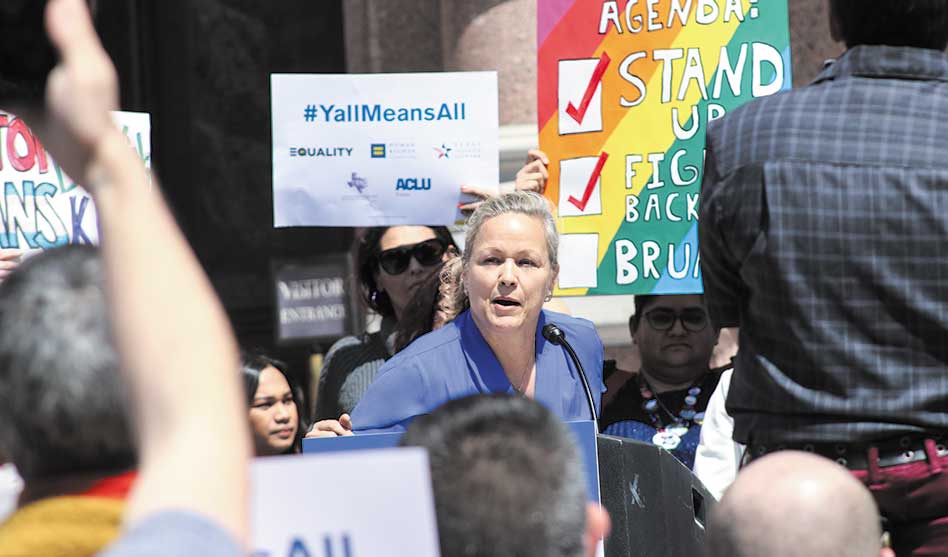 The last Texas Legislature was all bathrooms, all the time in an all-out assault on the transgender community. This session, several hundred advocates that converged of the Capitol on Monday, March 18, for All In For Equality Advocacy Day met a less hostile group of lawmakers dealing with a broader array of issues.

Equality Texas Interim Executive Director Samantha Smoot warned that although a number of the most hostile legislators were gone this session, Lieutenant Gov. Dan Patrick remains determined to include anti-LGBT language in legislation coming out of the Senate and is using stealth tactics to do so.

In many legislative offices, staff welcomed a two-page handout prepared by Equality Texas that separated the pro-LGBT bills from the anti-LGBT bills. With more than 4,000 bills filed, keeping track of which ones would help and which ones would hurt the LGBT community can be as confusing for seasoned lawmakers as well as for freshman legislators.

Advocacy Day has become a biennial tradition in Austin after beginning in the 1980s as a march up Congress Street to the Capitol to showcase LGBT visibility. The issues highlighted at the time included repeal of the sodomy law and passage of hate crime legislation. 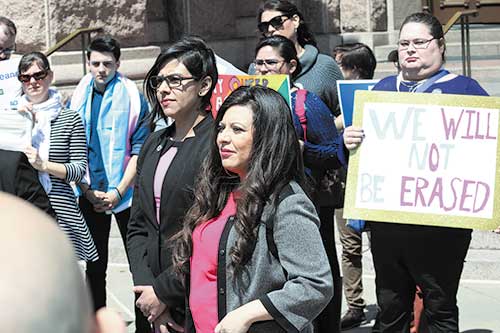 This evolved into lobbying as LGBT marchers who filled the streets in downtown Austin on a Sunday began to stay over to speak to their legislators on Monday. Although Democrats held the majority in both houses through the 1990s, lobbyists struggled to find a majority to pass a hate crime law. They worked more than 10 years before the Texas hate crimes act was signed into law.

And the sodomy law — which criminalized private, consensual sexual conduct between adults of the same gender and which was held unconstitutional by the U.S. Supreme Court in 2003 — remains on the books today.

On Monday, LGBT advocates had an array of bills to discuss with legislators, and they gathered at the First United Methodist Church on Lavaca Street, a block from the Capitol, where organizers held training sessions on advocating for equality for LGBT issues. Human Rights Campaign field organizers led the training sessions, teaching people who had come from around the state effective methods of communicating with legislators and their staff.

“Tell your own personal story,” the HRC trainer explained. “Talk about a challenge you’ve experienced.”

Before going over to the Capitol, attendees paired off to practice telling their stories and then asking for support either for a specific bill or for supporting equality.

At noon, several hundred people gathered on the south steps of the Capitol for the All In for Equality rally organized by Equality Texas, Texas ALCU, Texas Freedom Network, Transgender Education Network of Texas and HRC.

She was referring to the so-called “religious exemption” bills that have been filed. They would allow discrimination in broad categories as long as the discrimination is justified by religious belief.

One bill filed just before the filing deadline on March 15 would allow doctors and other healthcare professionals to refuse to deliver treatment because of religious objections.

“Dan Patrick has made discrimination against LGBT people a legislative priority,” Miller said.

Selena Xie, representative of the Austin EMS Association, told the crowd, “These bills go against everything I have learned and believed in.” She said as a paramedic, she was required to take classes in medical ethics that taught everyone must be treated equally.

Emmett Schelling, executive director of TENT, said, “Kids need a state where they feel safe. We can’t let our community be used for political gain.”

Angel Bonilla, the first openly-trans person to compete on The Voice, told her story and sang to the crowd.

Three of the five LGBT members of the LGBT Legislative Caucus spoke at the rally. Rep. Erin Zwiener, a freshman who is bisexual, told her story and reassured the crowd about the anti-LGBT legislation.

“None of us got here by being timid,” she said, “and we’re not going to govern timid.”

In legislative offices, LGBT advocates had the most success just handing out information from Equality Texas that separated the good bills from the bad. Even experienced legislative staffs said they were having trouble keeping track of the massive volume of bills.

Rep. Yvonne Davis has represented her Oak Cliff district since 1992. Her staff made extra copies of the handout for a group that visited her office while discussing several of the bills.

Rep. Garnet Coleman has represented his Houston district since 1991. He wrote a bill that deals with gender marker changes. Currently only judges in Dallas, Travis and Bexar counties routinely approve those corrections. Staff in his office was happy to meet a group from Resource Center. Leslie McMurray, a transgender employee at Resource Center, offered to come back to Austin on Wednesday to testify for the bill.

Resource Center Advocacy Manager Rafael McDonnell spoke to staff in a number of offices about a bill to make the so-called “gay panic defense” illegal in criminal trials. That tactic, already illegal in a number of states, allows a defendant to get away with murder by claiming the victim, who was the same gender as the defendant, made an unwanted pass at them or the defendant found out the victim was transgender.

While Rep. Celia Israel filed a bill to make it illegal to use the discredited practice of reparative therapy on a minor, Dallas County freshman Rep. Terry Meza filed a bill to add criminal penalties to the practice. She said she was hopeful for a committee hearing.

Rep. Jessica Gonzalez is one of two lesbians elected to the legislature from Dallas County. Her legislative director, Laurie Roberts, and her chief of staff, Adam Goodrum, explained many of the 28 bills Gonzalez filed and the implications they could have for the LGBT community. Some of her legislation she crafted by working with Dallas District Attorney John Creuzot.

One of those bills relates to victims of human trafficking. Gonzalez wants to deal with it by changing the emphasis in prosecution from the sex worker to the person purchasing the service. Currently there are penalty enhancements starting at the fourth arrest, and the average sex worker is arrested nine times.

Gonzalez’s bill would eliminate that enhancement.

Roberts said a disproportionate number of people prosecuted as sex workers are LGBT. Some are youth thrown out of their homes, and some are trans people fired from their jobs when they transition. They enter sex work to survive.

Other bills are designed to keep older people in their homes by adjusting the homestead exemption in designated preservation districts.

Again, a disproportionate number of LGBT community members have been involved in preserving older neighborhoods. As their neighborhoods have gentrified, taxes have increased and have become unaffordable.

Speaker of the House Dennis Bonnen promised there would be no bathroom bills this session, while Gov. Greg Abbott said such a bill wasn’t on his legislative agenda, and even Lt. Gov. Patrick said he wouldn’t pursue a bathroom bill because “we already won that battle.” And yet, Patrick is still hard at work in stealth mode to get discrimination added into Texas laws.

A bill that would take away a city’s right to write ordinances on certain subjects had specifically excluded nondiscrimination ordinances from the list. But in a Senate committee, that provision was removed.

If the bill passes, nondiscrimination ordinances would be revoked — even in a city like Dallas where protection isn’t just afforded by ordinance but in the city charter.

For trans activist Leslie McMurray’s report on her visit to Austin on Advocacy Day, and for more photos by David Taffet and Leslie McMurray, visit DallasVoice.com