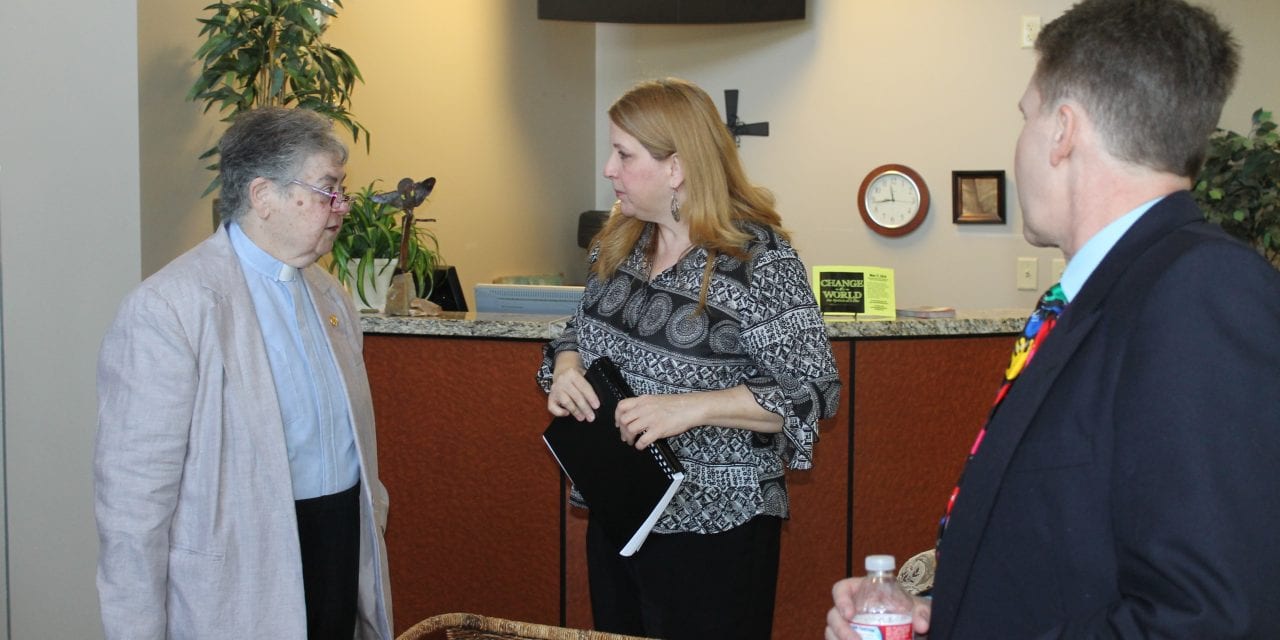 The Rev. Pamela June Webb, left, talks with Bishop Michael McKee’s assistant after she and others delivered a petition with more than 22,000 signatures urging the bishop not to bring a retired Dallas minister to trial for officiating a gay wedding. (Anna Waugh/Dallas Voice)

Christian LGBT advocates called on Bishop Michael McKee of the North Texas Annual Conference of the United Methodist Church Tuesday not to escalate a complaint against a Dallas pastor into a formal trial for presiding over a gay wedding by delivering a petition to the bishop at the North Texas Conference headquarters in Plano.

The petition, started on the website Faithful America, calls on McKee to oppose putting retired United Methodist Pastor Bill McElvaney, who’s 85 and battling cancer, on trial. It originally called for 15,000 signatures, but as of Tuesday when it was handed to Joell Stanislaus, the bishop’s executive assistant, it’d garnered more than 22,000 signatures. McKee was out of the office in meetings, but Stanislaus said she would make sure he received it.

McElvaney, emeritus pastor at Northaven United Methodist Church, married longtime gay couple Jack Evans and George Harris on March 1 at Midway Hills Christian Church. The celebration took place at Midway to prevent Northaven and its current pastor from coming under attack for allowing the ceremony to take place there. McElvaney announced in January that he disagreed with the Methodist Church about same-sex weddings and he’d officiate at them.

The parties will meet for a joint resolution to discuss how to replace the issue, ranging from anything from suspending McElvaney to defrocking him if the bishop files charges to take his case to trial. While ministers have been defrocked after a trail before, some bishops have come out publicly that they would not try ministers for wedding same-sex couples. McKee has not.

Shelbi Smith, a junior at Southern Methodist University and co-president of the college’s of LGBT group Spectrum, said as a Methodist she was told growing up that the church is a vehicle to spread love but that homosexuality isn’t compatible with the church’s teachings. But over time, she came to accept her sexuality and realize the church’s mission as to love everyone, including LGBT people.

“It’s about much more than this one case. We need Bishop McKee to follow Bishop McLee’s example of New York to not try the case,” Smith said. “We need that vocal leadership from him if we want to promote leadership in the church.”

McElvaney has asked that people let the process with the bishop play out, asking for “no other response” to the bishop’s letter informing him of the complaint.

Northaven Pastor Eric Folkerth took to his blog this morning to voice his concerns about Faithful America and condemning the action against McElvaney’s wishes.

“‘Faithful America’ has done this, despite the fact that Bill specifically asked for people to take no action on his behalf,” Folkerth writes. “Given all of this, the only assumption I can draw is that “Faithful America” either never bothers to ask, or really doesn’t care, about the actual people involved in their stunt-like escapades. To my knowledge, they have not contacted anyone directly involved with this ‘action.’”

The Rev. Pamela June Webb, an out retired minster and a member of Midway Hills, said she attended the petition delivery because she wants the Methodist Church to become completely affirming of the LGBT community.

“This has been a very important part of my vision, and my hope for the churches to come together and to be more than affirmative,” she said. “ The church’s theme is to have an open door and open hearts and yet so many of the people who could use their love are feeling rejected. So we are praying for the future of the church.”