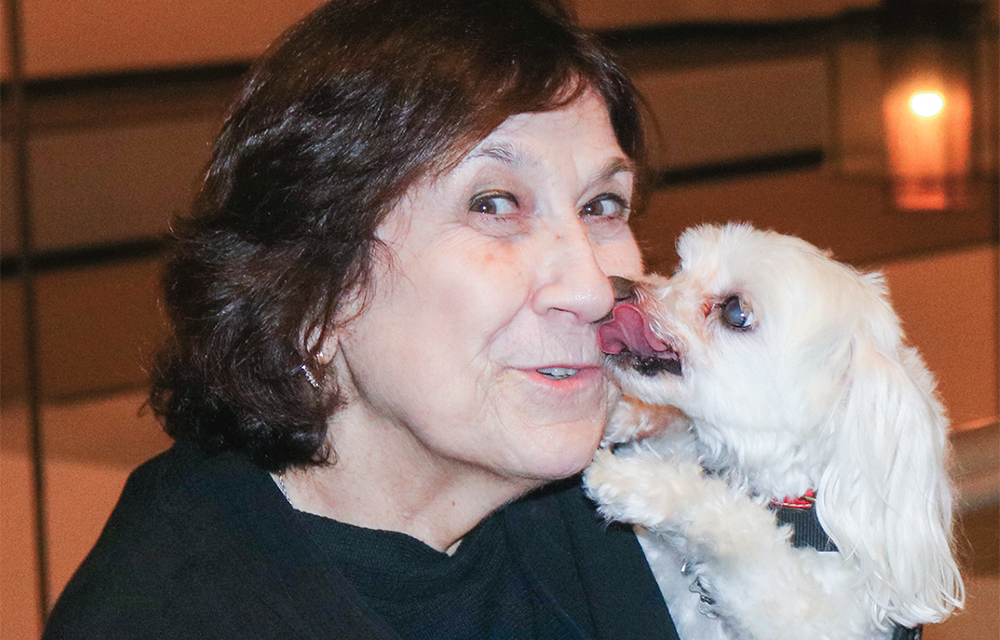 Evie Litwok, the lesbian daughter of Holocaust survivors who ended up in federal prison, doesn’t think her story is that important. What she wants people she meets to focus on is her work on mass incarceration since her release.

But her own story is fascinating, and her work with the formerly incarcerated is important.

First, a little about Litwok’s background: Her father was rescued when U.S. troops liberated Dachau concentration camp. Her parents made it to the United States. In college, she majored as a concert pianist and eventually became a Wall Street money manager. She said her musical ability carried over into her ability to see rhythms in the stock market.

In 1997, Litwok was arrested on mail fraud and tax evasion charges. The problems started when she hired someone who stole millions from her. But her employee went to police first, got immunity and left Litwok vulnerable for prosecution. Prosecutors took 12 years to bring her to trial.

“They wait until you’re out of money,” she said.

Then they threatened that if she didn’t take a plea deal, they’d go after her parents — even though her parents had nothing to do with her business. Three prosecutors refused to take the case, but a fourth finally did. He knew he had a weak case but still got a conviction. But after almost two years in prison, Litwok was exonerated. But one charge remained, and she was rearrested after her release. That case was dropped but only after she spent another year in prison, including time in solitary confinement.

“I didn’t think I was going to live through solitary,” she said.

Litwok said that according to Williams Institute, 10 percent of incarcerated men and 42 percent of women report being sexual minorities. Currently, 2.3 million people are in confinement. Another 6 million people are under mass supervision — some form of parole that restricts their movement and even prevents people from getting jobs.

According to a study in New York City, it costs $337,000 to house a prisoner, and New York spent $420 million to re-arrest and re-incarcerate 35,000 people on technical violations.

Re-entry, Litwok said, is the important thing to concentrate on. Work on facilitating a prisoner’s re-entry into society needs to begin while they are still in prison. Once she got back on her feet — with the help of a well-known LGBT activist — Litwok decided to help other people leaving prison. Based on her own experience, she knew people needed a place to live; until another person stepped in to help, Litwok was living in shelters.

People coming out of prison also need phones, so if they apply for a job, they can be contacted. They also need food and they need clothing.

Litwok said when she was released, she was given a bus ticket back to New York and $30. After struggling for a year, Litwok got a studio apartment. She said it was a luxury to lock the door and feel safe.

That’s when she was able to start helping other women.

When she’s introducing herself, she says, “Hello. I’m Evie Litwok, and I’m formerly incarcerated.” She said that makes many people uncomfortable, while others are fascinated.

Litwok has started a new non-profit organization called Witness to Mass Incarceration and is working on what she calls the Suitcase Project. A “suitcase” contains tools people need to survive their first year out of prison — a computer, a phone with minutes for a year, gift cards for food, clothing and public transportation and a place to live.

She said when people meet her, they want to know what they can do about mass incarceration. Going to a protest or calling your elected officials might make you feel good, but in truth that changes nothing. She tells people to donate to a suitcase, because those items make a difference in people’s lives.

After helping her first three women, Litwok got requests from 135 others. That’s when she realized she couldn’t just help one person at a time and needed more people involved.

She has spoken to a number of New York City council members about diverting some of their discretionary funds to her suitcase project. New York’s own figures show it costs more than $300,000 for just one incarceration, and millions of dollars are wasted each year confining people who hadn’t committed another crime, just made a technical violation like showing up late for a parole visit.

So she’s asked for just $30,000 each for 12 suitcases and has identified a dozen trans women of color she said are vulnerable and would benefit.

Another component Litwok is working on is a job bank. When Litwok was released, the only job offered to her was in construction. Those jobs are great for people in their 30s, but for a woman in her 60s who has trouble standing for long periods — not a possibility. “It takes out-of-the-box thinking,” she said, to find the right job for each person.

Litwok is in Dallas this week and presented a day-long institute on mass incarceration at the Creating Change conference taking place through Sunday, Jan. 19 at the Sheraton Dallas hotel.  █