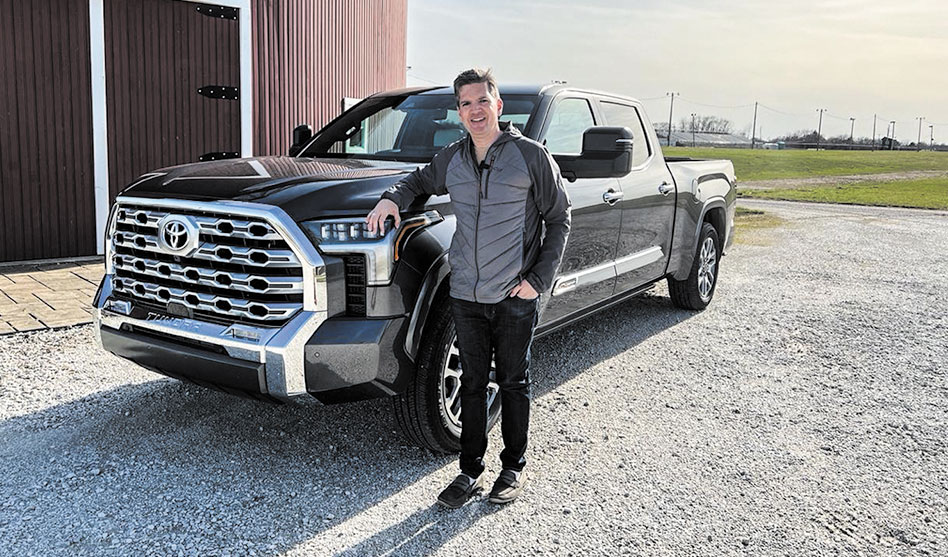 I’d like to believe the 2022 Toyota Tundra 1794 takes its moniker from the year a hearty bunch of patriots staged their Whiskey Rebellion against revenuers. They’re my kind of people. But it’s more likely a nod to the Tundra’s assembly location near San

Antonio, that’s built where a ranch was founded in 1794 by Juan Ignacio de Casanova on land given him by The King of Spain.

Either way, it wears its brand well.

Recently redesigned, this Texas-sized pickup flaunts a towering chrome grille, squinty LED headlamps, chiseled fenders and long cab. At the aft end is an aluminum-reinforced composite bed that is a bit lighter, but should also stand up to a beating. Press the tailgate button to deploy it, and you’ll find a step for climbing into the bed with LED lights and sliding anchors to secure cargo. 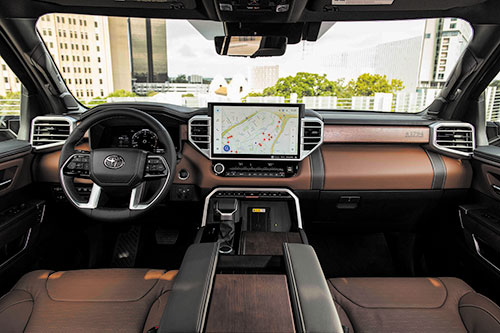 The interior was clearly crafted for the ranch owner, not a ranch hand. Cream beige leather seats are heated and ventilated front/rear, but probably aren’t the best color for those slogging hay and tromping mud. Real wood graces the dash; 12-speaker JBL audio fills the cabin with sound, and a twin-panel sunroof lets in the light. Rear passengers luxuriate on a couch with ridiculous legroom.

But, that’s not what you notice upon entering: Smack in the middle of the contrast stitching and timber is a 14-inch infotainment screen with a gigantic volume knob beneath. Connect devices via wireless Apple CarPlay and Android Auto; keep them humming with wireless charging in the forward console. A flatscreen gauge cluster and 10-inch color heads-up display keep drivers focused ahead.

Drivers get more assistance from the extensive suite of safety gear. Key are automatic emergency braking with pedestrian detection, lane keep assist, blind spot alert and rear cross path detection. Add to that adaptive cruise control, lane tracing steering and a trailer brake controller. And a trailer back-up guide helps berth nearly anything — up to 11,000 pounds of RVs, boats or other weekend toys.

Toyota proves full-size trucks don’t need V8 engines. Our Tundra ushers its substantial self with a 3.5-liter twin-turbo V6, delivering 389 horsepower and 479 lb.-ft. of torque to move out quickly … or heavily. All of that routes to the four-wheel-drive system through a super smooth 10-speed automatic transmission. Tread lightly to enjoy an impressive 17/22-MPG city/highway. 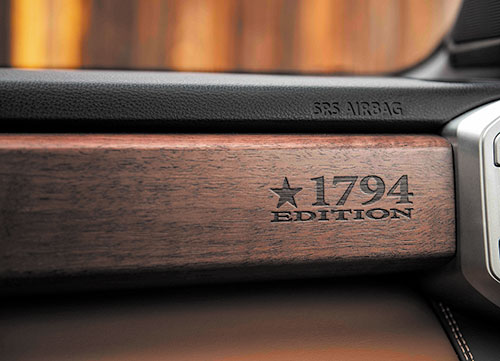 For even more performance, choose the new hybrid version with 437 horsepower, 583 lb.-ft. of torque, and a couple more MPGs.

This Tundra is the most pleasant pickup I’ve ever driven. The mirrors are too big for daily driving, and it feels absolutely huge even on open Interstate, but the powertrain is a delight. And that may not be the best part as the truck rides on an air suspension that can be raised/lowered for off-roading or entering, but drive modes configure the suspension, steering and throttle from wafting comfort to sport truck.

I found Normal mode the best for controlling bobbing and swaying without being harsh.

Anybody who owns a Toyota Tundra 1794 will feel like Spanish nobility (or like kicking off a small rebellion), even if they are just getting to the office or a state park. Wherever you roll, you’ll do it with ample power and plentiful comfort for all of life’s activities.
That’s reflected in the price, though: Tundras start at $35,950, but ours came to a lofty $66,395. Competitors include the Ford F-150 King Ranch, Chevy Silverado High Country and Ram Limited Longhorn.