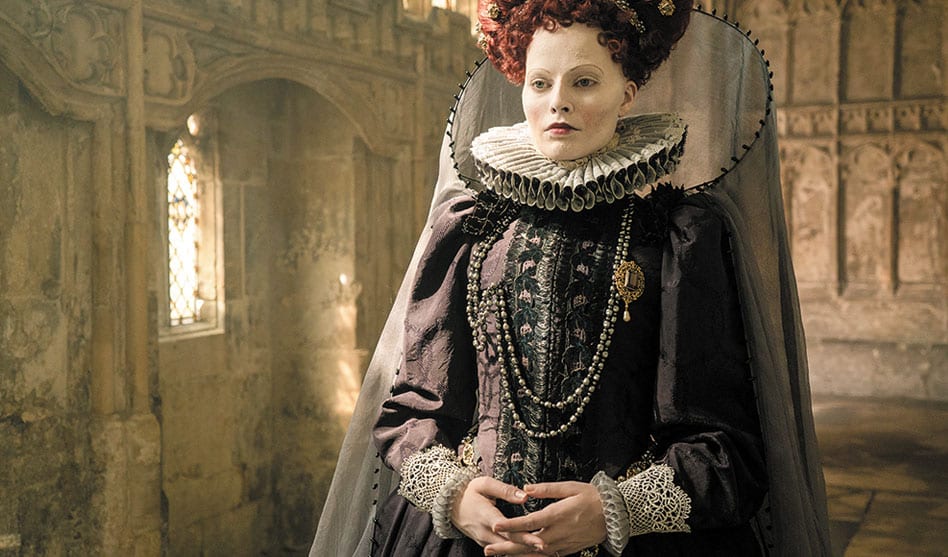 After a fierce, Oscar-nominated turn as scandalous skater Tonya Harding in last year’s I, Tonya, Margot Robbie is off the ice and holding royal court as Queen Elizabeth I in Mary Queen of Scots. Exercising a power over Europe so great during the 16th century’s latter half, nothing could stop Her Majesty — not even her cousin, Mary Stuart (Saoirse Ronan).

Their vicious and ultimately deadly contention, the result of Mary’s request to be Elizabeth’s heir, is chronicled with delicious matriarchal bite for the #MeToo era, glamorous period-film beauty (those gowns!) and one very infamous beheading in director Josie Rourke’s diverse doozy of a historical drama. Beau Willimon’s screenplay also turns a tender, heartbreaking eye to Elizabethan Era queerness via Italian courtier and Mary’s friend and private secretary, David Rizzio, known in the film simply as Rizzio and portrayed by Ismael Cruz Cordova.

Ruler of the box office in films such as 2013’s The Wolf of Wall Street and 2016’s Suicide Squad as hammer-wielding warrior Harley Quinn, a role she will reprise in 2020 for a Harley-centered spin-off, Birds of Prey (and the Fantabulous Emancipation of One Harley Quinn), the 28-year-old Australian actress is a queen in her own right.

Dallas Voice: What tips do you have for drag queens looking to transform themselves into Queen Elizabeth I? Margot Robbie: [Laughs] Well, you definitely want to avoid getting smallpox — you have to really layer on the makeup to hide those pox-mark scars! So avoid that at all costs. For a drag makeover, I could give you a list of what not to do: No. 1, don’t put lead and arsenic in your makeup the way Queen Elizabeth did because, uh, it really could shorten your life. And I love that she stuck to the red hair and went with the even more vibrant color red and the more elaborate hairstyles as the years progressed.

The contrast with the white makeup, it really worked on her. Mmhmm! Serious contrasting. I mean, she had very thin eyebrows — I don’t think that’s really the style these days. Not really in vogue right now. 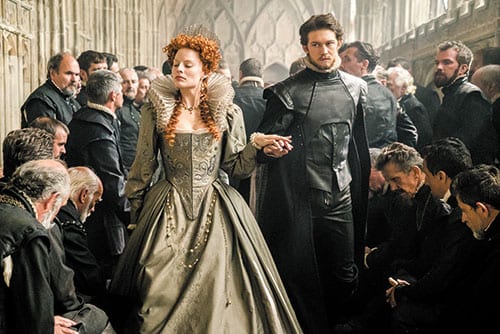 But if you really set yourself apart… Exactly. If you wanna make it clear that you’re really heading toward Queen Elizabeth, yeah, the thin eyebrows are a definite giveaway. White makeup. Fiery red wigs. And just bedazzle yourself. Jewels everywhere!

They wore their jewelry in a different way. Instead of wearing necklaces and bracelets and earrings, which they did do, jewels and diamonds and rubies were sewn into their outfits, which I thought was really amazing. Then when they would get undressed — at the end of it their ladies in waiting would undress them — the jewels would just scatter to the floor and someone would have a dustpan and sweep them up for the next outfit.

When you read the script, were you surprised by the film’s queerness? And were you disappointed that Mary got a gay “sister” friend in Rizzio and you didn’t? Yes! I was very jealous of Mary’s plot in general. I think it was actually a big part of it, that Elizabeth was more isolated. I think that was kind of self-inflicted; she had such a mistrust in almost everyone around her and had a very cynical nature out of self-preservation, therefore she isolated herself. Even with the gowns, you see over the years, as they get bigger and bigger, she’s literally keeping people at arm’s length at all times. So, I was very jealous that I didn’t have the same [relationship] as Mary and Rizzio. So very unfair!

But in terms of sexuality, the Renaissance period, they were far more fluid about sexuality, and bisexual wasn’t really a term that had to be placed on someone — it was very common for men to be married and also sleep with other men. That wasn’t something that people felt the need to label.

So that was really interesting, and then on the flip side the women at the time, particularly female monarchs, literally were a body. That was their commodity. Producing a male heir was kind of their purpose and once they had done that and achieved their purpose they were kind of swept aside. So, it was interesting to see, on one side, how liberal and open sexuality could be at the time — but on the other side, how women were seen as a commodity, and not more than a conduit for their male successor.

Shifting to your portrayal of Tonya Harding, did you know that you were playing someone who many in the LGBTQ community consider a queer icon? I did not realize that at the time. I did hear that, and I thought, “Oh, she’s got some pretty fun skate costumes!” But tell me more about that.

It’s her underdog status. Underdog status — I love that, yes. Well, as an Aussie, we always gravitate toward underdog stories, anyway, so yeah, that’s one of the reasons I played her.

Is being an underdog an Aussie thing? Yeah, yeah. Always. The country identifies itself as an underdog itself and has that mentality of fighting for your place, so I love underdog stories.

You’ve long fought for LGBTQ underdogs. You were a staunch supporter of marriage equality before Australia finally legalized same-sex marriages. You even wore a “Say I Do Down Under” shirt when you hosted Saturday Night Live in 2016. December marks the one-year anniversary of that landmark ruling. How did you celebrate the legalization of same-sex marriage in Australia last year? Honestly, I almost didn’t feel like celebrating because I was so upset that it took them that long to legalize it. I feel like when it was legalized across America that’s when I really wanted to celebrate. I thought, “Wow, this is a long way for America to come.” America, to me, holds such conservative Christian values, generally speaking, so for that to happen in America was like, “Wow, this is really a time to celebrate.”

The fact that Australia, who really does pride itself on being such a progressive nation — and it is in a lot of ways. Australia is awesome and can be so progressive, but the fact that we were so late in doing that upset me so deeply that I truly almost didn’t want to celebrate because I thought they didn’t deserve celebration.

You have a brother, Cameron, who has described himself on Instagram as “too gay to function.” Are you aware of the gay community’s interest in your brother? No! But I’m sure he would love to hear that. He’s awesome. I have two brothers and a sister, but Cameron and I were particularly close growing up. He’s always been my best friend — since he was born, really. So, he would be thrilled to hear that. He would really appreciate that.

How did he come out to you? Well, I guess that’s kind of his story to tell. I wouldn’t feel right to speak on his behalf. But like I said, he’s my best friend, as are all my siblings. I love them endlessly and always will.

Does he take you to gay bars? I’ve been going to gay bars and clubs since I got my ID — and probably long before that! There was this fantastic gay club in Melbourne, so when I turned 18 — the legal drinking age in Australia — and while I was living in Melbourne we used to always go, because on a Saturday night they would do a musical drag performance. It was always incredible. I don’t know how they would get it together every week. I don’t know where they found the time or the costumes; they had the costumes put together, the musical art, the choreography. But every Saturday night we would go to this club and just have the best time ever. And I remember they did this one musical performance about Wicked and it was just the best thing you’ve ever seen. So, I’ve been going to gay clubs ever since I’ve legally been able to go to clubs. I always have more fun.

Those queens are gonna be very proud to see you as an actual queen. Yes, I hope so!

In a Versace outfit, no less. In the most fabulous Versace outfit you’ve ever seen! I really wish that they got more screen time — I don’t think you ever get to see them — but they were incredible vintage Versace boots buckled all the way up to mid-calf.

I had read that Scorsese even brought in another choreographer, Michael Arnold, to help organize the shoot. Oh yeah! It was intricate. There was a lot going on. It was wonderful to be a part of it, though.

In August, DC Comics confirmed that Harley Quinn and Poison Ivy are married, and in 2020, you will play Harley in her own movie. For Birds of Prey, are you mindful of the way Harley is portrayed when it comes to her sexuality? Yeah. If you read the comics you know that Poison Ivy and Harley have an intimate relationship. In some comics they convey it as a friendship; in other comics you can see that they’re actually sexually involved as a couple. I’ve been trying to — I would love to have Poison Ivy thrown into the universe, because the Harley and Poison Ivy relationship is one of my favorite aspects of the comics, so I’m looking to explore that on screen.

Have you considered who you’d want as Poison Ivy? You know what? I’ve thought about it a lot and there’s no one person who springs to mind. I’m pretty open-minded.

You have your own production company, Lucky Chap, which is committed to producing female-led films. How conscious are you of LGBTQ inclusion in the films and TV shows your company produces? Our goal for the company has always been to tell female-driven content with as many female filmmakers as possible. As far as including content for the LGBTQ community, that’s a huge aspect. We make movies for audiences to love. A huge portion of the audience is a part of the LGBTQ community, so we obviously wanna make content for everyone. I don’t know if anyone could say that they don’t have someone close to them who isn’t a part of that community, so of course it’s important. It’s a part of everyone’s life; everyone’s gonna relate to those stories. We have a lot happening, actually, at the company, especially on the TV side. I’m not sure when they would actually be released — nothing’s been announced yet — but what I can say is, absolutely. We always wanna make stories for everyone.