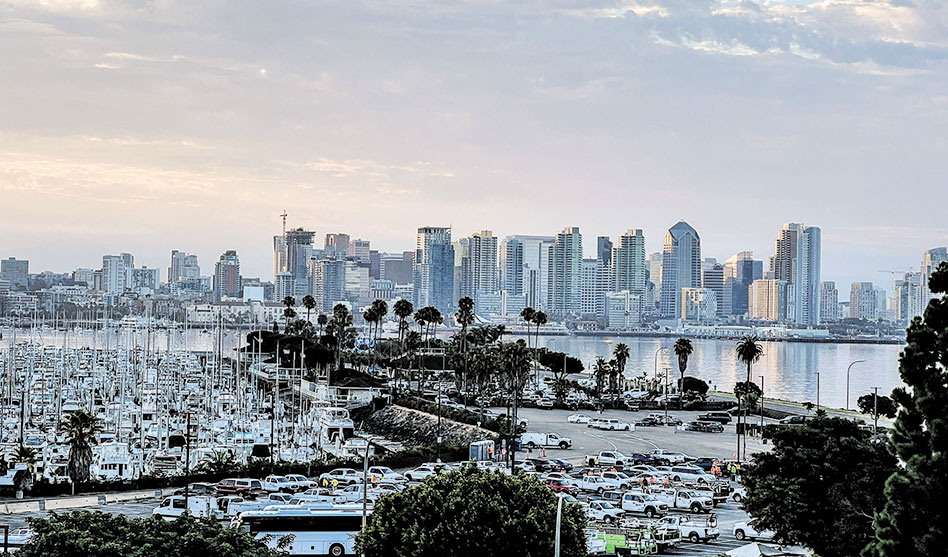 San Diego and the marina on the Harbor from Sheraton

San Diego, the eighth largest city in America and the second largest in California (at least according to LGBTQ Mayor Todd Gloria) is a city of interesting neighborhoods in valleys and mesas on the Pacific Ocean at the southern tip of California, on the border with Tijuana, Sonora, Mexico.

I had the pleasure of visiting the city during Pride weekend when more than 55,000 persons attended the parade and festival held in Balboa Park.

That iconic park, just east of downtown, features the world-famous San Diego Zoo, museums and other attractions. The Museum of Art is one not to miss.

San Diego has a perfect climate: very mild year-round with 10-plus inches of rain, so it is not as desolate nor as hot as nearby Phoenix or Las Vegas.

And you are just a short drive to Los Angeles where you can take in big city attractions. The water temperature is cool though — in the mid-60s — compared with east coast beaches.

What to do
Don’t miss the city’s Little Italy neighborhood which features the world’s best farmers’ market each Saturday. It is full of great restaurants like Ironside (try the salmon and finish it off with banana pudding). Or have desert at the Portland ice cream chain Salt and Straw. The Little Italy Food Hall is also great, with seven food court options.

After that, catch the light rail, known as the MTS Trolley, up to Old Town State Historic Park, site of California’s first settlement (the birthplace of California). There you will learn about the history of this interesting state. Don’t miss the Casa de Estudillo, and the area has several excellent Mexican restaurants.

Next head to Santa Fe Station and catch a bus up to Balboa Park, and then head onto the gayborhood, Hillcrest, where the boys are. The Gaslamp Quarter just south of downtown is also worth a visit. And you can also head out to Coronado Island and the one and only Hotel del Coronado. Then hit one of the beaches — Pacific Beach, La Jolla, Torrey Pines and more. The beaches from Coronado south were in bad shape when I was there due to pollution from Tijuana. You don’t need a car since they have a great transit system (SDMTS.com).

Speaking of Tijuana, although the light rail runs south to the border, my friends discouraged a day trip. I was disappointed since I had some left-over pesos to spend from a previous Mexican vacation. Check when you arrive and make your own decision, but it is tempting. 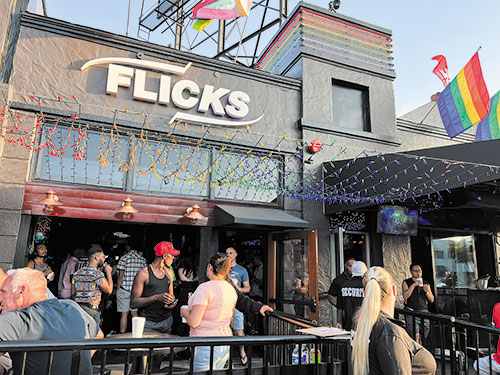 Nightlife means the Hillcrest
Most of the bars are in the Hillcrest gayborhood, which is just up the hill, northeast of downtown. The Uptown Tavern is fun, as is Gossip Girl. Try the iconic Flicks for dancing or great people watching — lots of cuties there.

Urban Mo has great food and drinks and is always packed. The Number One Fifth is another option, as is the very festive and very popular Rich’s. You will find them all on University Avenue in the Hillcrest, and they all feature outdoor seating or courtyards.

Hillcrest is arguably the best gayborhood in North America.

Where to stay
I stayed at the Sheraton San Diego Hotel and Marina on Harbor Island. It is just steps to the airport, with great paths along the harbor, and it is a short hop to the Hillcrest gayborhood as well as Balboa Park, Old Town and Little Italy.

Beware of resort fees though. I refuse to stay at hotels that charge them.

There are many hotels downtown, but I could not find any in Hillcrest proper. I have also stayed at La Pensione Hotel in Little Italy, which I liked. Rates for hotels have gone up dramatically, so check the hotel rate before you book your flight. There were several conventions in town as well as Pride going on when I was there, and the hotels were quite expensive.

Getting there and getting around
San Diego’s MTS Trolley and bus system is great. You can take Amtrak up to Los Angeles. 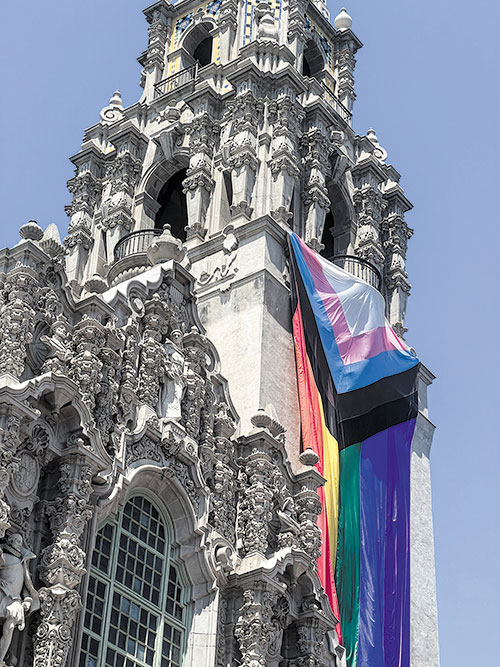 I took Southwest Airlines through Denver on the way out, which was fine although they have no chargers for your phone in the seats. My three-hour Denver wait became a four-hour wait due to a delay.

I took United on the way back, which was also nice except you must download your credit card before the flight to purchase a snack box or liquor, which is a hassle. Other than that, I was surprised how pleasant the flight was, especially since we flew over the Grand Canyon, Utah National Parks and the Rocky Mountains.

Alaska Airlines is my favorite airline, and they also have a lot of flights to San Diego. The nearby Tijuana Airport is another option, and they have a new cross border connect option where you walk over a bridge to the airport to clear customs and catch cheaper flights to Mexico and other destinations.

San Diego Airport, the largest single runway airport in the country, is close to downtown. Catch the MTS bus and save on UBER or Lyft fare. The bus is free all summer.

I could walk to my hotel, the Sheraton, which is across the street.

Note: Don’t bother with a rental car. You won’t need one to get around, and they are very expensive these days.

One final tip: San Diego does not have a bike sharing system like most cities. So leave your helmet at home.

Put San Diego down as an absolute must for your next vacation. Whatever the season, you won’t be disappointed in this interesting and fun city.

Bill Malcolm is a syndicated LGBTQ+ value travel columnist. His column is now carried in LGBTQ publications in Toronto, Seattle, Chicago and Washington, D.C., as well as in Dallas Voice. His opinions are his own; he received no free meals, hotel stays, etc. during his trip, making him a truly independent and unbiased travel writer.