A new kind of classic 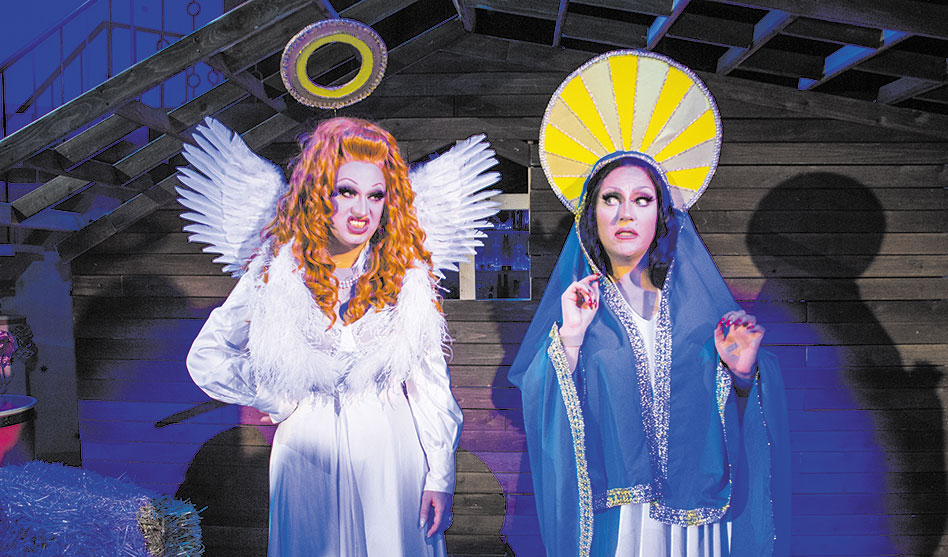 Christmas — it’s the most wonderful time of the year. Except when it isn’t. That is kind of the moral of the story in The Jinkx and DeLa Holiday Special, premiering Tuesday, Dec. 1, online at JinkxAndDeLa.com.

Filmed on a soundstage following all the COVID-19 protocols, the hour-long original film is the first film project executive produced and directed by BenDeLaCreme under her production company, BenDeLaCreme Presents. It is not, however, DeLa and Jinkx Monsoon’s first holiday show together.

“Jinkx and I have been working together for a decade,” DeLa said in a telephone interview this week, and a holiday show of some sort has been part of their schedule for years.

“I’ve actually been doing holiday shows for 14 years,” DeLa said. “I started doing holiday shows when I first moved to Seattle [in 2006] with a bunch of burlesque dancers.” And although she has always loved the classic Christmas variety show specials, like many in the LGBTQ community, DeLa said, she had a complicated personal relationship with the holiday.

“A bit part of it was that I grew up in Connecticut, with the picture-perfect Connecticut Christmases — all snowy landscapes and singing Christmas carols around the tree,” she explained. “But as a flamboyant and unique queer child, it all felt kind of empty to me. I never felt liked I belonged; I never saw myself as truly part of the whole family/homecoming thing. It made for a holiday I did not enjoy.” 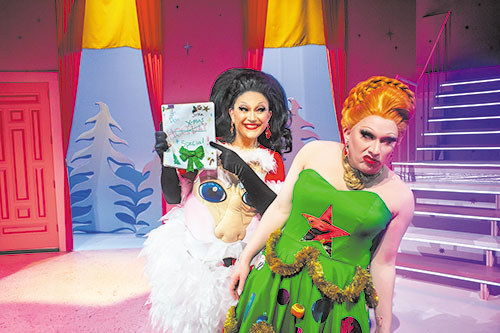 DeLa, left, loves Christmas and a classic Christmas special, but, Jinkz has a different history with the holiday. (Photo by Matt Baume)

So once she got to Seattle and began to find her own community there, “I decided to reclaim [Christmas] for myself. I decided to make it more fun for people who had a more complex and less traditional relationship with the holiday.”

Not long after, DeLa heard of Jinkx Monsoon, who was attending the Cornish College of the Arts in Seattle. “I went to see her perform, and she had a kind of skill and professionalism and humor that I had not seen in a long time. I cast her immediately in my next holiday show back then.”

That was a decade ago, DeLa said. Then two years ago, DeLa and Jinkx decided to take it up a notch and take their holiday show on the road in the form of a Christmas Tour. “This was the first time we teamed up as just the two of us and my first time producing a national tour. It was a big risk for us, but it went so well!

“The following year, it grew exponentially bigger in terms of the number of cities and venues we played,” DeLa continued. “And we went to the U.K. as well as the U.S. that year. That was my first international production credit.”

After that success, the duo had big plans for their third tour. But then came 2020 and the COVID-19 pandemic. But they refused to have their holiday squashed. “So we turned [the show] into a film,” DeLa said. “This has been a really difficult year for everyone, especially for people in marginalized communities who already felt separate. So I hope this film provides some joy and some warmth and a sense of family for the people out there, even when we can’t be together.”

DeLa said she has always been “smitten with the classic Christmas specials,” from the Judy Garland and Bing Crosby shows of old to the more modern version like Stephen Colbert’s Christmas special and even the PeeWee’s Playhouse Christmas Special.

“The premise is always that you are invited into this person’s home to share the holiday with them. In our film, Jinkx and DeLa are living on a sound stage, and DeLa wants to put on a classic Christmas special,” she explained. “But this is the story of two friends with different upbringings and different views on the holidays. Jinkx wants to use the show to make fun of Christmas traditions and tell dick jokes and drink a bunch, while DeLa is trying to hold up the Christmas traditions to a fault.”

The two friends end up in a big argument, but as is the way with holiday tales, it all works out in the end — but not before they’ve learned an important lesson. And it’s a lesson that could help many in the queer community.

“The real moral of the story is that the two of them can find common ground,” DeLa said. “They realize that their different connections to the holidays are all valid, but they also realize that the traditions of the past don’t necessarily work for everyone these days.

“Jinkx and DeLa get to come together after having this big all-out fight over what the holiday should be. But at the end, at the heart of it all, they are spending the holidays together, and that’s what really counts,” she said. “It’s like that with a lot of people in the queer community. The old traditions don’t really fit us, but it is okay for us to make new traditions of our own.

“I hope that is the bigger message that people take away from the film.”

The Jinkx and DeLa Holiday Special is a 60-minute musical special made for the screen and available worldwide on Dec. 1. The digital soundtrack featuring original songs written and composed by BenDeLaCreme, Jinkx Monsoon, Keith Harrison and Major Scales, will be released Dec. 11.The film was written by Jinkx Monsoon and BenDeLaCreme and was directed and produced by BenDeLaCreme.