A house full of love 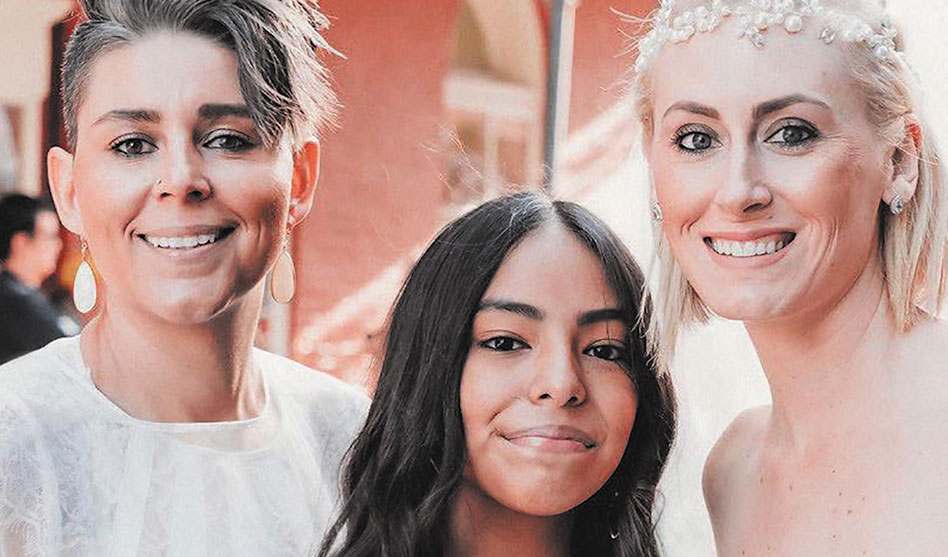 Ashley and Dandy Cutrer with their daughter at their wedding.

Dandy and Ashley Cutrer married legally earlier this year after five years as a couple. Together they’ve fostered seven children — so far.

When they first contacted Dallas Voice last year, the two were caring for four children. Those four children were returned to their mother, and the Cutrers have two different kids with them — a five-month-old and a two-year-old.

They also have a 13-year-old daughter they adopted, who has been with Ashley since she was a year old. Ashley and Dandy share custody of their daughter with Ashley’s ex.
“I always wanted to adopt,” Ashley said.

Dandy and Ashley got involved in fostering when they were buying a house and learned their lender was a foster parent. She recommended Upbring, an agency based in Austin with local offices across Texas, including one in Fort Worth.

When the Cutrers began the process in Midland, the caseworker doing the home study kept delaying, eventually telling them she “couldn’t come to our house because we’re a same-sex couple,” Ashley said. That delayed the process for several months, until finally a caseworker from San Angelo came to do the house inspection.

Still, the couple said, it could have been worse; the original caseworker could have just come and declared that they failed the home inspection, thus disqualifying them from becoming foster parents at all. The only ones who really lost out, they said, were the children who didn’t get to stay in a loving home during that delay.

But once they qualified and were licensed, Ashley and Dandy became the first same-sex couple to foster in Midland.

Then the couple moved to Justin, just north of Fort Worth, and they had to re-qualify before fostering again.

As they’ve fostered, they’ve learned quite a bit about the behaviors of children in the system. For one thing, “Certain things they say may have a different meaning behind it,” Dandy explained. They may get scared when they see a police officer. After a visit with their parents who were abusive, the children may act out in unexpected ways.

As much as they love the kids they foster and would love to keep all of them, the Cutrers said their goal, along with the goal of the state’s foster care system, is to return the children to their parents. Still, giving up the kids they’ve cared for is difficult.

They described getting the family of four as giving birth overnight. “I had 30 minutes to prepare,” Dandy said.

Typically, someone from Child Protective Services or from Upbring will call to say that they have a child or several children that need a place to stay. The potential foster parents can refuse or accept the children. If they accept, the children usually are brought over within the hour.

At this point, the children all have one thing in common: They are scared.

During the time that the four siblings stayed with Dandy and Ashley, they bonded like a family, the couple said. Then, 15 months later, the children were returned to their parents.

Both women said, giving up the children was like experiencing a death in the family. They said it might have been easier if they were able to stay in touch with the children, but, for a variety of reasons, they haven’t.

The two children they currently foster arrived on the first night of the COVID-19 shutdown. They arrived late in the day with nothing but what they were wearing, and all the stores were already closed. 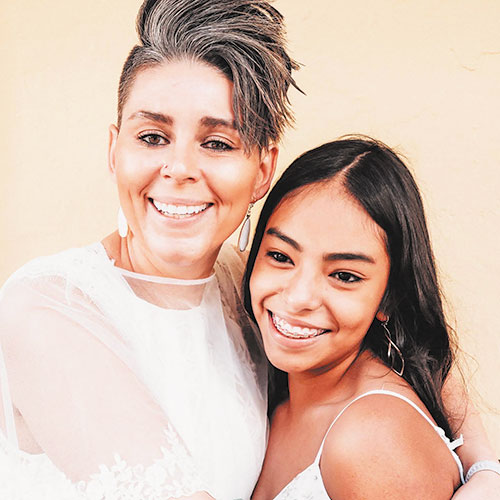 When they first completed their training, the women let Upbring know they would love to care for LGBTQ kids. As an agency, Upbring’s goal is making the best matches they can for the sake of the kids. The first foster child they had was transitioning, but, the Cutrers said, they haven’t had any LGBTQ kids since then.

When they moved to Justin, Ashley and Dandy did some homework, just in case they got an LGBTQ placement. The couple met with Justin High School administrators to introduce themselves as foster parents who may have kids placed who would go to that school.They specifically asked if there would be any problems for an LGBTQ foster child and were assured their kids would be welcomed.

Ashley encouraged anyone who’s thought about fostering to look into it by taking an orientation class “to see if it’s right for you.” While raising children can be difficult, she said, it’s been great for their relationship: “All those traumas bring you and your partner together.”

Dandy agreed. “We’re opposites,” she said. “I wear my emotions on my sleeve. You just have to have a heart for children.”

According to Upbring, singles or couples married at least two years can foster. You must be at least 21 years old and emotionally and physically healthy.

You can be employed or retired, but must have a regular source of income. You may not depend on foster care payments for expenses or be on government assistance. You must either have no criminal history or have proof of rehabilitation.

You must have no history of abusing a child or another adult.

Dandy and Ashley said their approval process took about seven months. That included the verification of their application and a background check. Then they attended an orientation meeting and classes that include CPR, behavioral intervention training and psychotropic medications and medication administration training. Finally they had to pass the home study and safety inspection.

They said they had to buy a few things for the house to pass inspection — a fire extinguisher, covers for their electrical outlets, a lock for their medicine cabinet. But they said those things are good ideas for any household with young children to have.

Their house, they said, looks just like any other house — except for one wall covered in all the required paperwork including a phone number for their foster kids to call in case they needed to report any incident to CPS.

Both agreed that giving children a safe and loving home is the biggest reward to fostering.