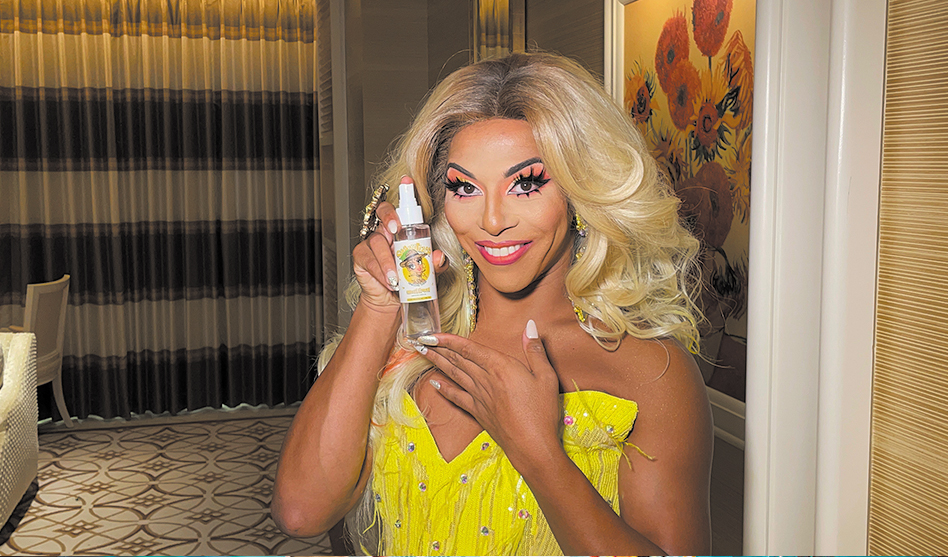 Shangela helps you keep it clean with Shanitizer.

While quarantining back home in Paris, Texas, Shangela found ways to stay active

Shangela Laquifa Wadley — aka Paris, Texas native D.J. Pierce — is a “PRO-fessional!” She even has a song that says so — “Werqin Girl (Professional).”

So when the COVID-19 pandemic cut short the first season of We’re Here, the HBO docu-series in which she stars alongside fellow RuPaul’s Drag Race alumnae Bob the Drag Queen and Eureka O’Hara, and sent her back to her hometown to quarantine, Shangela used the down time to start up a few more projects. Those include her own line of scented hand sanitizer products (“Shanitizer”) and a new program, in partnership with Spotify, called “The Halleloo Happy Hour with DJ Shangela.”

Shangela also recently guest-starred in an episode of Station 19 on ABC and in an episode of Lovecraft Country on HBO. And she hosted 12 Dates of Christmas: Unwrapped, featuring the reunion of the cast of the HBO Max reality dating show. And that’s not even mentioning the organization she helped establish, in conjunction with the Actors Fund.

When the country shut down last spring, Shangela headed home to Paris, choosing to spend most of the last nine months of quarantine staying with her grandmother, known affectionately to Shangela’s social media followers as “Grangela,” in the house Shangela bought for her. 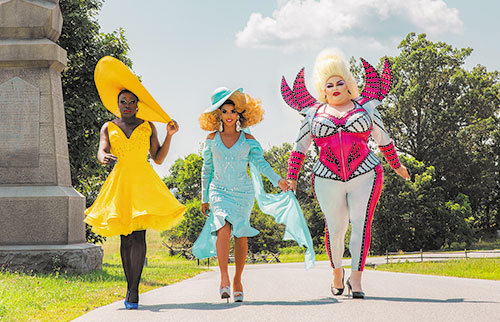 Noting that her grandmother played a big role in her upbringing, Shangela said in a television interview last week that she really appreciates having had the chance to spend so much time with her over the last year. Grangela is, she said, “82 and in a wheelchair, and she has been in a tough fight with liver cancer. I got much closer with her during the last nine months, so it was really hard to leave” to get back to work.

“We had a lot of fun this summer,” Shangela continued. We’re Here was nominated for an Emmy Award for “Best Unstructured Reality Program,” but since COVID-19 forced the Emmy Awards program to go virtual, Shangela decided to bring the red carpet glamor home to Paris.

“I set up my own red carpet in the back yard and got everybody to dress up and walk the red carpet with me,” she said. “We had a great time.”

Also during her time in quarantine, Shangela has teamed up with Spotify to create her new podcast, The Halleloo Happy Hour with DJ Shangela. The show combines some of Shangela’s favorite music with interviews with some of her favorite people.

The new podcast kicked off Oct. 14 with a show featuring Shangela’s We’re Here co-star Bob the Drag Queen. Since then, a new podcast has dropped almost every week — they skipped Thanksgiving week — with each one featuring a different guest star, including trainer and fitness expert Shaun T, singer/songwriter Meghan Trainor and activist Eliad Cohen. Upcoming podcasts with feature composer Mark Shaiman and ’80s icon Tiffany.

But, Shangela said, “my favorite new project” has been her new signature line of scented hand sanitizers called Shanitizer.

“I am a working girl, you know! Shangela is a pro-fes-sional! I am always looking for my next project, and I am just so thankful that I have people around me who support me in some of these crazy ideas I have,” she declared.

Obviously, since we are living in the middle of a pandemic, keeping our hands clean is a top priority, and hand sanitizing products have taken on great importance. Shangela said that just like everyone else, she has been using a lot of hand sanitizer over the last year, and she noticed that “my hands always smelled like tequila!” So she got the idea to team up with Spirits Lab, who “helped me produce a line of hand sanitizer that smelled good but are still effective — Shanitizer!”

After going through about 100 different possibilities for scents, Shangela and Spirits Lab settled on three different options: Hallelemon “smells like a fresh cup of lemongrass tea, brewed to perfection,” while Sugar Daddy “smells like a sweet and airy swirl of strawberries and golden baked shortcake.” Then there’s ProFRESHional, which “smells like a clean blend of lush line-dried linen and fresh open air.”

You can purchase Shanitizer online at Shanitizer.com, where the different scents are available for $10 per single 4-ounce spray bottle, or $27 for a three-pack of either all one scent or one bottle each.
And here’s the kicker: $1 from the purchase of each bottle goes to fun another of Shangela’s quarantine projects: Feed The Queens.

“I am always on the go, and I have always been a ‘save money for a rainy day’ kind of person. When you grow up with not a lot, you learn that when you are making money, you always put some aside for the times when you aren’t making as much,” Shangela said.

“But there are a lot of queens, a lot of drag entertainers, who saw their work, their way of making money, just completely shut down this year,” she continued. “When the bars and the restaurants and the theaters had to close down, a lot of them lost their only means of income. And there were no organizations directly helping the drag queens. They had no checks, no money coming in to buy food. So I asked myself, how can I help? What can I do?”

What she did was to work with The Actors Fund to establish Feed The Queens, an organization that has, Shangela explained, already distributed some $100,000 in the form of $400 food grants to 250 drag entertainers in need.
“When you hear these stories from your fellow drag entertainers, it really touches your heart,” she said. “And this is not just me helping; it’s all of us coming together to help people who need help.”

To donate to Feed The Queens or to apply for a food grant, visit FeedTheQueens.com.

But now Shangela’s time in quarantine is coming to an end. She returned to Los Angeles last week and, with all the proper safety procedures in place, she and her We’re Here family are getting ready to start filming Season 2 of the wildly popular and unexpectedly moving HBO docu-series.

“I am happy to be back at work, and I am so thankful for IVC and HBO being committed to this show and to everyone being able to work safely,” she said. “Me and Bob and Eureka are back again to travel across America, finding these people and helping amplify their stories in these conservative spaces. And as you can see from the recent elections, we have a lot of work to do! We want it to be bigger, with even more sparkle in the second season.

But you will see all the social distancing and other measures we will be taking to protect everyone.

“This is a real-life series, so it will reflect what’s going on in the world right now. And if you thought Season 1 was something, just wait til you see Season 2!” Shangela declared. “And stay tuned to your girl; I am gonna continue to work and create and do what I can to make things better for our community.”