A city of contrasts 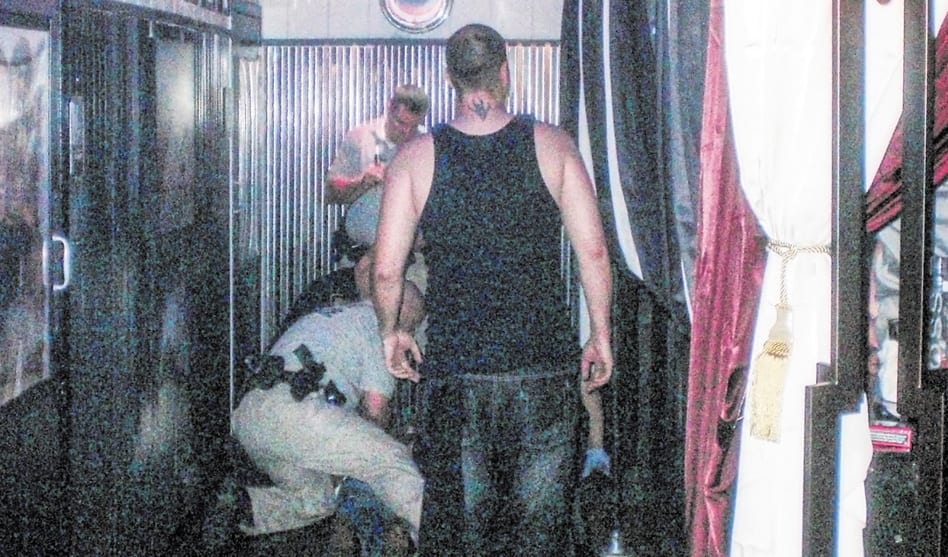 This iconic photo taken by Chuck Potter during the Sept. 28, 2009, raid on the Rainbow Lounge allegedly shows the arrest of Chad Gibson, the patron who suffered a severe head injury that left him hospitalized.

10 years after the Rainbow Lounge raid, where is Fort Worth now?

When I talk to my students about civil rights, there are always noticeable gaps in their base knowledge level once the conversation moves past Martin Luther King, Rosa Parks and the basic story of black-white segregation.

Many don’t know about the Stonewall Inn or the national gay rights movement, and most are unfamiliar with the Rainbow Lounge raid, a joint raid by Fort Worth police officers and agents with the Texas Alcoholic Beverage Commission on a then-newly-opened gay bar on Jennings Street in Fort Worth.

The raid took place in the wee morning hours of June 28, the actual 40th anniversary of the Stonewall riots. Several people were arrested inside the bar, and one young man, Chad Gibson, ended up in the hospital with a serious head injury incurred while in custody. Some said he fell and hit his head on the sidewalk outside after being handcuffed and taken from the bar, while others said he was injured when officers inside the bar grabbed him and threw him to the floor.

Although the incident made headlines around the world, this local event is not typically taught in high school classes, and I would dare say that many of my colleagues at the college level don’t teach it either.

It would be too easy for me to get frustrated with the public school teachers for not teaching about this local event, but then I remember my own secondary education. Growing up as a black kid in Oklahoma, I never learned about the Tulsa Race Riots or any local minority rights history until I went to college.

The truth is, our education system has a real blind spot when it comes to learning about local history and politics. Municipal civic issues will never show up on a national test like the SATs, ACTs or advanced placement exams. And they can’t be covered on standardized tests that kids across the state will take. So, it is not surprising that my students have no frame of reference for local civil rights activism.

And that’s a real shame, because this incident is not only an important piece of local LGBTQ rights history, it is also an example of how a city properly responds after the protests and rallies end, and after the national media has moved to the next story.

Since the 2009 incident, Fort Worth has made measured strides to be more inclusive of the LGBTQ community. It is not a stretch to say the city has come a long way in 10 years.

City leaders have spent 10 years saying the right things in meetings and forums to create the sense that this is a community that cares about its non-heterosexual residents.

The city expanded its anti-discrimination policies to include gender identity (sexual orientation has been protected since 2000); city officials and all police personnel have had to attend mandatory cultural sensitivity training, and there is a task force and LGBTQ police liaison officer. And after the Pulse nightclub shooting in Orlando, FWPD went to gay clubs in Fort Worth to get a better understanding of the physical layout of the buildings so they could be prepared in case any emergency came up.

These are concrete, forward-thinking ideas that exemplify how much the city wants a positive relationship with the Tarrant County queer community.

These smaller, day-to-day actions — the minutiae of governing, if you will — won’t show up in history or government textbooks. We often don’t see that for every big march, rally, riot or protest, there are hundreds of post-event hours dedicated to turning words into actionable plans.

The city has done so much that on the 2018 Human Rights Campaign’s Municipal Equality Index, Fort Worth scored a 100. That is the highest score of any conservative city in Texas. To put that in comparison, it is on par with Dallas, while Denton scored a 52 and Waco a dismal 22.

Recently, I was fortunate enough to attend an LGBTQ Community Police Forum hosted by the non-profit One Safe Place, a forum that came about because interim Fort Worth Police Chief Ed Kraus was concerned the LGBTQ community was fearful after the recent murders of trans women in Dallas.

The room was full of the city’s top law enforcement brass, leaders from local LGBT community groups and a few owners of gay-oriented businesses.

The consistent message given from Chief Kraus and Councilwoman Ann Zadeh was that Fort Worth is a city that is open, welcoming and protective of all citizens.

Sitting in that room, I believed every word was sincere. And I believed it because the city has taken those words and spent the last 10 years turning them into policy.

That’s not to say there isn’t work to still be done. City health benefits still don’t cover most transgender-associated medical costs. And Kamika Anderson, a lesbian city water department employee, has a lawsuit against the city for on-the-job sexual assault and harassment.

I don’t know if all of the hard work and collaboration between the city and the non-profits have trickled down to the average citizens, either LGBTQ or straight. I don’t know if the city isn’t touting its success loudly enough or, as is often the case, if news of the queer community in Fort Worth is sidelined in favor of more sensational Dallas issues.

Good government is rarely news worthy. And if you want further proof that the message isn’t getting out, that community forum that I attended was largely government officials talking to organizational leaders. The public was not there to hear Chief Kraus’ message.

When Finn Jones, executive director of Transcendence, says his last trans support group had 60 trans men and women there fearful for their lives and asking about self-defense classes and CHL licenses, the message isn’t getting out.

When I hear in online queer groups time and time again that Dallas neighborhoods are more welcoming to non-hetero families, the message isn’t getting out.

As someone who advises young queer college kids, I can tell you that many of the young gay and trans kids in Tarrant County are plotting their escapes to Austin and Houston, because they think their home town won’t accept them for who they are. My queer students are taking their talents to other cities because they think they can’t be employed and be open about who they are in Tarrant County.

Election after election, Tarrant County sends a mostly-Republican delegation to the Texas State Legislature. And those locally-elected officials are co-sponsoring and voting for anti-LGBT bills that still hinder full equal treatment of the queer community. Of the 15 House and Senate members that represent the county, support for SB 1978, the Save Chick-fil-A religious bill, was an overwhelming 11-4 along strict partisan lines.

It creates two different and conflicting messages: There are the progressive actions of the local officials contrasting with the conservative votes in the Legislature and actions of the general public.

I don’t know which one represents the true Fort Worth, but I think in the next 10 years, we’re going to find out.

Aubree Calvin is an Assistant Professor of Government at the Northwest Campus of Tarrant County College.