A city in flux 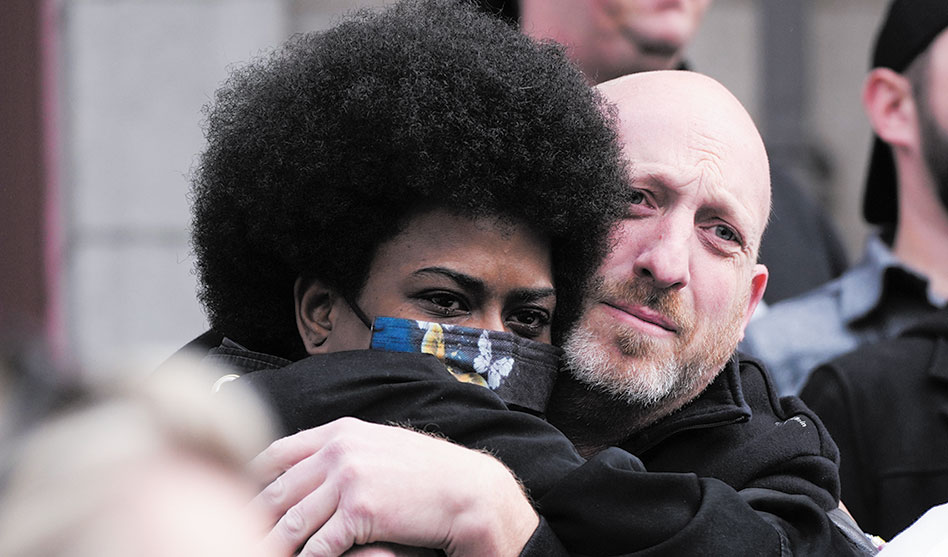 Nic Grzecka, right, co-owner of Club Q, hugs a supporter after a 25-foot historic pride flag was unfurled to cover the exterior of City Hall to mark the weekend mass shooting at the gay nightclub on Nov. 19. (David Zalubowski/Associated Press)

COLORADO SPRINGS, Colo. — When officials unfurled a 25-foot rainbow flag in front of Colorado Springs City Hall last week, people gathered to mourn the victims of a mass shooting at a popular gay club couldn’t help but reflect on how such a display of support would have been unthinkable just days earlier.

With a growing and diversifying population, the city nestled at the foothills of the Rockies is a patchwork of disparate social and cultural fabrics. It’s a place full of art shops and breweries; megachurches and military bases; a liberal arts college and the Air Force Academy.

For years it’s marketed itself as an outdoorsy boomtown with a population set to top Denver’s by 2050.

But the Nov. 19 shooting at Club Q has raised uneasy questions about the lasting legacy of cultural conflicts that caught fire decades ago and gave Colorado Springs a reputation as a cauldron of religion-infused conservatism, where LGBTQ people didn’t fit in with the most vocal community leaders’ idea of family values.

For some, merely seeing police being careful to refer to the victims using their correct pronouns after the shooting signaled a seismic change. For others, the shocking act of violence in a space considered an LGBTQ refuge shattered a sense of optimism pervading everywhere from the city’s revitalized downtown to the sprawling subdivisions on its outskirts.

“It feels like the city is kind of at this tipping point,” said Candace Woods, a queer minister and chaplain who has called Colorado Springs home for 18 years. “It feels interesting and strange, like there’s this tension: How are we going to decide how we want to move forward as a community?”

Five people were killed in the attack last weekend. Several people were hospitalized with injuries.

In recent decades the population has almost doubled to 480,000 people. More than one-third of residents are nonwhite — twice as many as in 1980. The median age is 35.

Politics here lean more conservative than in comparable-size cities. But city council debates revolve around issues familiar throughout the Mountain West, such as water, housing and the threat of wildfires.

Residents take pride in describing Colorado Springs as a place defined by reinvention. In the early 20th century, newcomers sought to establish a resort town in the shadow of Pikes Peak. In the 1940s, military bases arrived. In the 1990s it became known as a home base for evangelical nonprofits and Christian ministries including broadcast ministry Focus on the Family and the Fellowship of Christian Cowboys.

The idea of latching onto a city with a bright future is partly what drew Michael Anderson, a Club Q bartender who survived the shooting.

Two friends, Derrick Rump and Daniel Aston, helped Anderson land the Club Q job and find his “queer family” in his new hometown. It was more welcoming than rural Florida where he grew up.

Still, he noted signs the city was more culturally conservative than others of similar size and much of Colorado: “Colorado Springs is kind of an outlier,” he said. Now he’s grieving the deaths of Rump and Aston in the club shooting.

Leslie Herod followed an opposite trajectory. After growing up in Colorado Springs in a military family — like many others in the city — she left to study at the University of Colorado in liberal Boulder. In 2016 she became the first openly LGBTQ and Black person elected to Colorado’s General Assembly, representing part of Denver. She is now running to become Denver’s mayor.

She said she found community at Club Q when she would return from college. But she didn’t forget people and groups with a history of anti-LGBTQ stances and rhetoric maintained influence in city politics.

“This community, just like any other community in the country, is complex,” she said.

Club Q’s co-owner, Nic Grzecka, told The Associated Press he’s hoping to use the tragedy to rebuild a “loving culture” in the city. Even though general acceptance the LGBTQ community has grown, Grzecka said false assertions that members of the community are “grooming” children has incited hatred.

Grzecka said he believes the shooting targeted a drag queen event because the art form is being cast in a false light in recent months by right-wing activists and politicians who complain about the “sexualization” or “grooming” of children.

Even though general acceptance of the LGBTQ community has grown, this new dynamic has fostered a dangerous climate, he said.

“It’s different to walk down the street holding my boyfriend’s hand and getting spit at (as opposed to) a politician relating a drag queen to a groomer of their children,” Grzecka said. “I would rather be spit on in the street than the hate get as bad as where we are today.”

Earlier this year, Florida’s Republican-dominated legislature passed a bill barring teachers from discussing gender identity or sexual orientation with younger students. A month later, references to “pedophiles” and “grooming” in relation to LGBTQ people rose 400 percent, according to a Human Rights Campaign report.

“Lying about our community, and making them into something they are not, creates a different type of hate,” Grzecka said.

Those who have been around Colorado Springs long enough are remembering how, in the 1990s, at the height of the religious right’s influence, the Colorado Springs-based group Colorado for Family Values spearheaded a statewide push to pass Amendment 2 and make it illegal for communities to pass ordinances protecting LGBTQ people from discrimination.

The influx of evangelical groups decades ago was at least in part spurred by efforts from the city’s economic development arm to offer financial incentives to lure nonprofits. Newcomers began lobbying for policies like getting rid of school Halloween celebrations due to suspicions about the holiday’s pagan origins.

Yemi Mobolade, an entrepreneur running for mayor as an independent, didn’t understand how strong Colorado Springs’ stigma as a “hate city” was until he moved here 12 years ago. But since then, he said, it has risen from recession-era struggles and become culturally and economically vibrant for all kinds of people.

There has been a concerted push to shed the city’s reputation as “Jesus Springs” and remake it yet again, highlighting its elite Olympic Training Center and branding itself as Olympic City USA.

Much like in the 1990s, Focus on the Family and New Life Church remain prominent in town. After the shooting,

Focus on the Family’s president, Jim Daly, said that like the rest of the community he was mourning the tragedy. With the city under the national spotlight, he said the organization wanted to make it clear it stands against hate.

Daly noted a generational shift among Christian leaders away from the rhetorical style of his predecessor, Dr. James Dobson. Whereas Focus on the Family published literature in decades past assailing what it called the “Homosexual Agenda,” its messaging now emphasizes tolerance, ensuring those who believe marriage should be between one man and one woman have the right to act accordingly.

“I think in a pluralistic culture now, the idea is: How do we all live without treading on each other?” Daly said.

After a sign in front of the group’s headquarters was vandalized with graffiti reading “their blood is on your hands” and “five lives taken,” Daly said in a statement Nov. 25 it was time for “prayer, grieving and healing, not vandalism and the spreading of hate.”

The memorials this week attracted a wave of visitors: crowds of mourners clutching flowers, throngs of television crews and a church group whose volunteers set up a tent and passed out cookies, coffee and water.

To some in the LGBTQ community, the scene was less about solidarity and more a cause for consternation.

Colorado Springs native Ashlyn May, who grew up in a Christian church but left when it didn’t accept her queer identity, said one woman from the group in the tent asked if she could pray for her and a friend who accompanied her to the memorial.

May said yes because it reminded her of her beloved great-grandparents, who were religious. But as the praying carried on, and the woman urged May and her friend to turn to God, May said she felt as if praying had turned into preying. It unearthed memories of hearing things about LGBTQ people she saw as hateful and inciting.

“It felt very conflicting,” May said.