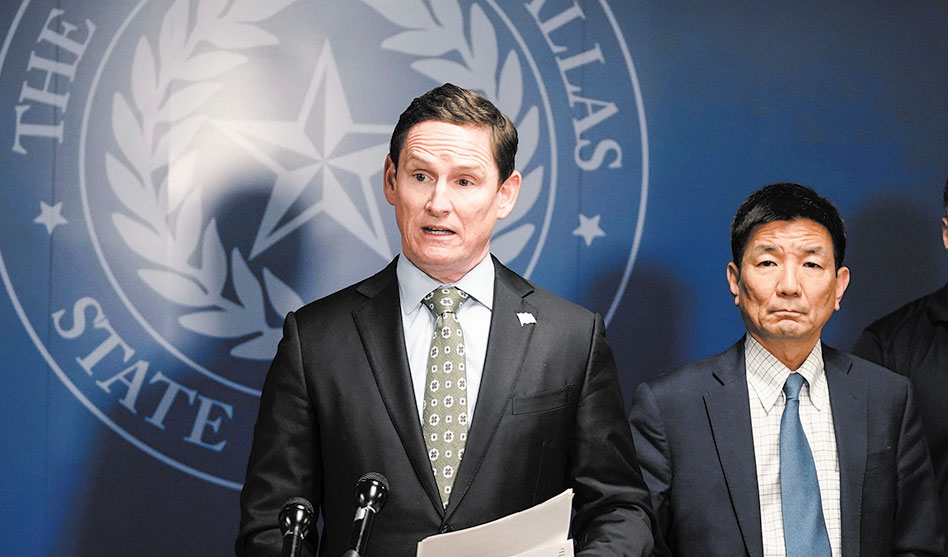 Dallas County Judge Clay Jenkins announces that the county has declared a local state of disaster for public health emergency in the county, due to more cases of the new coronavirus, on March 12. At right is Dr. Philip Huang, director of Dallas County Health and Human Services. (Smiley N. Pool/The Dallas Morning News via AP)

What a year. We have seen pandemics before; we have seen social upheaval, and we have seen contentious elections. But all at once? Not in recent memory.

week, as we kick off what we all most sincerely hope will be a much better new year, David Taffet will recap our top local news stories.

COVID-19
Since the beginning of 2020, the world has struggled in the grip of a deadly pandemic that has claimed more than 1.6 million people worldwide — 306,000 in the U.S. alone — and counting. And still, even as the daily death toll in the U.S has topped 3,000, there are those who insist that COVID-19 is a hoax, “fake news” generated by liberals to undermine Donald Trump’s already flailing presidency.

The first hint that the world was about to change came on Dec. 11, 2019, when the government in Wuhan, China, announced that health authorities there were treating dozens of cases of a new viral disease. Just days later Chinese scientists identified a new form of coronavirus, which would eventually become known as SARS CoV-2, cause of COVID-19.

From the beginning, U.S. President Donald Trump downplayed COVID-19, refusing to listen to his own scientists and health experts, refusing to take any decisive action action until it was too late, and refusing to encourage his supporters to follow the CDC’s best practices. In fact, in January Trump told CNBC, “We have it totally under control.” We didn’t have it under control.

In mid-March Trump finally officially declared a national emergency and allocated $50 billion in federal funds to states to fight the viral epidemic. The CDC advised against gatherings of 50 or more, and Trump told everyone to avoid gatherings of more than 10. New York City’s public school system — the largest in the country — shut down.
Here in North Texas, officials in Dallas County and Tarrant County began to respond in earnest.

At that point, there were 49 known cases in Texas. That number would soon begin to increase rapidly.
Silver Pride was one of the first organizations locally to start cancelling events. Officials with Texas Bear Roundup announced March 13 that the 2020 event — which had started that day — was being cancelled.
County and city officials in North Texas had already ordered bars, salons, gyms and theater venues and other non-essential businesses to close and for restaurants to suspend in-person dining, but Abbott waited until March 19 to issue an executive order making those restrictions statewide.

The shutdown hit the LGBTQ community hard, because many LGBTQ people depend on the service industry for their livelihoods. With the bars and restaurants salons closed down, all the bartenders, wait staff, drag entertainers, hair stylists and more suddenly found themselves jobless.

The order included hair salons, something that set up a confrontation between Texas’ top Republican officials — Abbott, Lt. Gov. Dan Patrick and Attorney General Ken Paxton — and the Democrats in Dallas’ county and city governments after Dallas salon owner Shelley Luther defiantly declared her salon would open anyway because she needed to pay her employees and feed her children.

Luther was cited in late April for violating state and county orders, and then, when Judge Eric Moye gave her the chance to avoid prosecution by simply apologizing, she refused and was sentenced to seven days in jail for contempt of court.

Paxton sent a letter chastising Moye, and gay Dallas City Councilman Omar Narvaez called Paxton out for violating the Texas Code of Judicial Conduct and for interfering in a case involving a white woman while two Hispanic women had been jailed in Laredo for the same offense without any outrage or outcry from the Republicans in Austin.

In the meantime, the number of confirmed cases of COVID-19 and the number of deaths attributed to the disease continued to climb. Schools and businesses around the country closed for the long haul while Congress passed a stimulus package many felt didn’t go far enough. Back in the North Texas LGBTQ community, more events were being cancelled. The city of Dallas closed its parks for the Easter weekend. Dallas Pride Executive Director Jaron Turnbow announced that the Dallas Pride festival and parade were being postponed until late July; the parade and festival were later cancelled and replaced with a virtual party.

By the week of Thanksgiving, COVID fatigue had set in in earnest. Despite warnings from health experts practically begging people to stay home and avoid large gatherings, people traveled; families gathered for the holiday. And the numbers of new infections and new deaths soared. In Dallas County, as the number of hospital beds occupied by COVID-19 patients topped 15 percent for the seventh day in a row, Jenkins once again ordered bars and restaurants to close.

As the year finally comes to a close, there is a glimmer of hope of the horizon. The Pfizer coronavirus vaccine was granted emergency use authorization by regulators in the U.S., and the first U.K. citizen was vaccinated on Dec. 8. The U.S. Food and Drug Administration issued the first emergency use authorization for the Pfizer vaccine in the U.S. on Dec. 11, and a second vaccine, from Moderna, was — at the time of this writing — expected to gain FDA approval by the end of the week.

there is more darkness ahead before the vaccines bring a new dawn. Experts are warning of another surge to come over the Christmas/New Year’s holidays, and as of Dec. 16, there have been more than 17.1 million cases and more than 310,000 deaths.