2020: Local stories that had us talking • Rainbow crosswalks 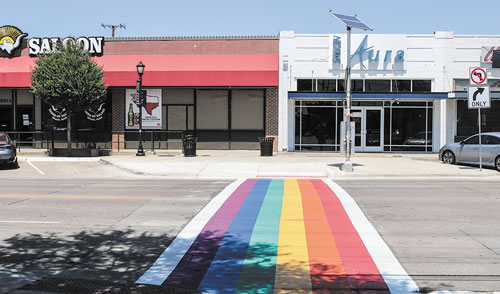 One of 10 rainbow crosswalks on Cedar Springs Road.

When it was first suggested, the city said no to all crosswalks that weren’t plain white. Then in 2017, a decorative crosswalk was installed on the corner of Lemmon Avenue East and McKinney Avenue adjacent to West Village in the Uptown neighborhood of Oak Lawn. Bond money had been set aside to do some upgrades to Cedar Springs Road, but the bond money couldn’t be used for crosswalks because bond money may only be spent on things that are expected to last 20 years or more, and crosswalks have a much shorter lifespan. So money was raised privately to pay for the rainbow crosswalks.

In February this year, the LGBT Chamber of Commerce presented the city of Dallas with a ceremonial check of $128,250 in the Flag Room at Dallas City Hall to pay for the rainbow crosswalks. The chamber will maintain a balance to pay for any future maintenance work needed on the crosswalks.

Construction along Cedar Springs in 2020 included new landscaping, new sidewalks, new traffic lights and more began earlier this year. Most of the work has been completed and the rainbow crosswalks were installed as sections of the street were completed. Two gateway markers were installed as well. The first stands on the corner of Douglas and Cedar Springs roads on the corner of Kroger’s property. The letters O-A-K-L-A-W-N stand on risers, each a different color of the rainbow, with black and brown added to make eight pillars — one holding each letter and one for a space between OAK and LAWN. The second stands on Oak Lawn Avenue in the center median between The Centrum and Walgreens near the Legacy of Love monument. That marker has 15 pillars that light up at night and Oak Lawn can be read from either side of the street. The markers were part of the bond money allocated to entertainment district upgrades.