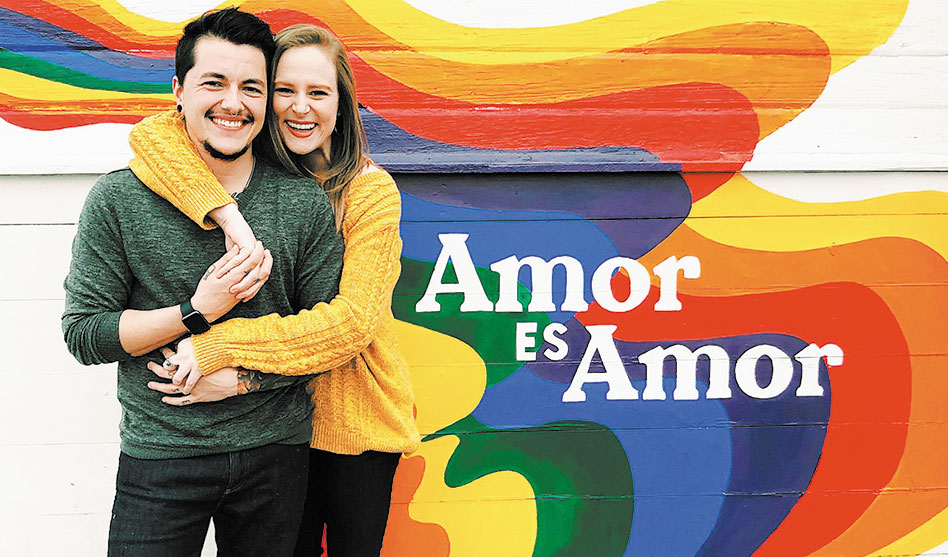 Some people swear by online dating options, others insist they will only meet in person. But two social media influencers found a way to unite those worlds.

About a year ago, Shelby Sorrel, a straight cis woman who works as a social media strategist and is an avid food Instagrammer, attended a brunch in a restaurant inside the W Hotel in Austin. The meet-up was at the invitation of Bumble, the dating app famed for requiring the woman to make the first move. On the menu: Pride foods such as rainbow pancakes.

Attending the same event was Chris Rhodes, a transman, who showed up with his twin sister and her girlfriend to celebrate Pride. Until then, each was unaware the other would be there, though they followed each others’ social media posts.

Sorrel and Rhodes sat with other attendees at three long tables inside W Austin’s posh restaurant, sitting close enough to mingle. And something special happened. Instead of using digital clicks to spark interest in another, they clicked … face to face.

“It was funny, because I’ve been on dating apps for like seven years,” Sorrel says. “And I had miscellaneous, random relationships through them, but never anything that was lasting. And so it was funny to actually meet someone in real life at a Bumble event and have that work better than any of the other times before.”
Rhodes felt a bit shy, so Sorrel made the first move.

“I kind of counted myself out early on,” Rhodes says. “I think that to her, she was very confused when I wasn’t really making moves, and I was just kind of timid at the beginning.”

Soon after the event, the two started a back-and-forth through Instagram messages. After a couple of months chatting online, Sorrel asked Rhodes to meet up for drinks. And after hanging out in the real world, their connection grew stronger. By January 2019, they each officially changed their single status on Facebook to “in a relationship.”

Before they met, Rhodes had always dated queer women; he’s the first trans individual Shelby ever dated. But despite dating someone different than before, their affection for one another felt right.

“For me, some people don’t understand how I identify as straight but am dating a transman,” Sorrel says. “I think a lot of people like to focus on genitals that people do or don’t have or misunderstand what it looks like to date a transgender male, and I think that a lot of people are stuck in their own ways of thinking that makes somebody identify differently than they actually do.”

When they first started dating, Sorrel and Rhodes discussed how different a trans relationship might be. They say communication helped them navigate through unfamiliarity and uncertainty to come.

Sorrel, who comes from a conservative household, worried a little what her family and friends might think of her relationship with Rhodes. But her friends and family were pleased to see her happy.

And since they discovered a new type of courtship, each say they’ve melded more into the other’s community and learned love can wire any two together when a mutual respect is met.

“My advice is to be confident and read the person that you’re interacting with,” Rhodes says. “Don’t just necessarily make assumptions about their attraction or their openness to dating someone that might not be their usual type. I mean, I think that really applies to any person you might date, whether you’re in a queer relationship, or trans or just stepping out of your comfort zone in general while dating.”