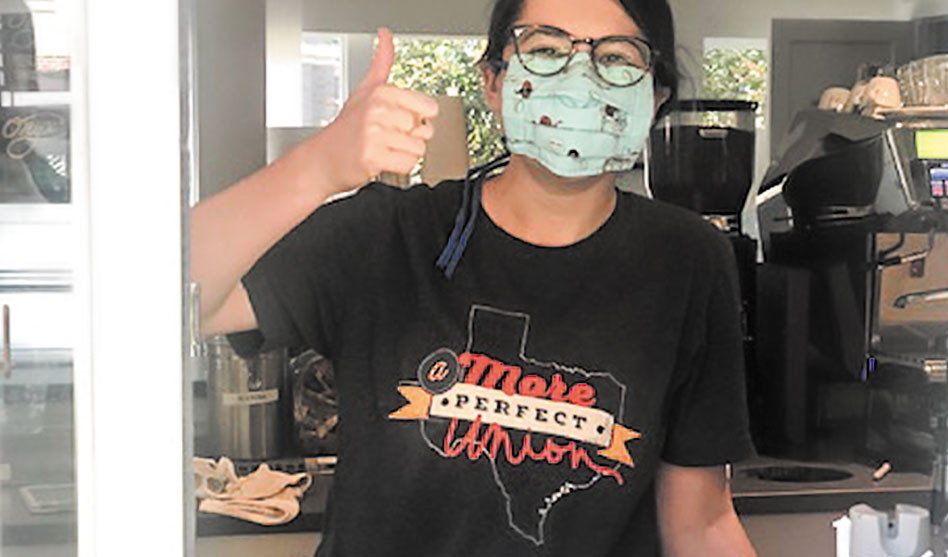 Like other coffee shop and restaurant owners, Union Coffee’s Mike Baughman is figuring out how to keep his staff employed while also keeping them safe. Unlike other places, he’s done this while battling the coronavirus himself.

Before anyone is scared off by the news that he has COVID-19, it’s important to note that Baughman has been working from home for more than a month, and he didn’t infect anyone on his staff or in his family.

His wife, Oak Lawn United Methodist Church’s senior pastor, the Rev. Rachel Baughman, took care of him while sleeping in another room, he explained. And he spent some time with each of their four children while keeping a 12-foot distance from them.

“Somehow, with lots of hand washing and disinfecting,” he said, no one else in his family got sick.

When stores, bars, restaurants and many other businesses closed, Baughman knew he’d have to get creative to keep everyone at Union Coffee employed. So far, all of his baristas are working a full schedule. Step one was keeping the walk-up window open.

Next he had to keep them and their customers safe. That involved creating no-contact service. Union Coffee had plenty of gloves on hand without hoarding. Baughman said he only orders gloves a couple of times a year and last took delivery in February.

Then Baughman had to figure out how to ensure safe payments. Now, customers use the credit card pad, and the staff wipes it down after each use. And with the walk-up window, no one is entering the coffee shop, so there’s plenty of room for distancing on line as well as distancing staff. 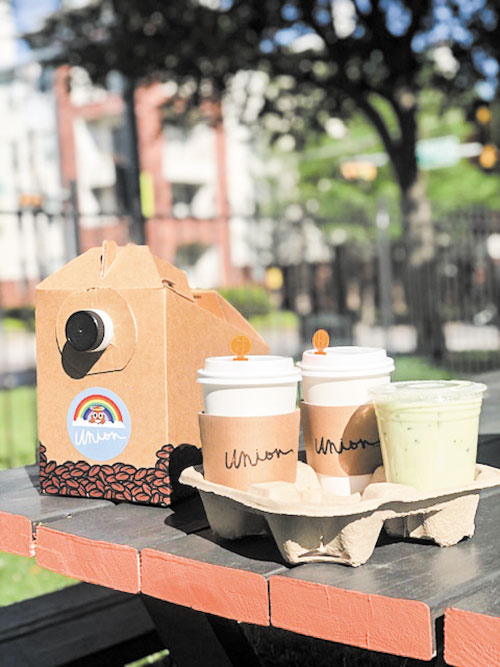 Baughman also had to figure out how to make up for some of the hit the shop was taking with no sit down service available.

The United Methodist Church launched Union Coffee as a laboratory to engage with the neighborhood and with people who have left the church and then find alternative ways to sustain good work. So Baughman came up with the idea to “Send coffee to Dallas heroes.”

His idea was to give people a way to say thank you to those working in non-profits with budgets stretched thin and volunteers becoming scarce.

For a discounted price, Union Coffee will deliver a gallon of coffee, tea or matcha to the staff at homeless shelters or at Cafe Momentum. This week they added the COVID-19 tactical team at Parkland Hospital to the list.

Baughman said he knew he would get a good response. He got the idea from something that happened several years ago: Soon after Trump came into office, he stopped immigration from a number of countries. Demonstrators supporting those coming into the country crowded DFW Airport, and Union Coffee sent gallons of their brew to attorneys who were working at the airport pro bono on the immigration cases.

At the airport, there was no shortage of volunteers, just people working long hours trying to help. But this time is different at a number of essential non-profits.

“They’re working a lot harder and functioning with fewer volunteers,” he said. “They’re struggling with funding and feeling isolated and lonely. Any measure of thank you matters a great deal.”

Union Coffee is also connecting people who are stuck at home with organizations that need volunteers. The Vogel Alcove, a non-profit daycare center that cares for children of the homeless, is short on volunteers so is asking people to engage by reading a story online, Baughman explained.

They’re also short on supplies, so on Saturday, April 18, Vogel Alcove is holding a supply drive in the Union Coffee/Oak Lawn United Methodist parking lot. They need diapers, wipes, toilet paper, detergent, soap and more. Anyone who donates gets a 25 percent discount at the coffee shop.

As Baughman is recovering from his own bout with COVID-19, he’s more concerned with helping others through this difficult time. But he called his fight with the virus “a pretty nasty week and a half.”

He wasn’t hospitalized. But once he recognized the symptoms — feeling achy with a severe headache and having difficulty breathing — he had a doctor’s appointment via Skype. His doctor sent him for a coronavirus test. By the time the result came back as positive a week later, “It was mostly over,” Baughman said. But “It’s not hard to see how people end up on a respirator. It was worse than the asthma I grew up with.”

Fatigue, he said, is a lingering symptom.

Baughman isn’t sure how he contracted the virus. Since no one in his family is positive, and no one else at Union Coffee is showing any symptoms. His only other contacts in the last month were at the supermarket.

He said his case, which didn’t require hospitalization, isn’t something anyone wants to endure. “It shows the importance of staying home,” he said. “Had I gone in the days before showing any symptoms, I would have spread it to the whole staff. I could have done a lot of harm.”

Instead, he and Union Coffee are doing a lot of good.