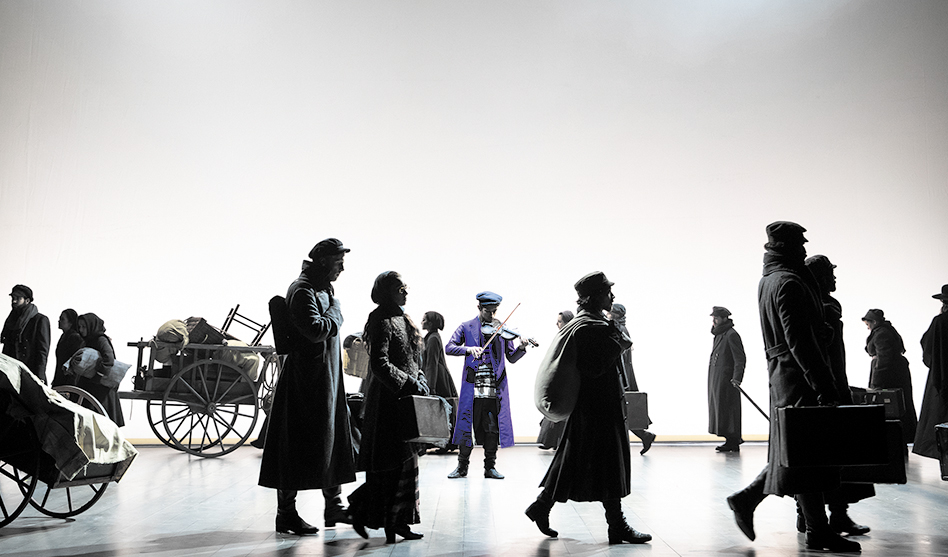 Set in a very ugly Anatevka, this fiddler is off the roof and in the middle of the stage.

If you’ve been to a wedding anytime in the last 50 years, you know the music. If you’re from a Jewish family, you know the story — because Fiddler On The Roof is the story of your family.

Tevye the milkman heads a poor family in the Russian town of Anatevka in 1905. The world is changing, and Tevye has to deal with that in his own family.

Fiddler is the story of dealing with change in the early 20th century, as seen through the marriages of Tevye’s three daughters. The first, Tzeitel, rebels against her arranged marriage. She wants to marry Motel the tailor. Tevye gives in.

Hodel, the second daughter, tells Tevye that she’s going to marry Perchik the student, the revolutionary. Tevye refuses, but she explains she’s not asking for his permission, only his blessing. Tevye resolves that conflict by giving her his permission and his blessing.

And Chava, his third daughter, marries Fyedka who isn’t Jewish. Tevye never fully resolves that conflict, but hugs her at the end.

Yehezkel Lazarov, an Israeli actor, is wonderful as Tevye in the touring production currently playing at the Music Hall at Fair Park. The daughters, their husbands – all very well played. The ensemble singing and dancing — as good as any production I’ve seen.

But as I sat down to enjoy the performance, I kept telling myself not to compare. I saw the original on Broadway with Herschel Bernardi. In fact, Fiddler was one of the first shows I ever saw. More recently, I saw the definitive tour with Topol, who starred in the 1971 film version and has played Tevye on stage in more performances than anyone else.

Lazarov channels Zero Mostel, the original Tevye, well. His wife, Golde, played by Maite Uzel — well, not so much. Golde is the long-suffering yet loving mother. In the second act, when Tevye sings to her, “Do you love me?” and she answers, “Do I what?” we know it’s a question she’s never considered before. But after answering that for 25 years she’s lived with him, fought with him, starved with him, shared her bed with him, she sings, “If that’s not love, what is?”
In other productions, we believe her.

But this Golde is simply farbissina, a Yiddish word meaning “embittered and angry.” When Tevye sings, “Then you love me?” her response, “I suppose I do,” is forced. It’s condescending, as if she’s really thinking, “I could have done better.”

And maybe that’s an honest response. And maybe this is just a different interpretation of Fiddler that audiences who love the show should be prepared for from the beginning.

As the curtain rose, I was shocked. Rather than the luscious Chagall-inspired set of a storybook Anatevka, the stage is bare. OK, so maybe this is a bare-bones production without sets — no fiddler on the roof, just a fiddler across the stage.

No, the sets begin in scene two. In this Fiddler, Anatevka is a very ugly place. Tevye’s house is a dark hovel where seven people somehow manage to live. When the tsar orders the pogrom that scatters the residents of Anatevka to everywhere from Siberia to Warsaw to Chicago, again the stage is bare. Their lives are empty and ready to start anew.

In this Fiddler, I almost cheered for the tsar. To hell with tradition. Far from the home I love? Glad I made it to Texas. It’s even farther than New York, where my family landed. Thank you for kicking us out and getting us to America.
Tevye isn’t leaving the town from a fairy tale. The Anatevka presented here is dark and dirty and ugly and loathsome.

In the current anti-immigrant environment, this Fiddler does succeed in telling the story of people forced to flee their homes.

Clearly, no one wants to leave Anatevka. When the constable delivers the order that everyone has three days to flee, one villager suggests they stay and fight. In this case it would be fighting the well-armed tsar’s army. In today’s world it would be fighting drug lords and well-financed gangs.

Fiddler on the Roof plays at the Music Hall at Fair Park through Aug. 18 and at Bass Hall from Aug. 20-25.Tickets and more info at FiddlerMusical.com.