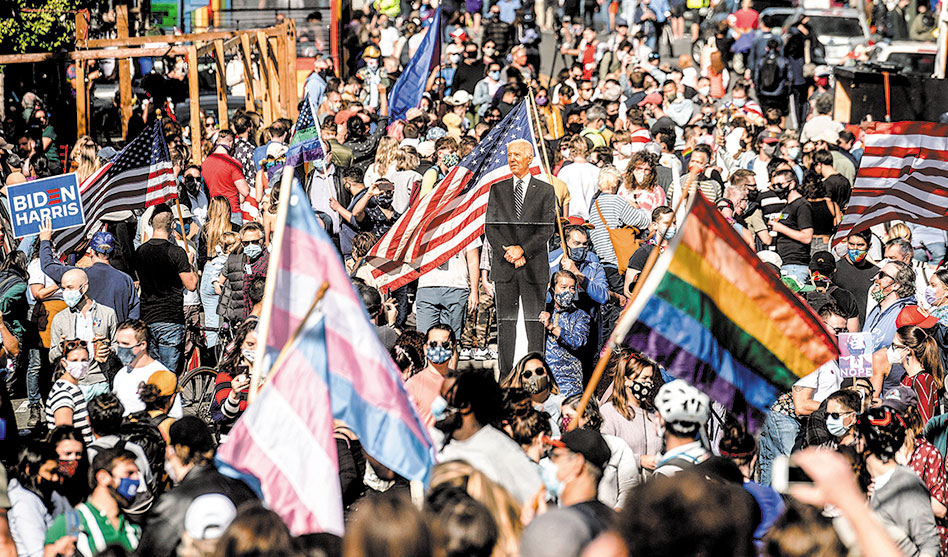 Even though Democrat Joe Biden has already secured more than enough electoral college votes and has been declared the president-elect, Donald Trump has refused to concede the election. He continues with a steady stream of tweets declaring he won the election by a big margin and that in swing states that went for Biden — like Wisconsin, Michigan, Nevada, Pennsylvania and, so far, Arizona and Georgia — by narrow margins, there was rampant voter fraud that allowed Biden to prevail.

Despite his claims and his promise of legal challenges and recounts everywhere, though, neither the Trump campaign nor his followers have managed to present any actual evidence to back up their claims of fraud.

Heavily LGBTQ precincts in the Castro neighborhood of San Francisco and in the popular LGBTQ vacation town of Provincetown in Massachusetts showed 91 percent or more of voters supported the Democratic ticket of Biden and Sen. Kamala Harris. Support for Trump in those locations ran between 2 and 8 percent.

In the heavily LGBTQ town of Wilton Manor, Fla., support for Biden ran between 79 and 82 percent; Trump support there fell between 17 and 19 percent.

In five heavily LGBTQ neighborhoods in Philadelphia — the state where Biden came from behind to win the state and secure its 20 electoral college votes, which put him over the 270 necessary to win — Biden won between 84 and 92 percent of the vote.

But exit poll data from the National Election Pool, used by the New York Times and the major television networks, seemed to tell a different story. That data indicated that, among about 1,100 voters who self-identified as LGBT, only 61 percent supported Biden, while 28 percent supported Trump.

But these two sets of data were collected in very different ways, and both could be showing a fair picture of the LGBTQ vote.
The exit poll data has the benefit of collecting information from a wide sample of LGBTQ people, not just those who live in heavily LGBTQ neighborhoods. It may suffer from the reluctance of LGBTQ voters to share personal information with a stranger who approaches them outside a voting place in their neighborhood, which may not be heavily LGBTQ or even LGBTQ-friendly.

Alphonso David, president of the Human Rights Campaign which endorsed the Biden/Harris team and worked for their victory, praised the outcome Saturday morning, Nov. 7, saying, “The future of our democracy and the quest for equality is bright.”

He continued, “Trump, Pence and anti-equality forces left us with unlawful and regressive policies that have stripped away protections marginalized communities have had for years.”

While acknowledging there will be much hard work ahead, David said Biden and Harris are “not just willing to be our allies, but they are true advocates for equality.”