Shakin’ it for Pride Month 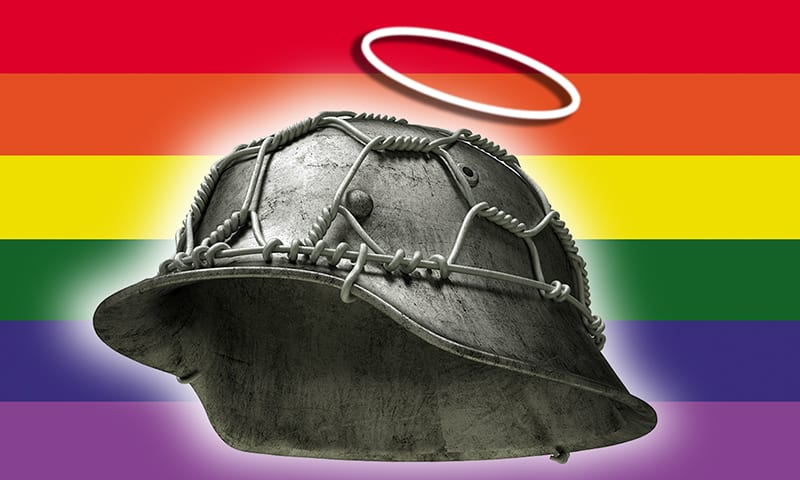 Gays and rainbow flags are offensive, but Nazis are OK?

June is Pride Month. And that means anti-LGBTQ folks are losing their goddamn minds.

I attended Motor City Pride in Detroit recently with my wife, our son and my wife’s 69-year-old aunt. It was a family affair.

Oh, and there were Nazis, too, complete with swastikas and guns, because open carry is legal in Michigan. Yes, that’s right. In Michigan, an LGBTQ person has no right to be free from discrimination, but a Nazi has a right to carry guns out in the open. As a state, our priorities are pretty fucked up.

Thankfully, my family didn’t encounter the Nazis. We were too busy at the kids’ tent learning about fossils from a man in a lab coat named Dr. Dinosaur.

My son got to hold fossilized dinosaur poop. Definitely the highlight for him.

The Detroit Police Department got a lot of criticism for “escorting” the Nazis, though in their defense their goal was to keep the Nazis and the Pride celebrants separate to prevent violence, which they achieved. Ideally, the police would have told the Nazis to GTFO, but that’s not their job because of freedom of speech.

Though I’d like to point out, that marching with guns and screaming that LGBTQ people should die is not free speech, it’s an incitement to violence, which is not protected by the first amendment and should not be protected by the police or any other governmental entity. But that’s not where we are as a society yet.

The Nazis reportedly destroyed a rainbow flag while trying to disrupt Motor City Pride. Thankfully, there were more flags where that one came from.
Also thankfully, the Trump Administration is protecting embassies worldwide from Nazis … . Wait, no, I’m sorry. That’s my mistake. Let’s try this again:

The Trump administration is protecting embassies worldwide from rainbow flags.

Under President Obama, U.S. embassies were allowed to officially raise a rainbow flag during June. Under Trump they are not. Rainbow flags aren’t banned from embassy premises, but they are conspicuously absent from the official flag pole.

And that absence is definitely intended to send a message. And anti-LGBTQ Trump supporters and self-proclaimed Christians are getting that message loud and clear.

Franklin Graham thanked Trump and Secretary of State Mike Pompeo “for making the decision not to fly the gay flag over our embassies during June in recognition of gay Pride month. That is the right decision. The only flag that should fly over our embassies is the flag of the United States of America.

The gay Pride flag is offensive to Christians and millions of people of other faiths, not only in this country but around the world. The U.S. flag represents our nation — everyone — regardless of race, religion or sexual orientation.”

The rainbow flag isn’t offensive to Christians, but it is offensive for people to use their religion as a weapon against people they don’t like. So, I can see that while Graham would be offended, many LGBTQ and allied people of faith are not offended by a rainbow flag. They are offended by bigotry though.

He continued, “The rainbow was given to us by God as a sign that he would not destroy the earth by water again, and you’re going to appropriate that as pride in homosexuality? Are you kidding me? Talk about blasphemy. Talk about arrogance. Talk about boldness. Talk about shaking your fist in God’s face.”

If the music at Pride festivals around the world is any indication, there’s a lot more shaking than fists. But I get Jackson’s point. Then again, it’s nice to see that he’s so worried about floods. I’m sure his sermons on global warming are lit.

If only the Christian right got as worked up over Nazis as they do over LGBTQ people. Imagine a world where Graham said, “Nazis are offensive to Christians and millions of people of other faiths,” or where E.W. Jackson said, “Talk about shaking your fist in God’s face,” and he was talking about hateful Nazis, not about peaceful LGBTQ people.

Until then, we’ll keep shaking our fists — and our asses — and refusing to apologize for who we are.