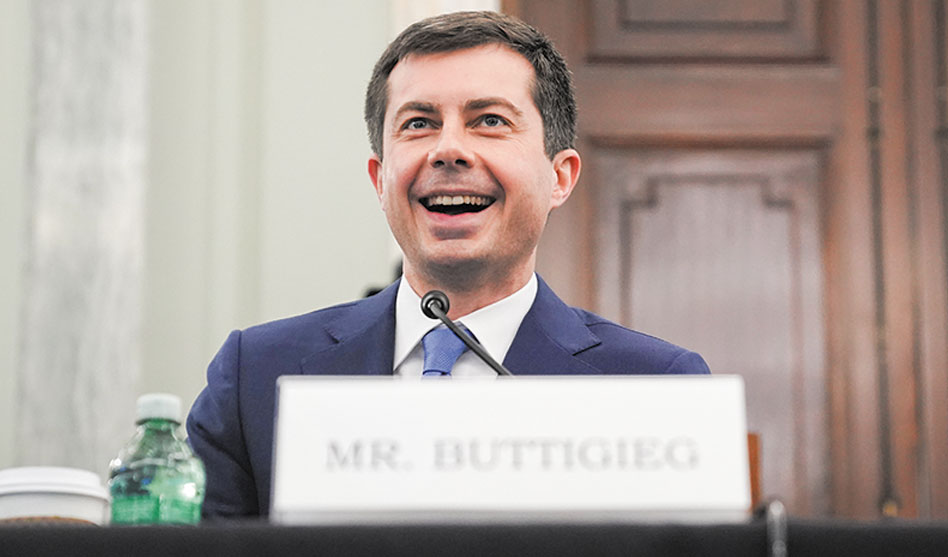 Pete Buttigieg was approved by the U.S. Senate on Tuesday, Feb. 2, as Secretary of Transportation, marking the first time an openly gay person has been confirmed to a Cabinet-level position — a long overdue achievement for the LGBTQ community.
The former South Bend mayor, nominated by President Biden after making history in the 2020 Democratic primary as an openly gay candidate, was confirmed on a bipartisan vote of 86-13.

The Democratic caucus was united in support for Buttigieg. Among the Republicans joining them were Texas Sen. John Cornyn as well as Joni Ernst of Iowa, Roger Wicker of Mississippi, John Kennedy of Louisiana and Rob Portman of Ohio.

Texas’ senator, Ted Cruz, was among the 13 Republicans who voted against Buttigieg’s confirmation. The others were Tom Cotton of Arkansas, Roger Marshall of Kansas, Rick Scott of Florida, Tommy Tuberville Alabama, Richard Shelby of Alabama, Josh Hawley of Missouri, Marsha Blackburn of Tennessee, Marco Rubio of Florida, Tim Scott of South Carolina, James Lankford of Oklahoma, Bill Hagerty of Tennessee and Bill Cassidy of Louisiana.

Many of the 13 — including Cruz — are considered likely 2024 Republican presidential contenders. Cruz, Hawley, Tuberville and Marshall were among those who objected to certifying the electoral college ballots, supporting Trump’s lies that the 2020 election was “stolen” from him.

Headed to D.C.
With Tuesday’s vote, Buttigieg and his spouse, Chasten Buttigieg, will leave their lives in the Midwest to become Washington insiders in a script that could be a play on American filmography, “Mr. Buttigieg Goes to Washington.”

Senate Majority Leader Charles Schumer, D-N.Y., said on the Senate floor prior to the confirmation vote that Buttigieg is an “outstanding nominee” who has “demonstrated an impressive familiarity with our nation’s entire transportation challenges,” including the proposed gateway tunnel from New Jersey to New York City.

“I know that Mr. Buttigieg is committed to working with members from both sides to improve rail and transit, highways and more in rural communities, urban centers and everywhere in between,” Schumer said. “I’m excited to call him ‘Secretary Pete’ by the end of the day.”

The bipartisan vote reflects the confirmation hearing for Buttigieg, when he enjoyed a relatively breezy reception by lawmakers from both parties on the Senate Committee on Commerce, Science & Transportation, with the exception of hostile questions from Cruz.

Buttigieg, during his testimony before the committee, said renewing America’s infrastructure would be key to his approach as transportation secretary. Buttigieg also said any renewal of the transportation system would be sensitive to racial equity, which is consistent with President Biden’s campaign pledge to tackle systemic racism.

Annise Parker, CEO of the LGBTQ Victory Institute, said in a statement that Buttigieg “shattered a centuries-old political barrier” by winning Senate confirmation to a Cabinet-level role as an openly gay person and doing so with bipartisan support.

“While his confirmation is historic, Pete is focused on the difficult task ahead,” Parker said. “America is in desperate need of a revitalized transportation effort and his two terms as mayor provide the experience and perspective needed to propose bold solutions.

“America is fortunate to have Pete as their secretary of transportation.”

Buttigieg won the historic designation amid a dispute over whether or not he should be considered the first openly gay person to serve in a Cabinet role considering Richard Grenell did serve as acting director of national intelligence, a Cabinet-level role, under Trump. Grenell, however, never sought nor won Senate confirmation for the position, although he was confirmed for his concurrent position as U.S. ambassador to Germany.

James Hormel, who became the first openly gay ambassador in U.S. history in 1999 after former President Clinton designated him in a recess appointment as U.S. ambassador to Luxembourg, said Buttigieg can rightfully claim the title of first openly gay Cabinet official because of the “acting” nature of Grenell’s role, although the Trump White House had insisted the distinction belongs to Grenell.

Undisputedly, however, Buttigieg is the first openly gay person to win Senate confirmation specifically for a Cabinet-level position.

To be sure, other openly gay people have won Senate confirmation, just not for Cabinet-level roles. The first was Roberta Achtenberg, who was confirmed in 1993 as assistant secretary for the Department of Housing & Urban Development. The long list includes presidential appointees, ambassadors and judicial nominations, many of them for senior positions just shy of Cabinet-level roles.

Among them is Fred Hochberg, who served during the Obama years as head of the Export-Import Bank; Eric Fanning, confirmed as Secretary of the Army after a long battle in the Senate in 2016; and Patrick Bumatay, appointed by Trump to the U.S. Ninth Circuit Court of Appeals and now the highest-ranking out federal judge.

In many ways, Buttigieg’s confirmation as first openly gay person to a Cabinet-level position is a long overdue vote buttoning up the progress and historic confirmations the LGBTQ community has achieved in recent years.

Another Biden nominee, Rachel Levine, may soon achieve another first for the LGBTQ community if and when she is confirmed as assistant secretary of health and becomes the first openly transgender person to win Senate confirmation.

Praise for Buttigieg
Sen. Gary Peters, D-Mich., was among the senators who took to the Senate floor in support of Buttigieg, giving a shout-out to Chasten Buttigieg in the process: “As a Midwesterner, and as a husband to a Michigander who was born and raised in Traverse City, Secretary-designate Buttigieg fully recognizes the need to protect the Great Lakes,” Peters said. “I agree with Mayor Pete’s belief that he says, ‘Good transportation policy can play no less a role than making possible the American Dream.’”
Sen. Maria Cantwell, D-Wash., also praised Buttigieg on the Senate floor and said she “enthusiastically” supports Buttigieg because he’s up to facing the nation’s transportation challenges.

“I look forward to the type of focus that he can give to the Department of Transportation,” Cantwell added. “This area of our government, right now, needs to address the COVID crisis, it needs to help us plan for a better transportation system of the future and it needs to understand that this transportation infrastructure and investment in these changes in these sectors of cars and planes and passenger systems are all changing industries, and so our competitiveness will be at stake as well.”

Alphonso David, president of the Human Rights Campaign, congratulated Buttigieg for his “historic confirmation” in a statement.

“This confirmation breaks through a barrier that has existed for too long; where LGBTQ identity served as an impediment to nomination or confirmation at the highest level of government,” David said. “Let this important moment for our movement serve as a reminder to every LGBTQ young person: You, too, can serve your country in any capacity you earn the qualifications to hold.”

David also credited President Biden for achieving the historic first for the LGBTQ community, saying Buttigieg’s confirmation follows through on a commitment to diversity. “President Biden promised to deliver an administration representative of the diversity of this nation, and this confirmation is a significant achievement toward that goal,” David said.

Ruben Gonzales, executive director of LGBTQ Victory Institute, said in a statement Buttigieg’s confirmation is a “testament” to both Biden’s commitment to inclusivity and the American people’s “willingness to judge a leader by their qualifications, not their sexual orientation.”

Chris Johnson is chief political and White House reporter for the Washington Blade and a member of the White House Correspondents’ Association.