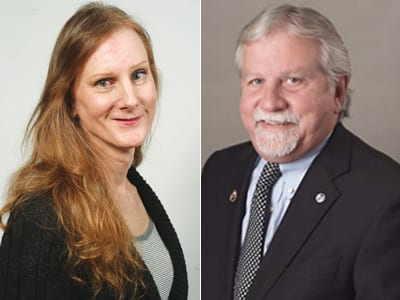 The agenda for the Rockwall City Council’s regular meeting tonight (Monday, May 2) includes an item to “Discuss and consider approval of an ordinance amending the Code of Ordinances in Chapter 22. Miscellaneous Offenses; Article I. In General by adding Section 22-5 to regulate public restroom/bathroom and changing facilities, and take any action necessary.”
The council is slated to hold a “first reading” of the proposed ordinance tonight. The second reading and final vote is scheduled for the May 16 meeting.
In other words, the city of Rockwall is considering enacting its own local version of the ridiculous “bathroom bills” that have become so popular with right-wing lawmakers at the state level.  The Rockwall version was drafted by Mayor Jim Pruitt and would, like all the others, ban transgender individuals from using appropriate public restroom facilities. It would make it a misdemeanor offense for a person to use multi-stall public restroom facility or locker room designated for a gender other than the one on their birth certificates.
Pruitt told WFAA Channel 8 news that he drew up the proposed ordinance in response to constituents’ concerns over policies at Planet Fitness and Target that all people to use appropriate restrooms — policies that, by the way, have been in place for a long time but that have been recently reiterated.
Pruitt said, “I just think that it’s insanity not to have those protections in place. These folks aren’t transgender that this is targeting. This is targeting folks of the opposite sex that are going into those restrooms under the guise of being transgender and having access.”
Pruitt, like all the other right-wingers promoting such legislation, failed to explain how he knows the difference between a transgender person and someone just dressing like someone of the opposite gender. Nor did he explain whether people who might have to use a public restroom will be required to present their birth certificate first, or who will be in charge of checking to make sure their gender matches their birth certificate.
Dallas Voice columnist Leslie McMurray, a transgender woman, will be on WFAA Channel 8 at 4:45 today to discuss the ordinance from the perspective of sanity and common sense. Someone said that Pam Curry spoke on the station’s noon newscast, but I haven’t found video of that yet.
Trans Pride Initiative spokeswoman Nell Gaither said in a written statement TPI has contacted the mayor and all the Rockwall City Council members “asking that they meet with us and reconsider this policy. Only one city council member responded, stating that he will not support the policy.”
Just an interesting side note: According to the city of Rockwall’s website, counting Mayor Pruitt, all seven members of the Rockwall City Council are white men.
A separate press release announced TPI’s plans to gather at the Rockwall City Hall, 385 S. Goliad, tonight before the meeting begins at 6 p.m.
Gaither noted that despite Pruitt’s insistence that the proposed ordinance isn’t directed at transgender people and “regardless of misdirection from the strategy books of the likes of Alliance Defending Freedom,” the intent of the ordinance is, without a doubt, “to discriminate against transgender and gender nonconforming person.
“More broadly, however, the intent is to increase administrative enforcement of stereotypical gender norms, particularly norms of femininity. Anyone — transgender or not — whose gender expression or presentation doesn’t align closely enough with various stereotypes of what a man or woman should look like will be subjected to the scrutiny of public gender defenders rushing to save innocent women and children from the hoards of men such legislation implies are just waiting for opportunities to parade in public as women and invade women’s spaces.”
Gaither points out that more than 200 domestic violence and sexual assault organizations recently signed a consensus statement opposing such laws and saying that, “we speak from experience and expertise when we state that these claims [that sexual predators dress as women to attack women in public restrooms] are false.”

What the EEOC has to say

In other — but related — news, the U.S. Equal Employment Opportunity Commission today released its “Fact Sheet: Bathroom Access Rights for Transgender Employees under Title VII of the Civil Rights Act of 1964.”
The fact sheet defines transgender, and then notes that in addition to other federal laws, the EEOC enforces Title VII of the Civil Rights Act of 1964, “which prohibits employment discrimination based on race, color, national origin, religion, and sex (including pregnancy, gender identity and sexual orientation.” Title VII “applies to all federal, state and local government agencies in their capacity as employers, and to all private employers with 15 or more employees.”
The statement notes that Macy v. Department of Justice has already set precedent with the EEOC ruling that discrimination based on transgender status is sex discrimination in violation of Title VII, and that G. ex rel. Grimm v. Gloucester City School Board has set precedent that contrary state law is not a defense for such discrimination.
“Gender-based stereotypes, perceptions or comfort level must not interfere with the ability of any employee to work free from discrimination, including harassment,” the statement noted, and “Title VII prohibits discrimination based on sex whether motivated by hostility, by a desire to protect people of a certain gender, by gender stereotypes or by the desire to accommodate other people’s prejudices or discomfort.”
The EEOC statement has says quite plainly that religious beliefs also cannot be used as a basis for such discrimination because “Like all non-discrimination provisions, these protections address conduct in the workplace, not personal beliefs. Thus, these protections do not required any employee to change beliefs.”
So in other words, if the city of Rockwall passes this asinine ordinance and tries to enforce it in the bathrooms at City Hall, they’ll be violating Title VII of the Civil Rights Act of 1964.
Anyone who feels they have been discriminated against can file a complaint under Title VII at the EEOC website or by calling 1-800-669-4000.