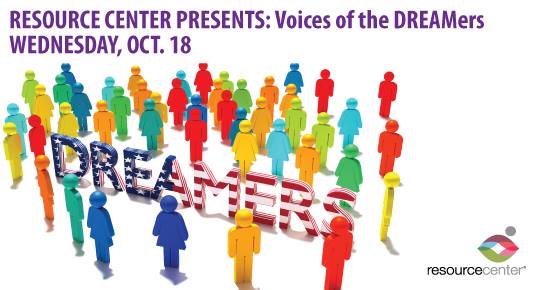 Hear stories from DREAMers who took advantage of the Deferred Action for Childhood Arrivals (DACA) program to attend school, get jobs and build a life in this country.
On Sept. 5, Attorney General Jeff Sessions announced the federal government was ending DACA, the Obama-era program that allowed undocumented immigrants who entered the United States before the age of 16 and met other requirements, to obtain temporary work authorization and protection from deportation for a renewable two-year period.
According to the Williams Institute, there are more than 75,000 LGBTQ DREAMers, named for the unsuccessful 2011 legislative effort which would have made the DACA provisions law. An estimated 36,000 LGBTQ DREAMers have used DACA’s provisions to pursue schooling and build a life in this country–a life that is now threatened by the removal of the protections.
The League of United Latin-American Citizens (LULAC) joins in for a special edition of Resource Center Presents: Voices of the DREAMers,” on Wednesday, Oct. 18. The panel will be moderated by the Center’s communications and advocacy manager Rafael McDonnell.
This is a FREE event but seating is limited so reserve your seat.