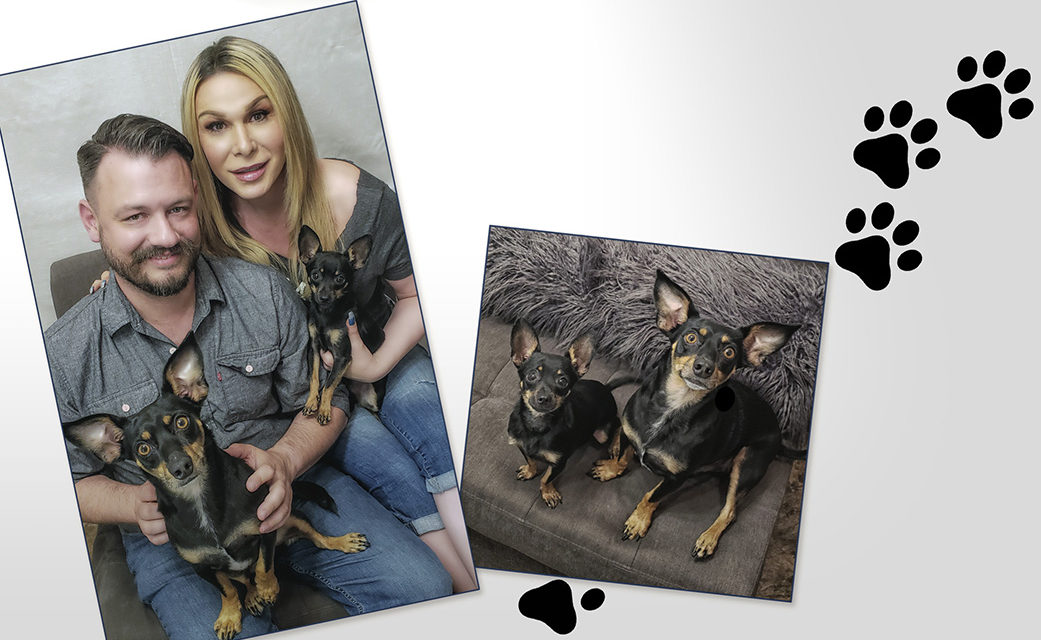 “I’ve never actually had any indoor pets of my own,” makeup artist/actress/entertainer/transgender activist Chaselyn Wade says. “I always said that I was being a responsible pet owner by not owning a pet!”

But then John Vance came along, and Chaselyn realized that her life had become much more settled and stable and that she just might have room and time for a four-legged furry baby. At least, she realized that after John asked for a dog for his birthday.

“John’s 40th birthday was last December, and all he asked for, all he wanted was a dog,” Chaselyn says. “We talked about it, and we decided that what we wanted was a [miniature pinscher]. But really my only real requirements were that it couldn’t be white — I didn’t want all that white dog hair all over my clothes — and that it had to have short hair.”

So they set out to find the perfect new addition to their family. The first place they went to was Dog and Kitty City, a small no-kill shelter at 2719 Manor Way, near the intersection of Cedar Springs Road and Inwood Road.

“The first dog we saw when we got there was Sammy,” Chaselyn recalls. He was a black-haired mixed breed on the smaller end of the size spectrum, about five years old.

“His ears were what got us. He had these big, old bat ears; he was just very different, unique,” Chaselyn explains. “We left there and went to three other places, but we ended up going back to the first place we went to and getting the first dog we saw. And that was Sammy.”

So Sammy went home with John and Chaselyn, and he was, she says, “such an absolute sweetheart.” But after a few months, she continues, “I just felt like Sammy was bored. So I told John that Sammy needed a little brother. He just shook his head and said, ‘Oh lord, you are gonna be that one, the one with all the dogs!’ And I said, no not all of them. Just one more, a little tiny one that won’t take up much room!”

So they headed back to Dog and Kitty City, this time taking their friend Gloria Devine, another local entertainer, with them because “Gloria was looking for a dog, too,” Chaselyn said.

They walked in the door, and “It happened again!” she exclaims. “The first dog I saw was this little one called Grande. He was the tiniest, littlest one there. And I said, ‘He will be perfect.’

Since neither was a puppy when they were adopted, it took them a bit to adjust to their new household and to each other, Chaselyn says. But they did so quickly and have now made themselves at home, with each other and with their two-legged parents.

“They both sit and shake now. We had to work on retraining Grande, but he learned quickly. Now it’s just ‘monkey see, monkey do,’” she says. “Actually, Sammy helped us potty train Grande. We take them out to potty, and Grande sees Sammy squat and he’s like, ‘Ok, if you are gonna squat there, them I’m gonna squat there, too!’

“It took them a month or so to get completely used to each other. But they get along great now,” Chaselyn says, adding with a laugh. “But they do have two completely different personalities. Sammy is like the old gay at S4 and Grande is the new twinkie gay at S4!”

For Chaselyn, who is still really brand new to being a pet owner, it is proving to be a most wonderful experience. “It is just so funny to watch them and spend time with them,” she says. “They are just so sweet and loving. I just like to wrap the little one up in a blanket and carry him around with me, like a baby. You know that movie, The Dingo Ate My Baby? Well, the dingo is my baby!”

Why Dog and Kitty City?

Chaselyn says that not only have she and John adopted both their furry babies from Dallas Humane Society’s Dog and Kitty City, they encourage all their friends looking for pets to go there, too.

“They do require a $200 donation to adopt, but it is worth it,” Chaselyn says on the shelter. “This is a no-kill shelter, and not only do they not euthanize any of the animals, they go to the other shelters and find the dogs and cats that are on the chopping block and rescue them. They are like, ‘We are gonna rescue this dog, and we are gonna keep it til somebody comes along to adopt it!’

“That’s what happened with Sammy and Grande,” she adds. “They were at other shelters, and their time was up. But Dallas Humane Society rescued them and kept them until we came along and adopted them.”

Creating a home for animals that need one is what Dallas Humane Society and Dog and Kitty City are all about, says Sandra Luhring, the agency’s director. And it’s not just about a home for the animals either, really: “I’ve been here since 1995; this is really a second home for me, too,” Luhring says.

Dog and Kitty Center, Luhring explains, is one of the smaller shelters in the city, but it is also, she adds, one of the best — especially for gayborhood residents since it is located right in the area.

“We are a no-kill shelter, and we do go get animals from other shelters to keep them from being euthanized,” Luhring confirms, noting that the adoption fee $200 for dogs and $100 for cats. “We have an average of 175 animals — dogs and cats — here each day, and we have a staff of seven and a team of volunteers. A lot of our animals will be adopted, but some are lifers; they will be here til they die, and we will take care of them and love them the whole time.”

Luhring said that all the animals at Dog and Kitty City are completely vetted. The cats are allowed to roam free through the shelter, and they work with each dog to make sure it is well socialized and ready to go to a new home.

That stress-free vibe doesn’t end with the animals either, Luhring say: “I think a lot of the volunteers come here to destress, too. This is a place where they can also relax and just enjoy being with the animals.”

For more information about Dallas Humane Society and Dog and Kitty City, visit DogNKittyCity.org. Animals available for adoption are posted on the website, as are forms for those interested in volunteering with the agency.