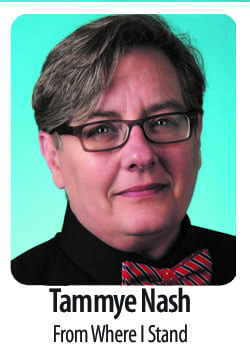 As I sit down to write this, it is Thursday, June 6, 2019 — 31 years to the day since my very first day on the job as an employee of Dallas Voice. It is also just four days since the 36th annual Alan Ross Texas Freedom Parade and the 2019 Dallas Pride weekend. Those two things together have had me thinking a lot these past few days about where we — the LGBTQ community here in North Texas — have been, and where we’re going.

Unless you’ve been hiding under the biggest, most remote rock imaginable for the past year, you’ve heard about the controversy surrounding the move to Fair Park in June. Organizers who made the decision offered good reasons: the rising costs of having the festival in Reverchon Park and the parade on Cedar Springs Road; the lack of parking around the park and The Strip; accessibility issues; lack of room to grow, and more.

And those opposed to the move had their reasons, too: Moving it from September to June goes against our tradition; taking it out of the gayborhood will hurt the LGBT businesses on The Strip; the neighborhood around Fair Park is not safe; the way in which the decision was made, and so on.

Everybody had their reasons. And they all had good reasons. What I found interesting, though, that both sides seem to claim one issue: visibility.

Some of those supporting the move have long clamored for Pride to be taken out of the gayborhood and into the world of the mainstream. Holding Pride in the gayborhood, they said, was like preaching to the choir. Pride, they said, needed to get back to its roots as a protest, a riot, if you will, of LGBTQ people standing up for themselves, speaking out to demand their rights. And it needed to be out there in the face of the straight world, the ones who need to hear that message the most.

Yes, having Pride at Fair Park is not the same as having it in the middle of Downtown Dallas. But it’s better than hiding Pride away in the gayborhood, they said.

Personally, I was opposed to the move in both time and place, mainly because it felt like we were abandoning traditions that had been such a big and beloved part of my life for so many years. I eventually accepted the inevitable though: There were too many factors beyond my control or influence, and Pride was going to move to Fair Park.

But still, four days after the fact, I am pondering, and I think I have figured out what has bothered me the most about the whole controversy. And it all comes down to two things: visibility and unity. Oh, and celebration. That’s three things.

Yes, being visible as LGBT people, as an LGBT community is an absolute necessity for us these days. To let our fear and our haters push us back into a closet and make us invisible again. To lose our visibility is to lose our power and, ultimately, our identity.

But we can’t wait around for a parade or for a specific month or until we are in a specific neighborhood to be visible.

Wearing rainbows and marching or riding with a crowd isn’t enough. We MUST be visible, every day, in every place, in every way.

In addition, this controversy has deepened existing rifts in our community and created new ones. We cannot afford that. We are not a homogenous tribe, and we must never give up our unique and authentic selves, either as individuals or as part of either a sub-community or the overall LGBTQ community. But we must remain a tribe, and we must support and care for each other, even when we don’t agree.

Yes, my friends, I am here to tell you that it is, indeed, possible to love and care for someone even when you disagree with them, even when you are angry with them.

And then there is the idea of celebration. Yes, we are under attack on all fronts. Our government leaders are passing laws that allow people to openly discriminate against us. Our black transgender sisters are being murdered right here in the streets of Dallas. All the progress we have made in the 50 years since Stonewall are at risk.

But we also deserve a chance to celebrate. And to me, that’s what Pride is for.

A friend — someone I love, admire and respect — said that for her, one of the most important parts of the Pride parade has always been the chance to stop the mundane world traffic and make them look at us, make them see us, to put our most outrageous of LGBTQ selves right there in their faces. I understand that. But that’s not what Pride is for me. For me, Pride is a chance to celebrate all the things that are beautiful and wonderful about me, my life, my friends, my loved ones, my community.

Yes, I believe in protest. I call for protest often. But I don’t want my birthday party to be a protest march, and for me at least, Pride is my Big Gay Birthday Party. I think we must have time for both — for protest and for celebration. And I don’t think they should always be the same thing.

Tammye Nash is managing editor of Dallas Voice, Out North Texas, DallasVoice.com, and DVtv Studios. She is old and can be cranky, but she still loves a good party.