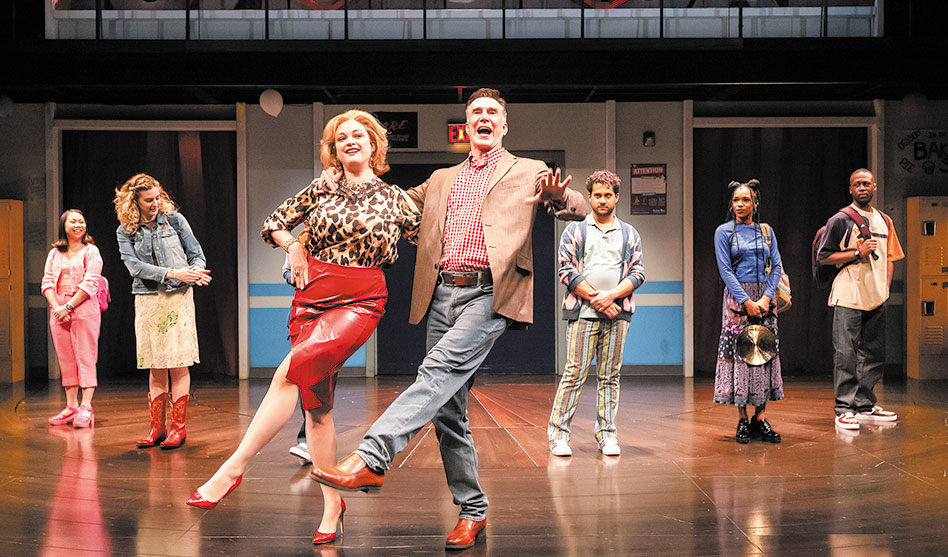 Did you know the score in 2004? Perhaps not if you’re like playwright Vichet Chum, whose new comedy, High School Play: A Nostalgia Fest was informed by his senior year at Creekview High School in the north Dallas suburb of Carrollton. Chum was, he says, “very much a closeted gay kid” who found safety and acceptance in the theater department.

“It was a complicated experience, but really lovely in many ways,” Chum says, recalling that he greatly enjoyed the opportunity to perform but bristled at how “art” became a competitive sport in speech and debate tournaments and at the annual University Interscholastic League one-act play contests. 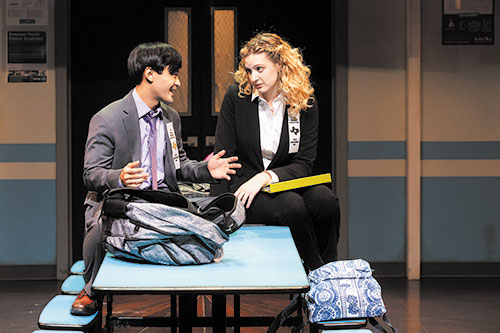 One-act also hit him where it hurt when some irate parents demanded that the Carrollton/Farmers Branch ISD school board reject a play with gay content, John Guare’s acclaimed Six Degrees of Separation, as Creekview’s UIL entry in Chum’s senior year. The same thing happens in High School Play, which premiered in January at the Alley Theatre in Houston and will become available for online streaming on Feb. 14.

When theater students in the play — including Dara, an earnest Cambodian-American like Chum — are bummed that they have to change scripts, their drama coach, Mr. Dirkson, reports to them that some parents watched the movie version of the play and freaked out over a nude scene with actor Will Smith and another guy.

Dirkson and his co-director, Ms. Blow, choose Dara to plead their case to the school board, explaining that, notwithstanding the gay content, “Six Degrees of Separation is about what happens when an unlikely person shatters your entire sense of the world. It’s about the ability to be changed by a person when you least expect it.”

For Dara, that person is Paul, a junior transplant from New York City who is openly gay but not campy like Dara’s fellow senior thespian, Rich. Paul is handsome and confident and has street smarts, and his theatrical chops make him a big man on campus at fictional Riverside High School.

The play is set in “A North Dallas suburb, the 2003-2004 school year.” The time and place drive director Tiffany Nichole Greene, also a native Texan, to lace the show with songs by Britney Spears, Vanessa Carlton, Simple Plan, Weezer, Green Day and others.

Greene and Chum became fast friends in graduate school at Brown University, an Ivy League university in Providence, R.I. Both were studying to become actors, although Greene was more interested in directing and Chum has been writing “since I was a kid.”

Greene became a successful freelance director and has worked at Dallas Theater Center. She is also the resident director for Hamilton: An American Musical on its “Phillip” tour.

Chum moved to NYC, where he sometimes acts while “penning plays left and right,” including a solo show called Knyum. “which means ‘I’ or ‘myself’ in the Cambodian language,” he said during a phone interview in December. “My parents are from Cambodia; they were survivors of the Cambodian genocide, and they met in the Philippines in a refugee camp.”

I met Chum in person at the opening of High School Play in Houston on Jan. 26. He was, he said, “really, really excited to show this play to an LGBTQIA demographic. It is my love letter to young gay kids, and I hope it helps them understand their identities.

“Much of my endeavor is for the play to create a safer place for conversations around gender, race and identity.”

Chum said he “felt the most joy” in high school theater in Carrollton, and the play will surely remind many viewers of their glory days as teenaged thespians. For others, the passion and pride of UIL one-act competitors in the Lone Star State might be surprising. For example, a Houstonian who grew up in Pennsylvania, reviewing the Alley show for HoustonPress.com, wrote, “Who knew that Texas is obsessed with drama with the same fervor as Friday football?”
Well, not exactly.

According to the playbill for High School Play, one-act makes up only 1 percent of the UIL’s more than $12 million budget; however, the competition, with more than 14,000 students participating each year, surely provides plenty of “that inevitable high school drama,” wrote research dramaturgs Becca Silka and Jaurius Norman.

A dazzling feature of the Alley’s production are the costumes designed by Ari Fulton, from Melissa Pritchett’s over-the-top animal print blouses and a shocking red leather skirt as Ms. Blow to Todd Waite’s Wranglers and western boots as Dirksen.

Dallas Voice pageant fans might remember Pritchett from her preliminary talent win as Miss Montgomery County in the 2001 Miss Texas Scholarship Pageant in Fort Worth.

Waite, who is gay, played Sen. Edward Dirksen in The Great Society at DTC, but without the Texas accent he mastered for High School Play. The tall drink of water, who hails from Canada, is in his 21st season as a resident acting company member. Years ago, he played Enjolras in the Canadian premiere of Les Misérables.

High School Play: A Nostalgia Fest runs through Feb. 13 on the Alley’s big Hubbard stage, with tickets starting at $28. For further information, visit alleytheatre.org or call (713) 220-5700.

A digital version of a performance filmed live at the Alley will become available for viewing Feb. 14-27. Digital tickets are $25 and can be purchased at alleytheatre.org. A limited number of digital tickets will be sold.