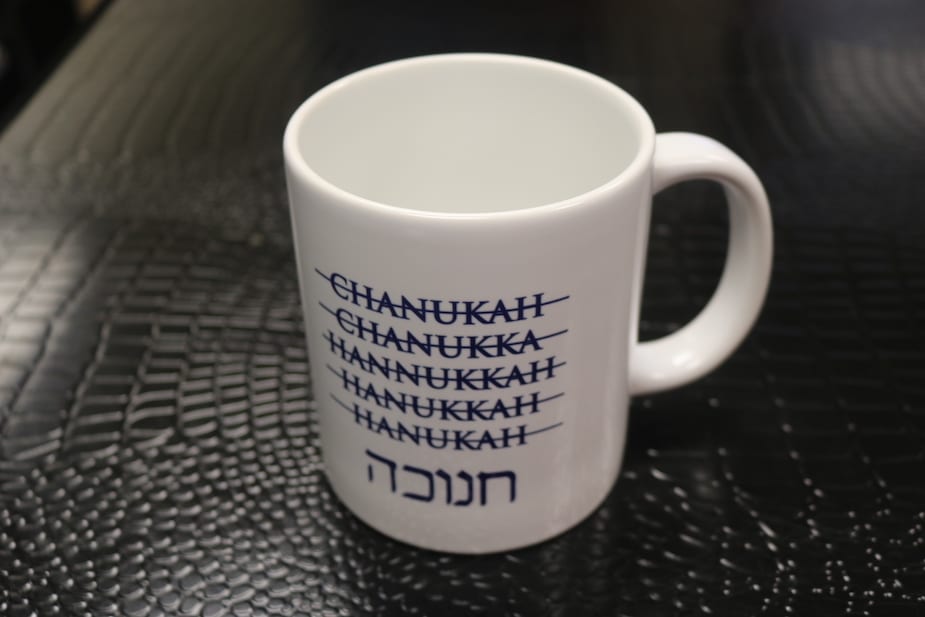 People who know me know I hate Hanukkah.

Among other things, it’s the least important holiday on the Jewish calendar. It commemorates a war — the war that marked the first recorded use of guerrilla warfare in history — rather than something religious. The story of the oil lasting eight days was entirely made up and didn’t come into existence until a couple of hundred years after the holiday was created.

And we can’t even decide how to spell the damn holiday. Does it start with an h or a ch? Shouldn’t it actually begin with a “kh?” Does it have one or two n’s? One or two k’s? Does it end with an a or an h? If you transliterate the Hebrew spelling (as seen on the mug above) it should be spelled Khanookah, the only way absolutely nobody spells it.

Flash forward to today and the fraudulent Fox News War on Christmas: How dare I say, “Happy holidays.”

My first reaction to the war on Christmas accusation was to explain my vague holiday wish. After all, there are multiple holidays at the end of the year — Christmas, New Years, Hanukkah, Kwanza, Festivus — and I really don’t know your religious affiliation or what you celebrate, but whatever it is, enjoy your traditions.

But that assumes I’m talking to intelligent people and, damnit, people want to be wished Merry Christmas.

So my next reaction was to retract my holiday wish and replace it with a offer of death and destruction instead. But Fox-News-War-On-Christmas aficionados just take that as proof of their own religious oppression and I hate to feed a persecution complex.

So here’s my latest answer to anyone who objects to my perfectly innocent and inclusive “happy holiday” wish.

The next time someone angrily responds to “happy holidays” with some idiotic comment about how you’re oppressing them by not wishing them “Merry Christmas,” here’s how to answer:

“Christmas, huh? You ever hear of Chanukah? You know what it celebrates?”

“Chanukah commemorates when the Assyrians tried to stop the Jews from practicing their own religion. A few thousand of us rose up and beat the holy crap out of an army of 40,000. And just to piss the Assyrians off even more, when it was all done, we not only continued observing our old holidays, we totally made up this ridiculous additional holiday and made it last eight nights because we pretend the oil that was left in the temple lasted eight nights.

“You were complaining I didn’t wish you a Merry Christmas? I’ve had a very difficult year so don’t piss me off or I’ll add another endless holiday. Now have a happy holiday season and get out of my face.”

And, by the way, if I know you’re Christian, especially if you’re observant — and by that I mean Christmas means more to you than just how much stuff you’ll get — I usually do say, “Merry Christmas.” But if I just happen to wish you happy holidays, New Years is coming a week after Christmas and I might just like you enough to hope that holiday is good for you too. No offense meant. I’m really not trying to oppress you.