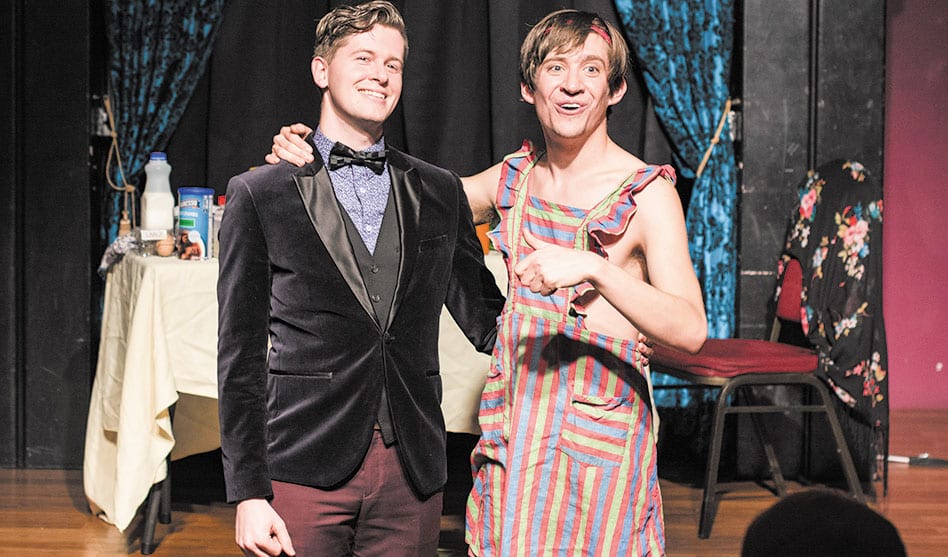 To make a solo show about his late mom, performance artist John Michael learned he has to break a few eggs… then add beef  and breadcrumbs

When Dallas audiences first met John Michael, in one of his first of (now) seven one-man shows, he was a messy, suburban North Texas kid barely, old enough to drink, who talked about his relationship with his parents, how he didn’t want his boyfriend (if he ever had one) to see his plays, how he coped with an STI from a one-night stand.

What a difference some years — and a lot of living — can make.

He’s now pushing 30, his mother passed away unexpectedly, he’s relocated to Chicago and now has a gender-non-conforming partner (also an actor) who has definitely seen his shows.

“I am summoning at this moment [my late mother] from the dead right outside Trump Tower,” he says over the phone from a stretch of land on the banks of the Chicago River. “There are like 10 storefronts [here] — all vacant. It’s the quietest place to hold an interview.”

He relishes the economic stagnation in the shadow of our Commander-in-Creep’s storied stories. Who knows? It — and this entire conversation — may make it into one of his plays eventually. Or some variation of it.

That’s because his solo shows — including Meatball Séance, which opens at the Dallas Solo Fest at Dallas Children Theatre’s home, The Rosewood Center for Family Arts, on June 7 — are drawn from the intimate details of his own life. And while it usually takes John Michael (he eschews a separate surname on the stage) an hour to perform them, even though the scripts are rarely more than 10 pages in length.

“My shows are like lily pads — I know the pads I need to jump to, and I will land on them, but I might need to do them out of order because of what happens onstage.”

That’s certainly the case with Meatball Séance, which John Michael debuted in Dallas back on Christmas 2016 for a one-night-only performance and which, he now estimates, has only about 20 percent of its original content remaining.

“There’s a lot of audience participation, and I’m only onstage for 10 minutes alone. The play changes because the audience is different each time, so depending on what the audience members give me, I [jump around]. Like, while we’re cutting vegetables — there are a lot of things I can do to help them have fun. One of the joys of the show is that, because of the structure, it forces me to listen.”

I suggest it sounds like a cooking segment from the Today show about his dead mother.

“Exactly,” he smiles back.

If it sounds morbid, John Michael sees it, rather, as intensely human.

“When Mom died and then [his mentor and friend] Matt [Tomlanovich] died, I ran away to Chicago to start a new life. When I was first here, though, people would ask me why I moved and I told them. And it made it all the more awful to hear this person who I barely knew to say, ‘I’m sorry.’ Those words bring the mood of the moment down. But what else can you say? The boldest thing you can say [in that context is], ‘I don’t know what to say.’ So for the longest time I stopped talking about my favorite person in the world, my mom. It was almost like a second death. I realized I was dealing with people’s own insecurities about mortality.”

Meatball Séance — in which, yes, he enlists some attendees to join him onstage and actually cook his mother’s recipe to conjure her spirit, so that he can introduce her to his boyfriend — is more than theater, more than standup. It is, for John Michael, an active way of dealing with, and normalizing, the grieving process.

“When you touch a memory, you add to it,” he says. “I have a relationship with the memory of my mother, just like how you have to mix your meat with the eggs with the breadcrumbs with the parsley and garlic and let them meld [to create a meatball].”

It’s not a dour show, though, but an affirming, interactive, community-building experience.

“It’s about setting up the audience for success and learning how to have fun. They can do whatever the fuck they want onstage as long as they come at it with an open heart. It works on so many levels. I have found more ways for the audience to have a blast and challenge this negative association with the phrase ‘audience participation.’ The fun the audience members are having onstage is to make them feel the way my mother made me feel. My grieving is active.”

John Michael has matured as well in his approach since the early days; he has massaged simple word choices, like asking “Are you comfortable with a knife?” instead of, “Here, dice this garlic,” to make the interactions for engaging.

“When you make your audience do more work, they have more of a buy-in,” he says. “But it’s always been in my aesthetic to embrace not being super polished. Matt [Tomlanovich] used to say, ‘If something’s too smooth, you can’t grab onto it.’”

And when John Michael is at work, expect to hold on tight.