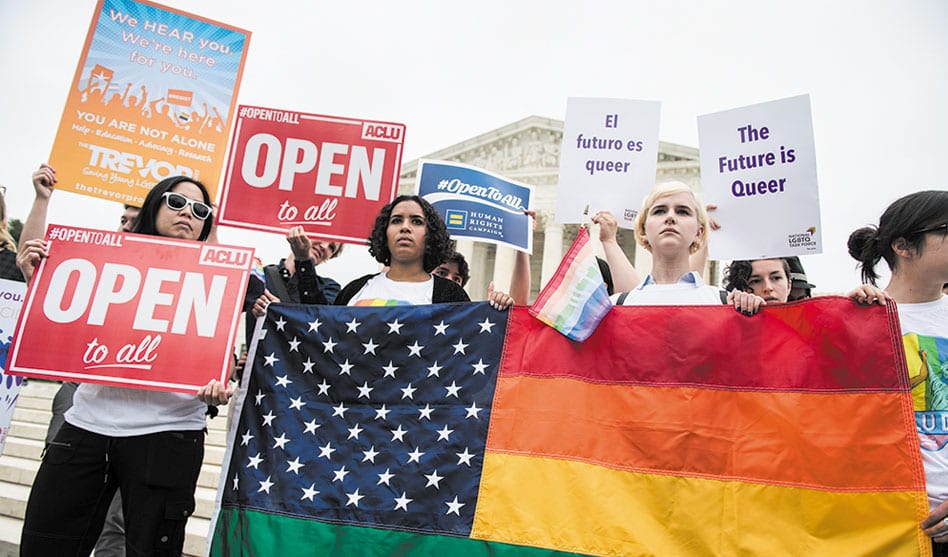 The June 4 headline –– “Supreme Court rules narrowly for Colorado baker who wouldn’t make same-sex wedding cake” –– referred to the decision by the justices in a case involving David Mullins and Charlie Craig, a Denver couple denied a wedding cake by Masterpiece Cakeshop owner Jack Phillips. Citing his religious beliefs, including opposition to same-sex marriage, Phillips declined to make the cake.

Mullins and Craig complained to the Colorado Civil Rights Division, which ruled in 2014 that Phillips violated Colorado’s nondiscrimination statute. Phillips and his lawyers asked the court to grant review, and the court heard oral arguments in the case on Dec. 5, 2017.

The 7-2 vote in favor of Phillips, with Justices Ruth Bader Ginsburg and Sonia Sotomayor dissenting, was not narrowly decided, but was instead narrowly interpreted — referring to specifically the case itself rather than the ruling. That is despite tweets from conservative elected officials disparaging the headline, while missing the point of the ruling.

Among them were Rep. Jeff Leach, R-Plano. In reply to the ruling, Leach wrote, “Narrowly? Give me a break. This is a strong, overwhelmingly bi-partisan decision.” And in another, he argued the headline was “intentionally misleading the fly-by reader to believe the narrow ‘holding’ was a narrow ‘decision.’”

Writing for the majority, Justice Anthony Kennedy said the court decided in favor of Phillips in this case because of a commissioner’s antagonistic comments.

“The neutral and respectful consideration to which Phillips was entitled was compromised here. The Civil Rights Commission’s treatment of his case has some elements of a clear and impermissible hostility toward the sincere religious beliefs that motivated his objection,” Kennedy wrote.

“Nevertheless,” Kennedy added, “while those religious and philosophical objections are protected, it is a general rule that such objections do not allow business owners and other actors in the economy and in society to deny protected persons equal access to goods and services under a neutral and generally applicable public accommodations law.”

“When a couple contacts a bakery for a wedding cake, the product they are seeking is a cake celebrating their wedding — not a cake celebrating heterosexual weddings or same-sex weddings — and that is the service Craig and Mullins were denied,” Ginsburg wrote.

Minneapolis labor and employment lawyer JoLynn Markison, a partner at the law firm Dorsey and Whitney, said the case would have long-reaching effects for businesses and similar cases.

“In so doing, the Supreme Court sidestepped the ultimate question in this case — whether freedom of religion can be used to discriminate against gay people in places of public accommodation,” Markison said.

Lambda Legal CEO Rachel Tiven called the ruling a pathway for future decisions that could adversely impact the LGBT community.

“Religious freedom under our Constitution has always meant the right to believe whatever you wish but not to act on your beliefs in ways that harm others. The court … alarmingly fails to heed that distinction,” Tiven said. “The Supreme Court has become an accomplice in the right’s strategy to hollow out one of its finest achievements, the right to equal marriage.”

One of those cases is pending review by the Supreme Court, Arlene’s Flowers v. Washington. Barronelle Stutzman, who owns Arlene’s Flowers in Richland, Wash., declined to make a floral arrangement for a same-sex couple’s wedding because of her religious beliefs. The couple and state attorney general sued. While the Washington State Supreme Court ruled in the couple’s favor, Stutzman appealed.

It is just one of the cases the court could consider in the future testing the limits of religious liberty. But the debate will not just play out in the courts.

Saenz is a proponent of the bill from the last legislative session restricting bathroom access to transgender individuals as well as other religious exemption bills.

Markison agreed. “We can expect to see many more instances of public businesses refusing to provide services to gay people in the name of religious freedom,” she said. “The Supreme Court may have dodged the issue for now, but it will not be able to avoid it forever.”

Until then, Craig and Mullins said in a statement provided by the ACLU, they will keep fighting: “[This] decision means our fight against discrimination and unfair treatment will continue. We have always believed that in America, you should not be turned away from a business open to the public because of who you are. We brought this case because no one should have to face the shame, embarrassment and humiliation of being told ‘we don’t serve your kind here’ that we faced, and we will continue fighting until no one does.”