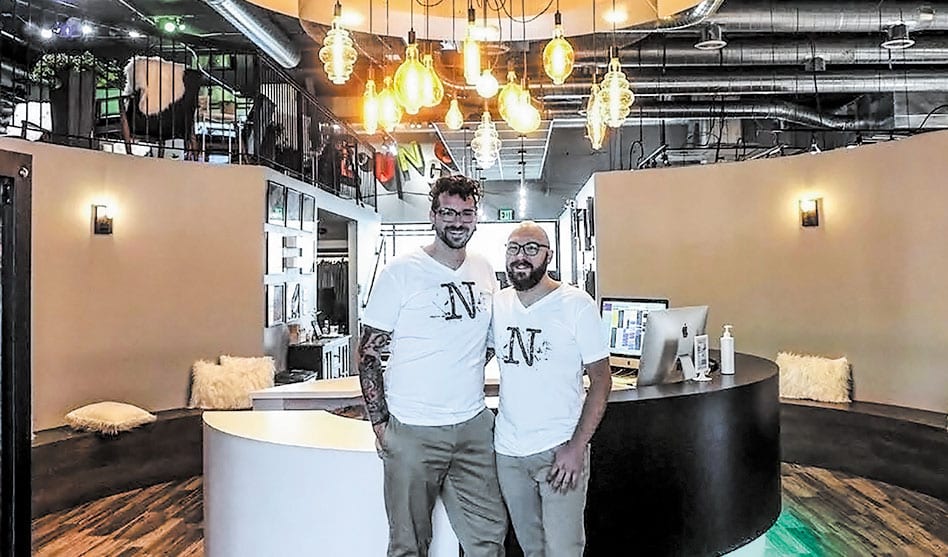 That’s more than just a catchy slogan for Fort Worth’s Novak Hair Studios. It’s a way of life — for the salon, and for its founders, Benjamin and Justin Hudgins.

Novak Hair Studios, located on West Lancaster Street, is the DFW Metroplex’s only “fully sustainable” salon, and Fort Worth’s first “zero-waste” salon, according to the couple. But they hope that the Fort Worth location is just the first of many Novak salons to come.

Living and working “green” is a family tradition for Benjamin Hudgins. His grandfather, Novak Bullard, was a beekeeper in Oklahoma and one of the first to begin talking about the dangers of pesticides, their devastating effect on the bee population and the vital link between bees and human life.

One of the first sights to greet visitors as they walk in and head to the receptionist’s desk are displays on facing walls highlighting Bullard’s work and explaining his story — and how his predictions about the dangers of pesticides are coming true.

It was his grandfather’s work, Benjamin said, that first put him on the path toward a greener life — at work and at home. Novak Hair Studios — Novak is also Benjamin’s middle name — is the result.

Benjamin is the youngest of six children, raised in Allen by a single mother, an “educated woman” who struggled to provide for her children. He said he inherited his mother’s “strong work ethic” along with his grandfather’s passion for conservation. “I worked all my life, since they would allow me to work,” he said.

That work ethic came in handy when, at age 16, he left home and struck out on his own after coming out as gay. “My mother was a very devout Christian, and she really struggled with it all when I came out,” Benjamin said. “So I moved out when I was 16, and I’ve been on my own ever since.”

Benjamin and Justin first met and became friends as teenagers through AOL chat rooms. They had a lot in common. Justin said he, too, grew up in a religious family, “with a bit of division on acceptance.” It was years later, and after many obstacles that his dad took his first step in what he describes as his father’s “180-degree turn-around. In fact, he partnered with us” when Justin and Benjamin decided to open Novak.

They lost touch for a while, but then one day, Benjamin said he decided to sign on to AOL again, “just to see if I could still remember my passwords.” As luck would have it, Justin — who had moved from his hometown of Mansfield to Florida to help his parents open a construction business there — happened to be online at the same time.

They renewed their friendship, and that friendship evolved into more. Justin and his family returned to Mansfield, and he and Benjamin became a couple when Benjamin was 19 and Justin was 22, and have been a couple for 14 years now.

Justin has “always been drawn to customer service,” and has spent his adult life working in construction with his family and in restaurant management, Benjamin said of his husband. Benjamin made a name for himself as an “international platform artist,” which means he worked for a corporation as part of a team that designed the new trends in hair each year, and then traveled the country teaching those trends and the techniques necessary to create them to other hair stylists.

In that job, Benjamin said, he got the chance to do and see “some really cool stuff.” But it also gave him a chance to see “a lot of the same problems, over and over,” at salons all across the country, and the way that the “corporate culture was changing the salon experience” — and not for the better.

But he was also working all the time, and his friendships began to suffer, as did his relationship with Justin. And he saw the same thing happening to other stylists working to stay at the top of their game and be successful. Benjamin believed he could create a system that would let him have a better work/life balance, and he wanted to be able to share that with other stylists, too.

That drive, coupled with his passion for sustainability in his work and his personal life, “gave me my ‘why,’” he said. “I told Justin I wanted to build a completely sustainable salon. And he said, ‘Let’s do it.’”

Justin and Benjamin worked together to design the salon, creating a mixture of modern and industrial elements, with a bit of Mid-Century

Modern thrown in for good measure. Justin was still working for his father’s construction company at the time and was project manager for the salon build.

Now Justin works full time at the salon, handling the customer service/business side of things. Benjamin spends a couple of days a week “behind the chair” (working as a hair stylist). But he spends the majority of his time handling the creative side of the salon, helping the stylists who lease space there expand their own knowledge and skill sets and continuing the evolve the salon’s culture.

There is a centrally-located shampoo station, where salon employees are available to wash clients’ hair, a small cubbyhole with studio lighting for before-and-after photos of clients hair that stylists can use in promoting their work. And there is a loft lounge where clients undergoing some styling process can wait in comfort and relative privacy, giving the stylists a chance to take care of other clients in the meantime.

The space is open to the ceiling, where the ductwork and beams add a touch of industrial style, and special touches — like the “cloud” of Edison bulbs over the reception area and original acrylic pour artwork by Benjamin and Justin themselves on the walls — give Novak

Hair Studios the high-end salon look and feel the couple aimed for in their efforts to provide clients with the “ultimate salon experience.”

But it’s the design behind the design that really sets Novak apart — things like the seven recycling stations located throughout the salon, including a centrally-located one where the chemicals are cleaned from the empty containers to be recycled. All of the salon’s paper products are made from recycled materials, and even the hair clippings — which in other salons are swept up and thrown in the trash — are reused, Benjamin said. “The hair is used to clean up oil spills in water,” he explained.

The couple used special fixtures on every sink and faucet that allow the salon to use 65 percent less water than a “normal” salon. And they installed a special AC system that has 24 separate zones that can be individually controlled for significantly higher energy efficiency.

The VRF air system — widely used in Europe where energy use standards are much more strict — also helps filter out the chemicals used in the salon, making the environment much more pleasant (without the usual “salon smell”) and much safer for the stylists themselves.

Every aspect of the salon, the couple said, is built around the sustainability mantra of “Reduce, Reuse, Recycle,” and they are working to expand their reach by developing their own brand of eco-friendly products that will be as green as their salon. “Right now, we are working on packaging,” Justin said. Normal packaging for hair care products can’t be recycled because of the chemicals in the products they contain. “But imagine having an aluminum shampoo bottle that, when it’s empty, you just bring to the salon and get refilled.”

As the original Novak Hair Studios nears its one-year anniversary, Benjamin and Justin are already looking ahead toward their goal of expanding. “This salon is our baby,” Justin said. “But we don’t want just one baby. We want to have several babies.”

Benjamin said he and his husband hope to open a Novak Hair Studios “in Dallas, in Southlake, around the state and beyond. There’s no limit. We’re looking to build a lifestyle brand, with sustainability as a company culture.

“We want to help create sustainable communities,” he continued. “We as business owners have to stand up and make a difference.”

Novak Hair Studios is located at 250 W. Lancaster St. near downtown Fort Worth. Reach them by phone at 817-592-4247 or by email at info@novakhairstudio.com. Clients looking for a new hair stylists can call the salon and receptionists there will help match them with a stylist. The salon also has an app, available in the Apple App Store and on Google Play, that clients can use to find a stylist and set appointments.