LGBT historical marker to be placed at Crossroads 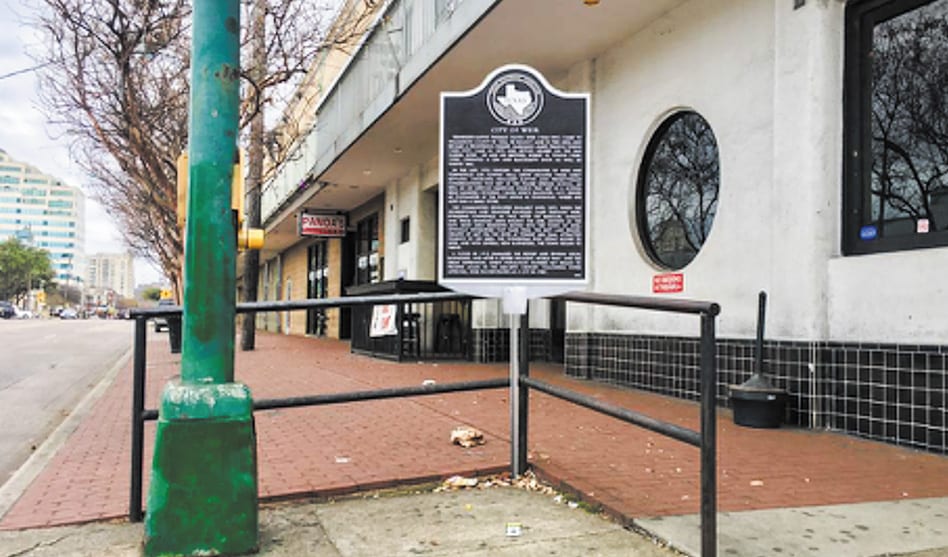 A mockup of how the marker will be placed. (Courtesy Robert Emery)

First LGBT plaque in Texas will stand outside JR.’s on Cedar Springs Road

The first LGBT historical marker in Texas will be unveiled outside of JR.’s Bar & Grill on Wednesday, Oct. 10, at 7 p.m.

The project was suggested by Robert Emery and funded by donors through The Dallas Way. In December 2016, at a fundraising brunch at the home of Richard Shampain and Jeff Henderson, 12 people agreed to fund the project.

Erin Moore was the first to contribute. She said the amount needed — $1,800 — was small enough it could be raised that afternoon. Moore works for County Commissioner Theresa Daniel and had attended a meeting about placing “Undertold Stories Markers.” She said a number were being approved around the county including one at the Juanita Craft house and one in Little Mexico.

“Certainly the LGBT community should be included,” Moore said.

Emery said he and several other people from The Dallas Way, city of Dallas Historic Preservation Officer Mark Doty and Sam Childers from the Dallas County Historical Society met with Dwayne Jones of Preservation Texas in June 2016. Jones was interested the LGBT community applying for what he hoped would be the first of many LGBT Subject Markers in Texas.

They discussed a number of topics — including Resource Center, Cathedral of Hope, the Turtle Creek Chorale and Dallas Voice — but decided to focus on the Crossroads for the first marker.

The corner of Throckmorton Avenue and Cedar Springs Road was called “The Crossroads for several decades because of one of the early retailers to open on the Strip. The store, called Crossroads Market, was an eclectic mix of antiques, picture framing, jewelry, cards and magazines, each sold by different vendors. Among them were Bill Nelson and Terry Tebedo, who created the Resource Center Food Pantry when they put up a shelf in the store for people to leave cans of food or pick up cans of food. William Waybourn, another of the store’s owners, moved to Washington, D.C., to found the LGBT Victory Fund.

Ed Oakley with Caven Enterprises agreed the marker should be placed on the side of JR.’s and arranged to get permission for that from the Caven Corporation that owns the building.

Childers wrote the required five page narrative for the application he called, “The Crossroads: The GLBT Community in Dallas.” Markers generally commemorate a site or event that is more than 50 years old. So in the application, Childers explained some of the community’s history:

“The city was home to one of the first gay bars in Texas (1947); the first gay organization in Texas, ‘The Circle of Friends,’ was established in Dallas in 1965; and the city’s GLBT community held Texas’s first gay Pride parade in 1972,” he wrote. “The area surrounding the intersection of Cedar Springs Road and Throckmorton Street in Dallas has been considered the center of the GLBT community in Dallas since the early 1970s and is referred to ‘the gay crossroads or ‘The Crossroads’ for short.”

Circle of Friends is now known as Cathedral of Hope and that first bar, Club Reno, was on South Ervay Street. Other downtown bars moved to Oak Lawn in 1980 to make way for one of the city’s other gay institutions, the Dallas Museum of Art.

The Texas Historical Commission would take Childers’ narrative to condense into a few paragraphs for the marker.

Emery submitted the application on Oct. 10, 2016, two years to the day before this week’s unveiling, which Emery said he planned to coincide with LGBT History Month.
In November 2016, the Dallas County Historical Commission unanimously approved the Crossroads marker application. In March 2017, The Dallas Way paid $1,800 for the plaque. Dallas County contributed $500 toward it, and Caven formally agreed to allow the plaque to be put on the building, but within the last week, a decision was made to place the marker on a pole in front of the building.

There are 16,000 Texas historical markers throughout the state, and markers have been placed in every one of Texas’ 254 counties. █