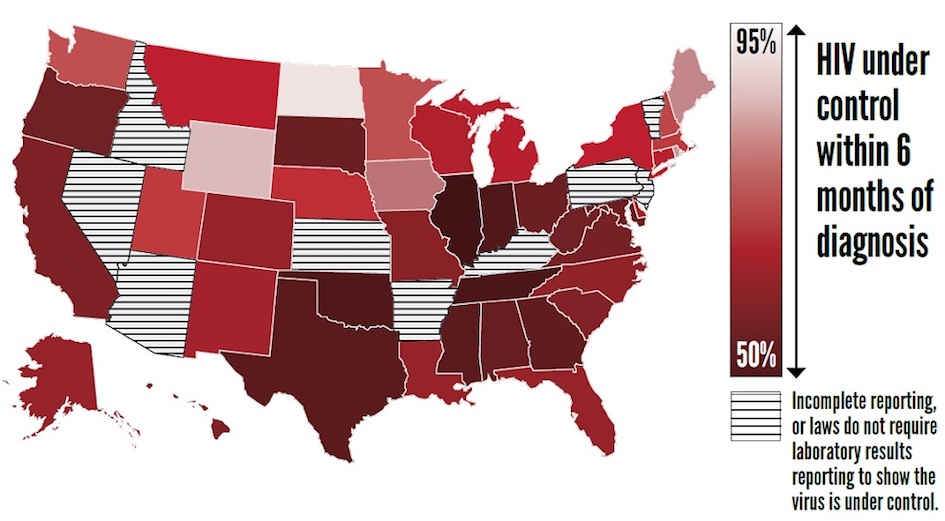 The Trump administration announced it wants to reduce new infections by 90 percent in the next decade. But not enough people who have HIV know they have the virus and too many with the virus are not getting treatment.

About 38,000 new HIV infections still occur each year, according to the CDC report.

In 2017, the latest year for which statistics are available, the group least likely to get HIV treatment were those with the virus who were 13-24 years old.

The CDC recommends that healthcare providers can help lower the number of new infections by routinely testing all of their patients. They should test people at high risk, including gay and bi men, at least once a year.

Someone who tests positive should begin treatment as soon as possible after diagnosis. PrEP, the CDC recommends, should be prescribed to all patients who could benefit from it.

The CDC ranked states based on what percent of people newly diagnosed with HIV had the virus under control within six months. North Dakota ranked highest with almost 95 percent controlling the virus in half a year. Among the lowest was Texas with only 54.8 percent getting to an undetectable level in six months. Even Mississippi did better than Texas with 56 percent. Two states did worse — Oklahoma was 53 percent and Illinois was 51 percent.