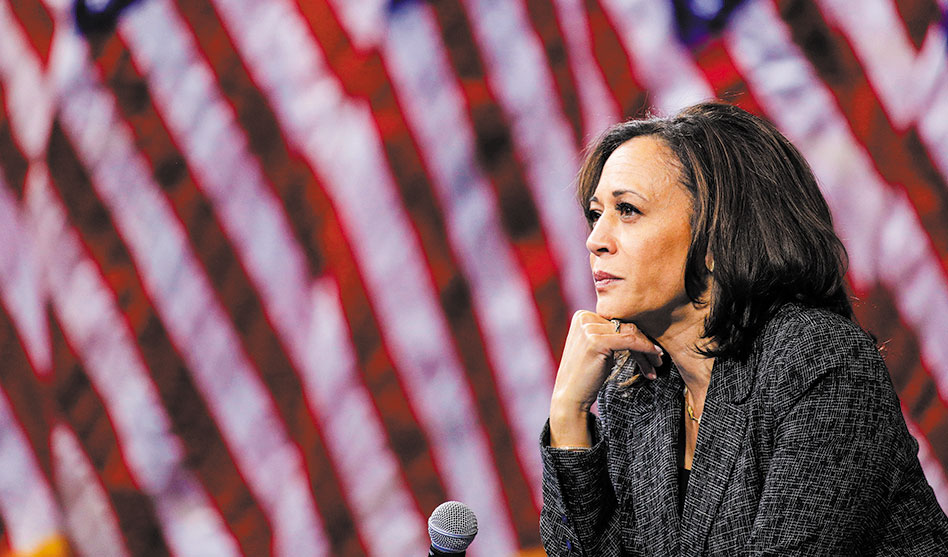 It was not a big surprise, but it was a much-anticipated revelation: Democratic presidential nominee-apparent Joe Biden announced Tuesday, Aug. 11, that he has chosen U.S. Sen. Kamala Harris of California to be his running mate.

Political observers considered Harris the top contender for months, and various surveys and data indicated she is highly popular with the LGBTQ community.

And behind the headlines Tuesday, NBC News reported that the Biden campaign has also assigned openly-lesbian commentator Karine Jean-Pierre, one of his senior advisors, to serve as his running mate’s chief of staff.
“Kamala Harris is a strong choice,” said Nadine Smith, executive director of Equality Florida. “She is smart; she’ll KO Pence if he’s not too afraid to debate her.

“Selecting Kamala Harris shows that Joe Biden isn’t afraid to have leaders around him who push him forward on race and other critical issues. She’s a stellar pick,” Smith said.

Richard Socarides, another long-time LGBTQ Democratic activist, called Harris a “smart choice and the right choice.”
“I think she’ll be a great vice president,” Socarides continued, “and she will eat Mike Pence alive at their debate and spit him out on the floor — as he deserves.”

Lorri Jean, chief executive officer of the Los Angeles LGBT Center, the largest of its kind in the nation, said Harris was a “moderate” choice for Biden but a good one for the LGBTQ community.

“Kamala Harris was one of the moderates on the [vice presidential] list.  Biden was definitely sending a message in that regard,” Jean said. “Fortunately, from an LGBTQ perspective, she has long been an ally.”

Biden pledged during a Democratic debate in March that he would choose a woman for his running mate. Since then, various news media examined lists of likely choices.

Some lists, including that of the New York Times, included openly-lesbian U.S. Sen. Tammy Baldwin. All the lists included Harris — usually at the top of list, too.

Biden’s choice of Harris makes her the first Black woman and the first candidate of Asian descent to run on a major party’s ticket for the White House. She is a popular Democrat who made a strong bid for the party’s presidential nomination herself in a field that, early on, included more than two dozen viable candidates.

Harris launched her campaign in January 2019 in Oakland, with a rally attended by more than 20,000 supporters, and she polled third early in the year, behind Biden and U.S. Sen. Bernie Sanders. Following a Democratic debate in which she confronted Biden over his pride in having worked with segregationists “to oppose busing,” her campaign saw a surge of support.
But other candidates popular with the LGBTQ community, including openly-gay candidate Pete Buttigieg, soon had their own surges and quickly leap-frogged over Harris. She dropped out of the race in December, citing insufficient funding for her campaign.

A study of campaign contributions by zip code showed she had been the second strongest fundraiser in heavily LGBTQ zip codes, behind Buttigieg.

Harris was one of the few Democratic presidential candidates to release her own plan addressing a wide range of LGBTQ issues. She promised, as president, she would establish a position of “chief advocate for LGBTQ+ affairs” in the White House, reverse the Trump administration ban on transgender people in the military and “ensure that religion cannot be used to discriminate against LGBTQ+ individuals.”

But the selection of Harris to join the Biden ticket was never a certainty. As recently as July 29, the Washington Post reported an anonymous source as saying that one of Biden’s key advisers in vetting the VP list, former U.S. Sen. Christopher Dodd, was arguing against choosing Harris. Dodd was reportedly unhappy with Harris’ debate attack on Biden’s working with segregationists, but Dodd issued a statement saying the anonymous source’s comments “do not represent my view of Sen. Harris … .”

Career on the fast track
Harris was sworn into the U.S. Senate just three years ago but has quickly risen to become one of its best known members. On the Senate Judiciary Committee, she played a pivotal role in grilling some of President Trump’s most controversial nominees, including his first attorney general, Jeff Sessions, and his second Supreme Court nominee, Brett Kavanaugh.
Prior to becoming senator, Harris served as California’s attorney general and, before that, as district attorney for San Francisco. She earned a reputation as a tough prosecutor and a strong supporter of equal rights for LGBTQ people.

As the state’s attorney general, Harris strongly opposed Proposition 8, a 2008 ballot measure that banned marriage for same-sex couples in the state. As senator, she has been a strong supporter of pro-LGBTQ positions, co-sponsoring the Equality Act and earning a perfect 100 percent score from the Human Rights Campaign.

But Harris has had her critics in the LGBTQ community, particularly regarding her early opposition to providing gender transition surgery to prison inmates.

Other possible picks
All the potential running mates for Biden were pro-LGBTQ. Susan Rice, former national security advisor to President Obama, was said to be a strong contender alongside Harris. She was was praised by LGBTQ activists in 2011 when, U.S. ambassador to the United Nations, she was a strong advocate for having the United Nations General Assembly restore a reference to “sexual orientation” in a resolution to oppose the killing of vulnerable minority groups.

Rice also helped pass a UN resolution on the human rights of LGBT people, pushed to have several LGBTQ organizations obtain accredited status at the UN and called for the integration of LGBTQ concerns in U.S. foreign diplomacy.
Others believed to have been considered by Biden as a potential running mate included U.S. Rep. Karen Bass of Los Angeles, chair of the Congressional Black Caucus, and U.S. Sens. Elizabeth Warren, another tough competitor for the Democratic presidential nomination this year, Tammy Duckworth of Illinois and Baldwin.

The Times said the Biden campaign “somewhat seriously” considered Baldwin, the first openly-LGBTQ person elected to the Senate, to be a running mate.

Potential candidates from states with Republican governors — including Warren (Massachussets), Sen. Maggie Hassen (New Hampshire), and U.S. Rep. Val Deming (Florida) — all started with a strike against them. If they won the national office, their seats in Congress would be chosen by the Republican governors of their states.

Baldwin didn’t have that problem. Wisconsin’s governor is a Democrat. But Baldwin’s appeal on the vice presidential short list likely came from the fact that she represents a key electoral swing state — Wisconsin — and, like Harris, is considered
both moderate and liberal.

“But Baldwin is relatively little known nationally, and many Democrats might object to an all-white ticket,” noted the Times profile.

In addition to a racial and gender balance on the ticket, Biden almost certainly considered age. The former vice president is 77 and frequently scrutinized for signs of aging and cognitive decline, as is incumbent President Trump, 74. Warren of Massachusetts, another strong contender for the Democratic presidential nomination who was considered a top choice for vice president, is 71.

Meanwhile, the Democratic National Committee announced Aug. 11 that Baldwin and Buttigieg will both speak to the national convention audience on Thursday, Aug. 20, the evening Biden will deliver his nomination acceptance speech.
Because of the coronavirus pandemic, the political parties will not stage their usual in-person conventions but a hybrid to include some in-person gatherings and prime-time speeches on national television and through various social media.
Democrats meet Aug. 17-20. The Democrats’ LGBTQ Caucus is slated to meet Aug. 18.