EBJ: I will step down 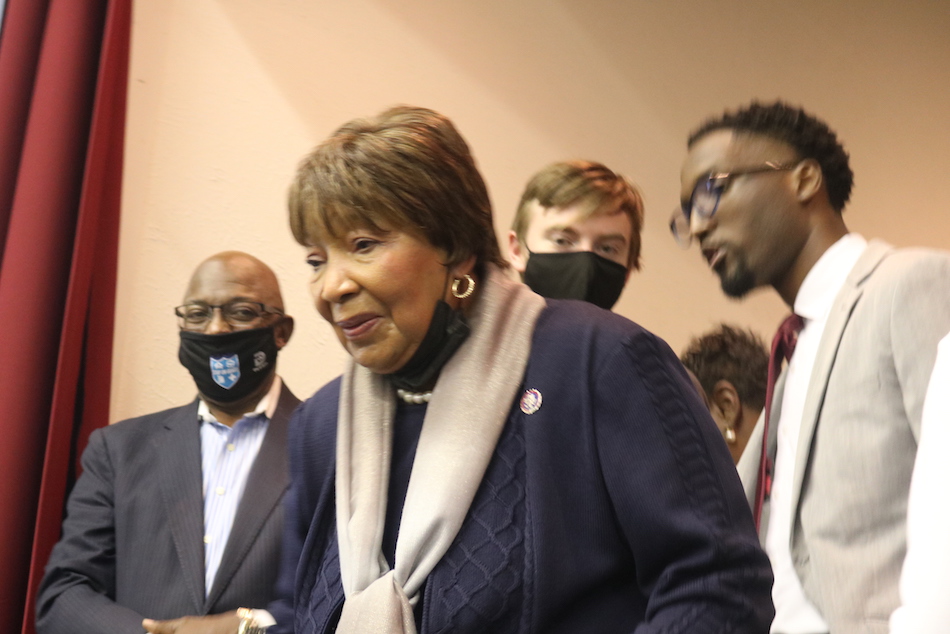 EBJ greeting supporters from the stage following her announcement that she will retire. (David Taffet/Dallas Voice)

Rep. Eddie Bernice Johnson announced she will complete her term in office and will not run for re-election in 2022.

She made the announcement surrounded by her family in front of hundreds of supporters at Kirkwood Temple in Oak Cliff.

“Nothing has been more overwhelming than the heartwarming support for me to run one more time,” Johnson said.

Johnson was first elected to the U.S. House of Representatives in 1992, exactly 20 years after her first election victory to a seat in the Texas House of Representatives. She became the first African American woman ever elected to any office in Dallas County. During her terms in office in the Texas House, she became the first woman to chair a committee.

She left the Legislature for a position in the Carter Administration and returned to public office winning a seat in the state Senate.

In the Legislature Johnson chaired the redistricting committee and called it, “the worst job I ever had.”

Johnson called her years in the U.S. House of Representatives “challenging times, but that comes with the territory.” This term, she became chair of the Science, Space and Technology Committee.

Among her accomplishments, Johnson listed DART as her number one priority that she said she began working on from “the day I got there.” She said she’s directed millions to Dallas area transit but has lost count how much. Union Station in downtown Dallas has been renamed for her in recognition of her work on behalf of the agency.

Johnson became a friend of the LGBTQ community early in her career. Her term in a state Senate began early during the AIDS crisis. While other legislators were introducing bills to put all gay men under quarantine or in internment camps, she came to leaders of the LGBTQ community and asked what the community needed. She understood the needs of people living with HIV and her nursing background gave her credibility among other Senators. Her legislation that helped people with AIDS receive care was the first AIDS legislation to pass in Texas.

After thanking her colleagues — even Republicans about whom she said, “there are sane ones who helped me be successful” and “I respected my colleagues because they respected me” — she said, “I am pleased to announce my retirement.”

To an audience that began shouting, “We love you,” Johnson said she still has almost a year and a half left in office and “I will do my best during that time.”

She said she would announce an endorsement and said she hoped to support a woman as her replacement in the next election.