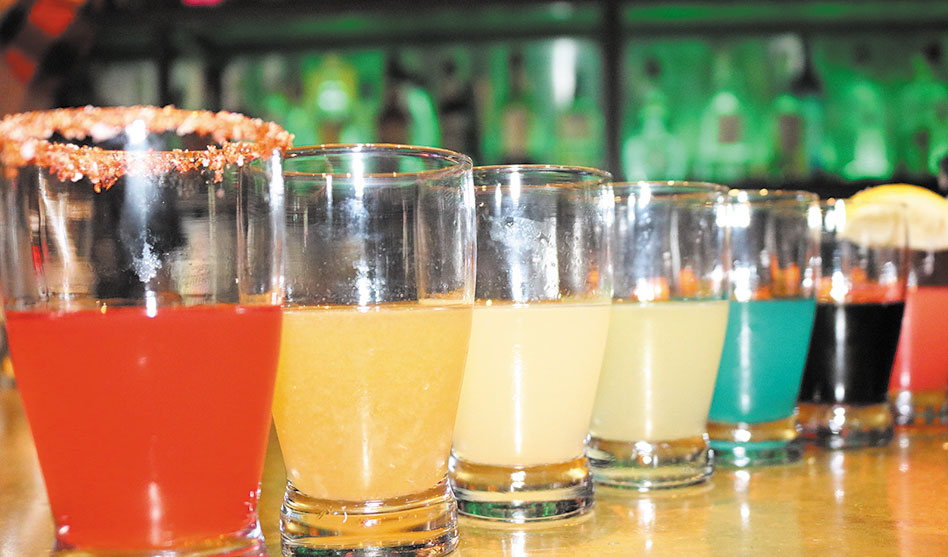 A friend who had his gay card punched years ago admitted sheepishly that it was just last week he figured out why Roy G’s, the newest bar and restaurant on The Strip, was called Roy G’s. If you’re similarly puzzled, it stands for ROY G BIV, the mnemonic for remembering the color spectrum (red-orange-yellow-green-blue-indigo-violet… though in the Pride flag those last two are melded into just purple).

So it’s totally in keeping with its namesake that the menu includes a shot list of seven concoctions (they do the entire rainbow, not just the Pride flag), each named for a color, but inspired by a traditional full-sized cocktail. Bar manager Cody Riggs devised the recipes for the half-dozen-plus drinks, highlighting one of the five major liquors (vodka, gin, whiskey, rum and tequila) throughout the rainbow. “We wanted to keep the dive-bar [theme], but also provide something classic” and enjoyable, solo or with a group, Riggs says. (All the syrups and juices are made in-house, he stresses.)

In honor of Pride Month, here is our rundown of the rainbow.

O(range). Riggs’ personal liquor of choice is bourbon, so he’s especially fond of this variation on the modern Gold Rush cocktail. Like a good whiskey, this shot is eminently sippable, though smooth enough to pound down. Bourbon, honey, orange and lime juice.

Y(ellow). Imagine a Lemon Drop, turned into a sweet Southern shot with the one-two of soft peach and tangy ginger battling it out on your tastebuds. Vodka, peach liqueur, ginger-honey, lemon juice.

G(reen). The presence of cucumber and mint keys you into recognizing this is a take on the Eastside cocktail. It’s the perfect shot for people who don’t think they like gin, Riggs says. It will fool you into loving it. Gin, simple syrup, mint, cucumber, lime juice.

B(lue). One of two recipes that are more club drinks than traditional cocktails, the presence of coconut rum tells you what to expect from this sweet sorority-girl staple,  Coconut rum, blue curacao, pineapple juice.
I(indigo). The second club drink is a version of the Purple Gekko. It’s basically a “reverse” tequila shot: Do the sugared lemon wedge first, then take the shot; trust us. Tequila, blue curacao, grenadine, lemon wedge.