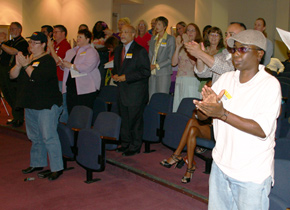 STANDING UP FOR EQUALITY | Spectators give the DART board a standing ovation on Tuesday, June 22, after the board voted unanimously to adopt a policy change extending nondiscrimination protections to its transgender workers. (John Wright/Dallas Voice)

After removing a one-word amendment that would have gutted the proposal, Dallas Area Rapid Transit’s Board of Directors voted unanimously Tuesday, June 22, to add transgender protections to the agency’s employment nondiscrimination policy.

The vote came after about 10 LGBT leaders addressed the DART board, with dozens more looking on from the audience in the local community’s largest turnout for a public meeting since Fort Worth City Council meetings held in the wake of the Rainbow Lounge raid last year.

LGBT speakers demanded that the DART board approve the new policy after removing the amendment, which consisted of the word “except” and was added a week earlier in an apparent attempt by some DART officials to dilute the proposed trans protections.

“A word is standing between us, and the word is ‘except,’” Stonewall Democrats of Dallas President Erin Moore told the DART board, adding that everyone has a sexual orientation and a gender identity. “All of these things also include you. Why not include us?”

Following the 30-minute public comment period, DART board member William Tsao of Dallas made a motion to approve the policy, minus the one-word amendment. “It is the intention of the DART board to make clear that its policy unequivocally prohibits any discrimination against persons based on their gender identity or gender expression,” Tsao said in making his motion, which was seconded by board member Faye Wilkins of Dallas.

The board’s unanimous vote in favor of Tsao’s motion drew a standing ovation from the audience. Two DART board members who voted against trans protections last week, Scott Carlson of Dallas and Mark Enoch of Rowlett, were absent from this week’s meeting.

DART board member Claude Williams of Dallas, an LGBT ally who’s accused the agency’s attorneys of duping the board into the amendment, said later he was “thrilled and overjoyed” with this week’s corrective vote. “It’s been a humungous effort,” Williams said.

Board member Loretta Ellerbe of Plano said she supported the addition of trans protections all along. “It was the right thing to do,” she said after the meeting.

Ray Noah, who proposed the one-word amendment last week, denied that he intended to gut the trans protections, saying he just thought the language of the policy was confusing.

“I didn’t think it was clear enough,” he said.

Noah acknowledged he told The Dallas Morning News he believes DART should retain the right to discriminate in some cases. Noah also denied opposing the addition of sexual orientation to DART’s nondiscrimination policy in 1995, despite clear evidence that he vocally did so.

Tuesday’s vote capped a months-long process that began in February when Dallas Voice reported on alleged discrimination by DART against a transgender bus driver. The proposal to add trans protections, spearheaded by officials at Resource Center Dallas, cleared one DART committee unanimously in April.

In late May, the DART board’s Committee of the Whole tabled the proposal to seek more information about the definition of gender identity, which they later said the agency’s attorneys were unable to provide.

Finally, following a 30-minute closed-door session on June 15, the board hastily amended the proposal to say the agency wouldn’t discriminate based on sexual orientation or gender identity, “except to the extent permitted by federal and/or Texas law.”

Because there are no state or federal protections for LGBT workers, legal experts said this amendment would have effectively gutted the trans protections — and rescinded the sexual orientation protections from 15 years ago.

Even after Tuesday’s removal of the word “except,” some said they still had concerns about the final language. Resource Center officials said they intend to work with DART on rewording the policy, in addition to discussing its implementation in the form of diversity training.

Ken Upton, a senior staff attorney at Lambda Legal in Dallas, said the language of the policy is not ideal but that the removal of the word “except” remedied his main concern.

“It now basically says unless federal or state law prohibits them from doing so —which they do not — their policy is not to discriminate because of any of the enumerated characteristics or identity traits,” Upton said. “Could you improve it? Yes, but it is still a win that was worth fighting for.” To watch video, go to https://tinyurl.com/2e384vm This article appeared in the Dallas Voice print edition June 25, 2010.