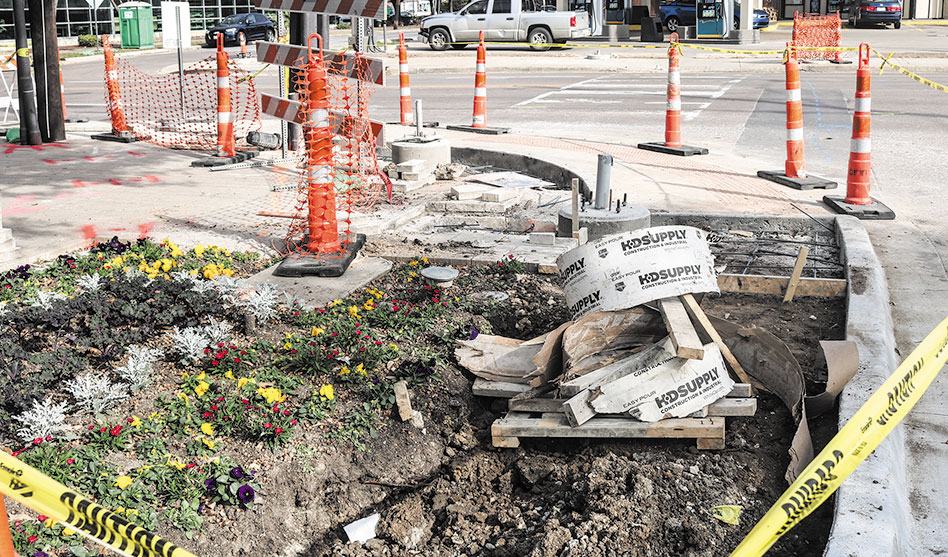 Top: New traffic lights are being installed on the corner of Knight Street on Cedar Springs Road to slow traffic on the Strip and make the intersection safer for pedestrians. (David Taffet/Dallas Voice)

Upgrades and beautification are meant to attract new business, slow down traffic for safety

Construction intended to beautify the area and make it safer has begun on Cedar Springs Road. Some of the specifications of upgrades are meant to slow traffic and attract more business to the area.

The delay in construction has been due to different proposals by local businesses, residents and the city. At one point, the city drew up plans to narrow Cedar Springs to one lane in each direction. That’s something that’s worked in other entertainment districts, like Bishop Arts and Lower Greenville. But on Cedar Springs Road, it would have halted traffic every day as beer trucks made their deliveries to the many bars along the street. 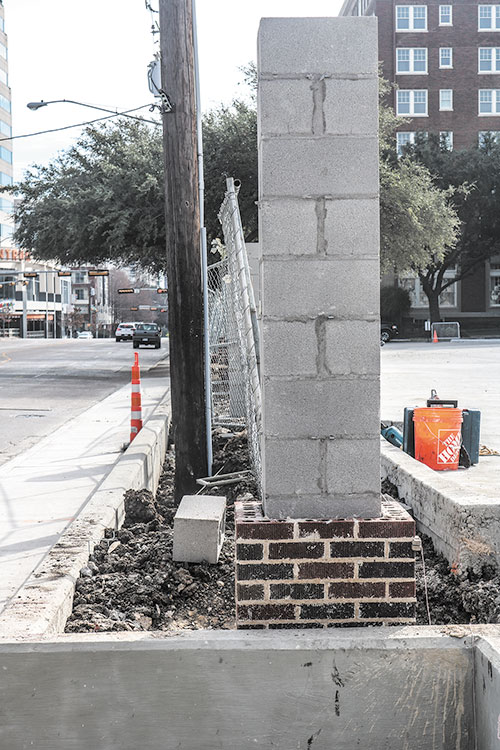 After years of back and forth, a design was approved earlier this year, and construction has begun. A traffic light is being added at the corner of Knight Street and Cedar Springs. Several fatal accidents have occurred at that corner, and near misses continue to occur as cars race through the flashing pedestrian lights.

Because there’s a jog in the street at that corner, each of the four corners has been dug up, and the bases for traffic light poles have been poured. New handicap-accessible sidewalks are being installed, and brick will be incorporated into the design.

At Reagan Street and elsewhere along Cedar Springs Road, cutouts are meant to slow traffic by narrowing the street. Landscaping will be added, which also tends to slow traffic. Brick will be used in the design to beautify the crossing.

Entrance gates to the district will be placed where Cedar Springs intersects Oak Lawn Avenue and where it intersects Douglas Avenue to mark the district.

The last design element that will be added — and an indication construction is coming to an end — will be the rainbow crosswalks.

The crosswalks will be maintained by the North Texas LGBT Chamber of Commerce and are being privately funded in a campaign headed by former Dallas City Councilman Chris Luna.

In a lot behind the Melrose Hotel, a mid-rise addition to the hotel has been postponed a number of times but is now on hold. The lot that formerly housed a vintage 1920s building that was home to the restaurant The Bronx for decades has been paved. The new parking lot will be surrounded by a fence built in a style to match the hotel’s architecture. 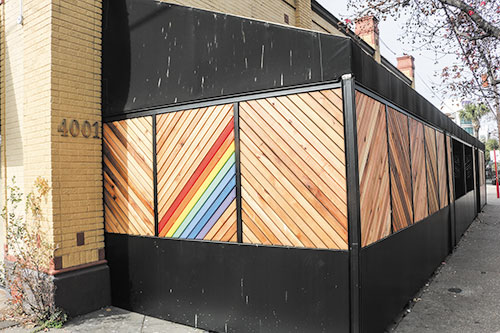 Roy G’s is taking shape at the Crossroads.

And up the street, a new restaurant is taking shape. Roy G’s — after the acronym for remember the order of the colors of the rainbow — features rainbow colors. The bar/cafe is being developed and will be run by members of the Street family, pioneers who helped turn a run-down Cedar Springs Road into the gayborhood in the 1970s with their original Black-eyed Pea restaurant.