Elections, Halloween and returning to the stage

Hello world. By the time you are reading this, I am hoping that there is a new president-elect (UPDATE: There is), and things are starting to calm down. I haven’t wanted to get my hopes up because we have been burned before. I will say that my mother … VOTED FOR BIDEN!

Y’all, that is such a big deal to me. She broke my heart four years ago because she voted Republican and couldn’t see past the word “Republican.” When she told me she voted for Biden, I cried. I’m tearing up now thinking about it.

I hope as you are reading this, your hearts and minds are lighter than they were four years ago — I know mine are.

I also hope you all had a good Halloween, even though fucking COVID kept it from being a great Halloween. Halloween was on a Saturday, with a full moon, during time change — a whole extra hour to be out and party. It was going to be such a great night out. But nooooo! Freakin’ pandemic! So annoying.

I’m bitching because I am slightly annoyed, but truth is, I totally understand. Jesus be a vaccine. 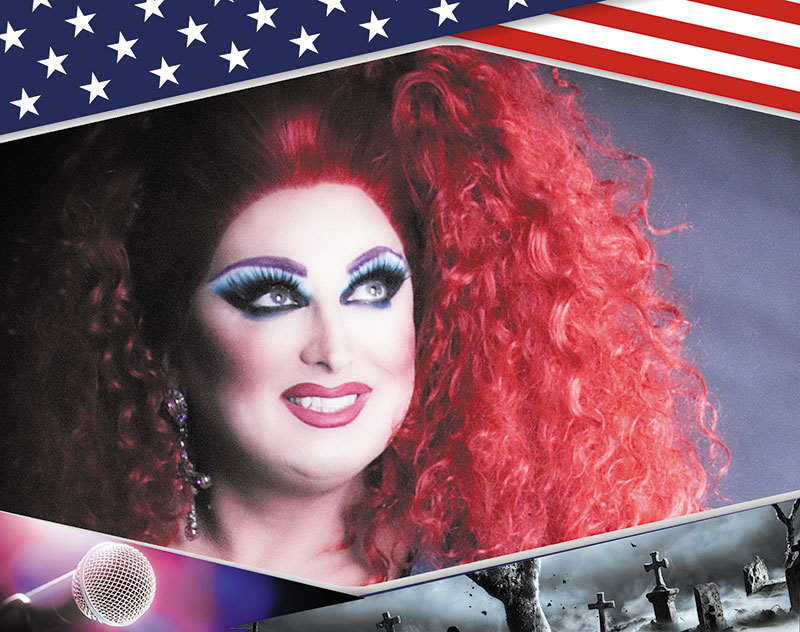 I actually just remembered something: I did half drag when I was 11 years old. I completely forgot about that until this week when I was looking online for some costume ideas and came across a girl who did the half guy/half girl costume. I thought, “Oh fuck! I did that years ago.”

It was very last minute, and I needed a costume for something; I think it was a church event I was going to with my best friend’s family. His mom gave me a skirt that I tucked into half of my jeans, then she pinned a blouse to half of my shirt. A half-stippled beard and some eyeliner and lipstick later, and I was James/Jamie.

The costume sucked but when you are poor AF, you takes whatcha gets.

What I really remember about that night was that we had fun, even though I kept having to retuck my skirt into my jeans and my beard and eyeliner make-up were not waterproof and washed off while I was bobbing for apples. (Yes, we bobbed for apples. I see that now as early practice for all the “bobbing” I would be doing later in life.)

Oh my God, y’all! I got to be onstage again, and it was awesome. The Saturday before Halloween, the Rose Room girls and a few others did a show at the Annette Straus Square outdoor theater at the AT&T Performing Arts Center. It was really cool; between the huge stage and the fancy dressing rooms we all felt like rockstars.

As soon as we walked out on stage, I felt like I was recharging my life battery. I have missed performing for a live audience so much that it made me emotional. I got choked up and teared up at least 10 times that night.

I teared up just doing a shot with my girls. We hadn’t done that or even seen each other in so long, and I truly missed those hos.
The entire night was magical for me, I still feel a little bit high from it. But that high does not last long, I need to do it again as soon as possible. Cure COVID, dammit, and bring back my Rose Room!

So the husband and I had a date night recently. We went to the movies. Yes, one of the few theaters actually still open (for now). It is horrifying seeing so many movie theaters closing down, but with most new releases getting pushed back over and over again, what choice do they have?

We went and saw the original Nightmare on Elm Street. I saw it in the theater when I was a kid with my dad and sister, and I have always loved it. It was cool to see it on the big screen again.

After the movie, my husband tells me that he has never watched the super homoerotic sequel, Freddy’s Revenge. So as soon as we got home that night, we found it on YouTube and watched it. Of course, just as I remembered, it was awful. But sometimes awful is just so much fun to watch.

Then Freddy’s spirit or ghost or whatever starts hurling balls of all sizes — tennis balls to medicine balls — at the coach’s face. Then jump ropes tie him up in the shower; his clothes are ripped away by an invisible presence, and towels snap on his naked ass making his cheeks turn red. SM at its finest — until he is killed by Freddy’s invisible glove cutting up his back in a bloody mess.
All this while the lead guy screams like a little bitch. It was hilarious. So bad but so good.

A few days later, while still on a Freddy kick, I insisted we watch part 3, Dream Warriors. That is how a sequel should be; I loved that movie. It featured a young Lawrence Fishburne and Patricia Arquette and some really fun kick-ass characters. There really is nothing like the movies that you watched as a teen.

Okay I think I am through babbling on and on about nothing. Who am I, anyway? Seinfeld? Remember to always love more, bitch less and be fabulous! XOXO, Cassie Nova