A ‘Sordid’ experience and ‘Squid’ dreams

Hello beautiful people. I woke up today with so much on my mind that this will be another episode of brain vomit. I apologize in advance. First off, I woke up feeling thankful. Last week we finished our last showing of

A Very Sordid Wedding at the Kalita Humphreys Theater. I’ve been on stage for most of my life, but I had never done theater before. It’s a completely different kind of show than what I am used to. Even though my part was small, rehearsals and shows took up most of my September. 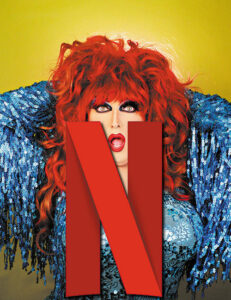 I can’t thank Del Shores enough for writing Cassie Nova and the Rose Room into the Sordid world that he has created. It is an absolute honor, and I can’t wait to see this play in other cities because I am dying to see who they get to play the part of Cassie Nova.

I just thought of something: Am I technically acting if I am playing myself?

In all seriousness, the cast that Uptown Players got for this show was amazing. I would sit in the theater seats night after night as this show came together and just be amazed every time. If you know the story, you know it is funny as hell, but at times it is also quite emotional — especially for a gay man in the South who struggled with religion and family.

Latrelle, played beautifully by Ivy Opdyke, reminds me so much of my mother, and she moved me to tears every time she did her sermon in the church. If you know, you know. When she says the line “We have to stop villainizing our children” — it moves me every time. I get that lump in my throat when you wanna cry but also don’t want to miss a moment of what she has to say, so you hold it in as you hold your breath. I have a visceral reaction to her performance and the words that my friend Del wrote. Even as I sit here writing this, I am tearing up. God, I am getting soft in my old age.

My small part in the play has made a large impact on me, and my appreciation for stage actors — hell, all theater folk — has grown immensely. Whether they were onstage, backstage or in the booth, the cast and crew were amazing and so much fun. I feel truly blessed to have had this experience.

Secondly this week — and this is where it is gonna get weird — I wanna tell y’all about my dream the other night. You know how when you have a dream or nightmare, the second you wake up it starts to fade out of your memory? Not this one! The moment I woke up, I started to write down the details I remembered because it was so bizarre and disturbing that I didn’t want to forget any of it. Here it is:

So, there is a show on Netflix called Squid Games. It is a Korean series about a group of people chosen to play a game. They are all in financial ruin and are eager to play because of the large prize cache. They quickly learn that if you lose the game, you are shot and killed.

It is such a messed-up show. I am only a few episodes in right now, but I am hooked.

It must have been on my mind when I went to bed because I dreamed that I and my group of close friends were on the American version of the show. It took place on the ice rink at the Galleria, and I was chosen to play the first game. I had to climb a rope from the ground level to the fourth floor. I was only able to make it to the third floor, so they cut off my pinky finger. (Full disclosure: In real life I doubt I would make it up three feet.)

The next game is a little cloudy in my memory, but two people had their left arm cut off when they didn’t complete the task. Then somehow, I am five or six stories over a beach, and the players have to run from one end of the beach through the knee-deep water to the other end where a finish line was flapping in the breeze.

As soon as they yelled “Go,” they released three giant chickens. These chickens were probably 30 feet high — big-ass chickens. The chickens immediately started to peck the players to death, ripping them into pieces. There was blood and body parts everywhere as the water turned red and people ran for their lives.

I have a vivid memory of a chicken holding my friend Marc in his beak and shaking its head back and forth like some crazed predatory K-9. It was so disturbing. Those chickens were relentless and killed half of the players.

The next game gave the players an option to not participate if they were women. So, most of my friends that were left opted out by having a brutal sex change surgery. My friends Justin and Sweet Mark both walked out of the arena with huge implants under their hairy chests and wearing little booty shorts covered in blood.

With five o’clock shadow and big boobs they both were in tears saying they just wanted to survive.

Then I woke up.

What the actual fuck?

Are there any dream interpreters out there reading this? How messed up in the brain am I that this was in my head at all? I apologize to my friends for even putting this out into the universe, but I cannot get that damn dream out of my head. Freaking Squid Games messed me up.

One last thing, watch Midnight Mass on Netflix. It is amazing. It has also set up residency in my head. I can’t stop thinking about it. There is a scene where two of the main characters are sitting on a couch talking about what happens when we die, and it is the one of the most subtle, beautifully-acted scenes ever.

Yes, the show is technically considered a horror drama, but it is so much more than that. The religious tone and use of Bible quotes to fit the storyline is deep and disturbing, but the use of old-school hymns adds something so moving and nostalgic.

The seven-episode series is an incredible work of art. It needs to win awards.

Thanks for reading these spewings from my mind. Remember to always love more, bitch less and be fabulous. XOXO, Cassie Nova