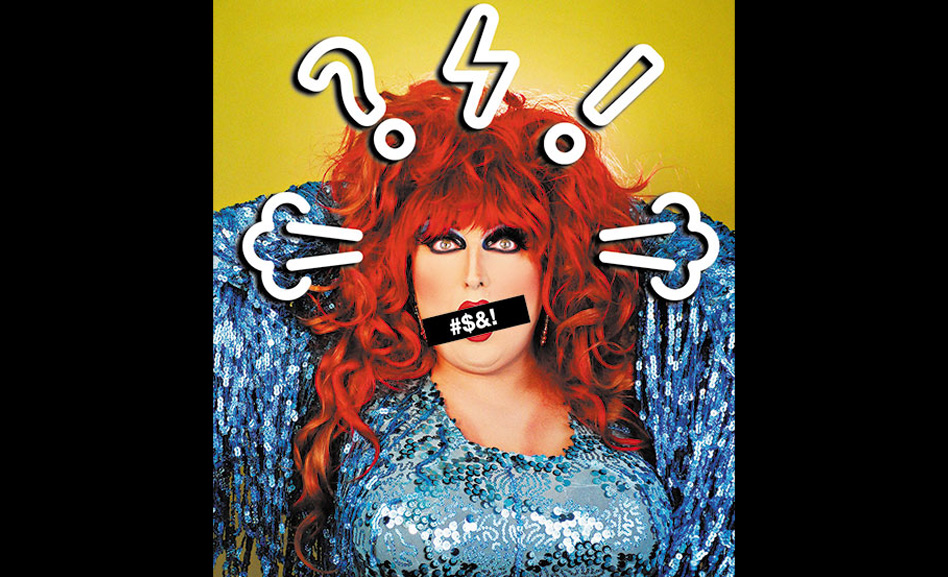 Hello world! Last night I had a show in the Rose Room. It was my regular Friday night gig, and I had a bad night. So I thought I would tell you all about it. You know, showing y’all every aspect of drag, warts and all.

First off, I want to say how truly lucky I am to get to do what I love and get paid for it, but sometimes you just have an off night.

So I was in kind of a neutral mood as the girls went out to perform the opening production. As they are singing — “’cause Ima woman!” — I realize I am starting to run behind. I only have about two minutes before I need to be completely ready and walking out on stage.

I really could have used four minutes — outfit on, earrings on, shoes, wig glued down, perfume on and breath strips in my mouth hole as I am running to bring the girls off stage as the production ends.

I barely had time to look in the mirror, but what I saw looked okay, although I wished I would have had more time to style my hair a little better. It had that fresh fucked look — great look sometimes, but not what I was going for in that moment.

Plus, I was hot, and my wig glue wasn’t quite holding. So I was paranoid that my heavy ass hair was going to be slipping further and further back. I get nervous that when my wig slips back, it makes my forehead look like a movie theater screen, like a fucking Imax screen.

I walk out on stage and greet the crowd, and, immediately, a group to the right of me and a group to the left of me start screaming: “It’s her birthday!” “She’s getting married! Wooooo!”

Of course, straight women that never come to the gay club until they have a bridal or a birthday party, and then they want you to make the entire show about them.

I honestly don’t mind doing a shout out for your birthday or bridal bullshit if you respect the process. But my biggest pet peeve is when they try to hijack the show. I like to tell a few jokes and get my bearings before I announce birthdays and bullshit. My joke is that I will announce anything for $20. Some nights I make serious bank doing that; other nights it does not work. No big deal; I still announce their stuff. I want everyone to have a great time.

But, last night it just hit me weird. Those damn woo-hoo girls zapped every bit of good juju I had, and I went into bitch mode. If I had Carrie’s powers, that room would have looked like her prom!

Every time I would start a conversation with someone in front of me, someone behind me was screaming about their friend’s birthday. I could not get a full sentence out. So frustrating! I ended up having everyone celebrating their birthday stand up — about nine people — and then having the crowd yell, “HAPPY BIRTHDAY BITCH!”

And that was all they got. Fuck ’em.

Then randomly, a skinny guy sitting next to the stage pulled out a few dollar bills to tip me. But as I reached for them, he pulled the money back like he was keeping it, then gave it to me. I read him for filth. That shit is never funny. I cannot name a single performer that thinks that is funny or okay. It is such a dick move. It made my bitch-o-meter go up a notch.

Then I did my number, and that was a complete shit show. I am doing a girl version of the song “Fancy Like” into “Redneck Woman,” and I cannot find anything close to the beat. I have never felt so white.

The shoes I was wearing were cute but way too tight, so I could barely walk let alone dance. Insert “Cassie dances?” joke here.

The music could not end fast enough. I was sweating, and I felt like my wig was sliding all over my head. My feet were cramping up. I hope it wasn’t showing, but I was not enjoying myself.

Y’all, I have been doing drag for, like, 29 years, and I know how to power through a performance. But, last night, I just got so angry at myself for not turning the situation around.

After my number I went backstage, changed wigs and shoes and went back out — and I felt so much better. I had a shot and relaxed for a second standing next to Rocky’s well, behind the velvet rope where I could put my back to the wall and chill. (There is an anxiety in having people around me 360, so putting my back to a wall is very calming.) By the end of the next entertainer’s number, I was great.

I think the point to this story is that I shouldn’t rush. I’d rather be an hour early than 10 minutes late. I need time to process and enjoy the moment. I’m sure that is something that we all need to do.

Luckily, the great nights outweigh the shit ones for me. Nobody is always gonna be 100 percent happy with everything all the time. Learn from it; process it, and try not to let it happen again. But if it does, don’t beat yourself up for it.

As that Frozen blonde bitch says, Let it go!