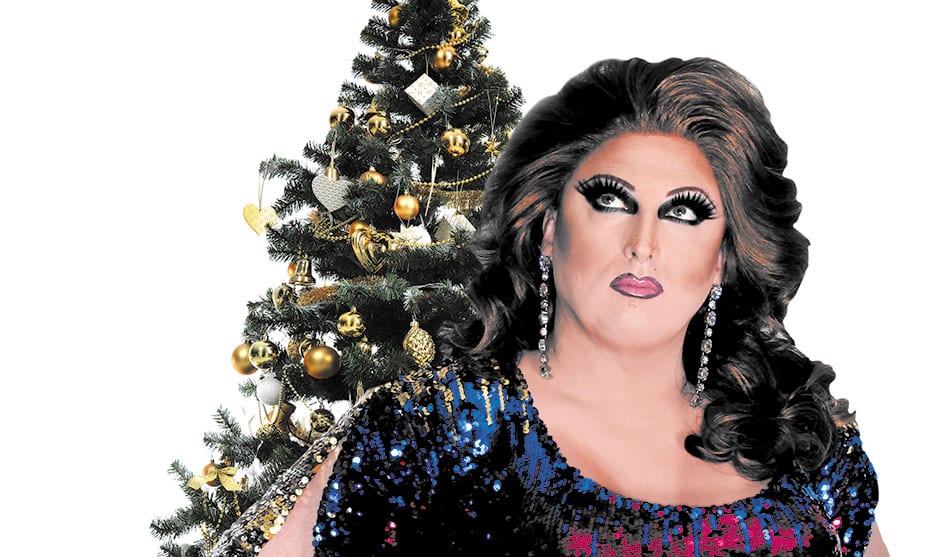 Hello all. With Christmas coming up and lots of holiday parties to go to, I thought I would give y’all a few pointers on how to attend one of your fabulous events without bloodshed or casualties.

The reason I feel this is an important topic right now is because of something that happened at my Freakshow last week at JR.’s. I started the show as I normally do — I just walk onstage and start talking. There was a large group around the stage, so I thought it was going to be a great night. I had barely gotten out the words. “Welcome, everyone!” when a member of this group shouted, “Thank you, next!” I know that is an Arianna Grande song, but I knew what this little bitch was saying. I ignored it and went on to talk about Arianna’s break up with poor, big-dicked Pete Davidson. That idiot has been through some shit.

I continued doing my job and engaging people in the audience. I found out that this large group of non-regulars had just left their company’s Christmas party and were not ready for that party to stop, so they came to JR.’s… awesome. Most of the group were having fun, going with the flow and just enjoying themselves. But there was one guy, much older than everyone else and wearing a very festive Christmas suit, who stood directly in front of the stage and engaged in a very loud conversation with a drag queen about how horrible he thought I was.

I stopped talking so we could all hear his convo: “I hate her, she’s horrible, her hair looks like a rat’s nest, she’s ugly.” I just stood there and let him rant on. The queen he was talking to looked mortified but not sure about what to do about it. The people who work with the Christmas-suit-guy tried to get him to stop talking and realized that the entire room was listening to him as he very loudly professed his hate for me. But Papa Noel loudmouth was not having it — he wasn’t finished.

For the record, my feelings were never hurt. I have a thick skin, and seriously, I looked damn good that night. My hair was fresh and fabulous. My corset was cinched just right so my thickness looked amazing. My dress was new and looked luxe. Bitch, even my makeup was on point. I looked like a big, badass supermodel with a touch of Pennywise. And though my ego ain’t always my amigo, we was friends that night. My self-confidence was not going to be diminished by some boob talking shit about me.

I finally thought to defuse the whole situation and try to get him on my side — you know, “enemies closer” kind of stuff. I asked if I could buy him a shot and we could put this whole ugliness behind us, because I was not completely innocent in this situation. I made a few awful, petty jokes at him, so I figured, let’s do a shot together and get past this and move on with the show.

He basically said sure, buy me a shot, rolling his eyes and being dismissive. Before I could say anything else, one of his friends, who turned out to be the general manager of the restaurant they all worked at, said in a slur, ”You gotta buy me a shot, too!” I said, no I don’t, and that her friend was still being a dick, so I wasn’t buying a shot for anyone. She said, “I thought that was what your kind liked: Dick!” I am paraphrasing — what she actually said was worse.

At that point, I was done with the whole situation. I was ready to just move on with the show and not feed into their energy. Now I was pissed off. No jokes, no niceties, just moving on. That’s when Christmas suit jumped onstage and demanded the shot I said I was gonna buy him. Within seconds, security had him outside and made him leave, along with his general manager. The next 10 minutes consisted of Christmas-suit-guy’s co-workers apologizing and offering to buy me shots. A few minutes and a few shots later, we were all having fun again.

So that brings me to Christmas party etiquette. Do not drink so much at your work event that things are going to be awkward next time you go in for your shift. No one wants to be out of a job right before Christmas because you got drunk and offered to blow your co-workers.

If you are going to a white elephant party — where everyone brings a gift and y’all take turns stealing the good gifts from others — make sure you put a little thought and heart into the gift so the game will be fun. I went to one where some asshole basically wrapped a half used roll of toilet paper as his gift. Somebody ended up with that gift, and I guarantee you that unless he had to shit right at that moment, he’d be pissed he picked your gift. It’s more fun when people are fighting over the gift you bring. (I am going to a white elephant party this Thursday. I am bringing a beautifully-wrapped 12-inch dildo, complete with a suction cup on the end. If I know my friends, there will be a lot of stealing that night. But know your audience. my friends won’t be offended or embarrassed by that gift; they are all freaks.) Let’s say your friends are uptight; bring a nice purple, stuffed sloth from Five Below or a gift card to Which Wich. You can’t go wrong with a cute stuffed animal or a sammie. Or candles — we could all use just one more fucking candle.

Always take the host of the party a gift like a bottle of wine. I love when months after we’ve had a party I realize we have a great bottle of wine to drink on some random Tuesday. Or a candle, another fucking candle.

Use good judgment at all of your parties… or don’t. Some of the best parties are when you use horrible judgment and end up having a blast. Just don’t be a dick. If you can’t party without being a jerk, people will stop inviting you altogether. And nobody wants that.