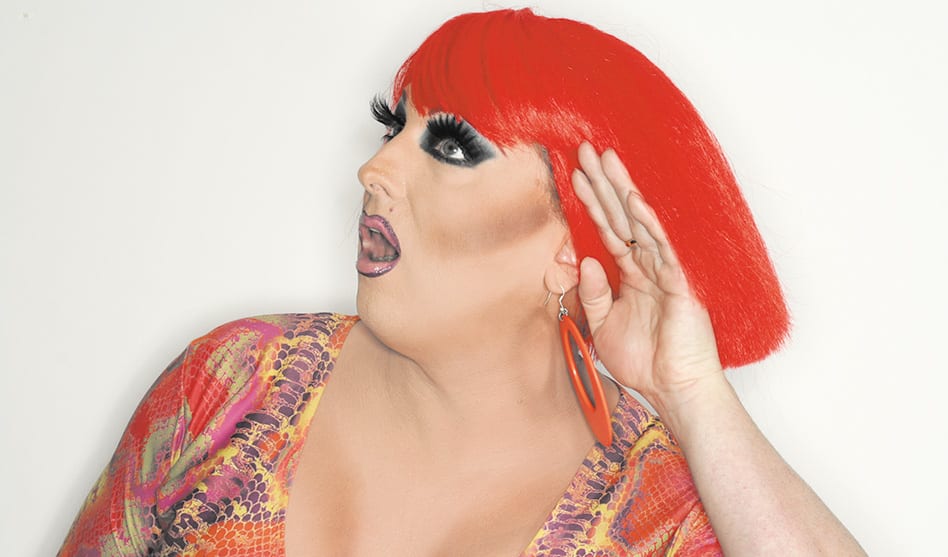 Happy fall, y’all. This is my favorite time of year: It’s cool enough to make a fire in the backyard pit and drink wine til you are goofy. Seriously, that is my absolute favorite thing to do right now. There is nothing like fire, wine and a 5:30 sunset.

If you have ever been to one of my shows or know me, you know I shake. I always have. I remember being in junior high and a kid making fun of me for shaking. My sister shakes, my mother shakes, and I even remember my pawpaw vibrating a little. My doctor called it a familial tremor and said it may get worse as I get older, but there is really nothing I can do about it, except cut out caffeine and alcohol to see if that helps.

I quit drinking for a solid year a few years ago — partially to help with the shaking and partially to prove to myself that I am not a raging alcoholic. During that year, I also cut way back on caffeine, but my shakes never went away. By the way, that year was awful. I’m already moody — imagine me sober and moody. Ouch!

Years ago one doctor told me I could try a low dose of Valium to help with the shaking, but that would probably only help a little; I said no thanks. To be honest, I only really notice the shaking when someone else comments on it. I used to freak out thinking everyone will think I was on drugs… then when I was on drugs, I didn’t care what they thought. Funny how that works.

I just figure it is who I am. I can’t do anything about it, so fuck it. I’m not saying I don’t get self-conscious because I do, but I’m hoping that by writing about it, I can just own it. Adrenaline can really exacerbate the shaking, so usually at the beginning of the show I basically vibrate. If we open the show with a big production and then I emcee, that is when my shaking is the absolute worst. So last Saturday night, that is exactly what happened.

We opened the show with a Spice Girls production. It’s super cute with actual choreography. Everyone who knows me knows I am a dancer. Not! I can hold my own, but sometimes it feels like I am doing full cardio before I have to talk on the microphone. So my adrenaline is way up. Excitement, nerves, being anxious to get the choreography right, all add fuel to my vibrating super power.

After the production, I do what I do best: Mess with some straight people. I usually single out a cute straight guy and make sure he remembers the night he went and played with the gays. I always buy them a shot so we can toast onstage. On this night, I damn near poured his shot on the floor I was shaking so badly. I knew it was very obvious I was shaking but literally shook it off. We toasted, drank our shots, and I continued the show. The crowd was incredible that night, tips were great, the energy was fabulous, and I was loving life.

Until the end of my performance. That’s when a little group of straight girls held up a few dollars to tip me. I make my way over to them and the middle chic exaggerates shaking as she is handing me a dollar. She was shaking and acting like she had Parkinson’s and just laughing her ass off. I got on the mike and said, “Oh my Gawd, you are so sweet to call out one of the things that I am actually embarrassed by. You must be a wonderful human being. Thank you for making sure everyone saw that I shake. Your parents must be so proud. Bitch!” Hateful and her sisters just laughed.

Now, don’t get it twisted, I get the irony of a bitchy drag queen that basically makes fun of people for a living to get a little of what she dishes out. But when I roast someone I try to make sure they know it comes from a place of fun. If I make fun of you about something, I make fun of myself even more. I wear dresses for a living; I should never be taken seriously.

As the show progressed, I introduced Kofi from Houston. She always puts on a fun show, and last weekend was no exception. During her number, she grabbed a bottle of beer off one of the tables and poured it all over herself. She was in the moment and feeling it. The crowd went crazy as she sloshed her wet wig around. She ripped off her beer soaked hair and threw it towards the stage. It landed on the Mean Girls table and knocked over their drinks. Oh karma, I love you.

After Kofi was done performing, I asked the audience whose beer was it that Kofi “borrowed.” A lady with big blonde hair said it was hers but that it was OK, she would get herself another one. She was obviously having a great time. I said, “No I will get you a beer, no problem. What were you drinking?” Before she could even answer, Miss Mock Shaker was screaming from behind me: ”I need a new drink, too!” I turned to her with my finger shaking back and forth even more dramatically than she was doing, and said, “No, no, no!” It was a full circle moment and made my petty heart grow three sizes.

I am Cassie Nova — shaking not stirred!

Now to solve a problem.

Dear Cassie, With the holidays coming up, do you have any advice on how to deal with family members that always want to argue politics or current events? I hate that I always leave my family engagements pissed off and exhausted like I have just been on trial. Thank you for all you do. Bob.

Hey Bob, First off: Alcohol and lots of it. That is a joke, the last thing I need is to be drinking around family. Then I will argue with a wall… which is usually what you are doing when talking politics with someone that has different views from you. Let’s be honest, there is nothing they can say to change your mind, and if someone is willing to listen, there probably will be no argument at all.

I have a list of topics ready for discussion way before I get to a family function — subjects that don’t go near politics, kneeling during the National Anthem, Blake Shelton or gay stuff. I ask things like, “Did you watch Stranger Things? Did you know Midlothian is getting a new Kroger and a Panda Express? Can you believe so-and-so got voted out on Survivor? Isn’t her baby adorable? Have you seen Thor?” (Be careful with that last one because I always end up commenting on Thor’s haircut and how he is still hot as balls.) Also the ever reliable, “Boy… how ’bout this weather?”

Lighthearted and fun always beat out stressed and pissed off, so tread lightly this holiday season.

If you have a question of comment, email it to AskCassieNova@gmail.com.