Out-running the zombies — or not

Hello to all of my fabulous freaks. I hope you are having a great day. I hate to say it but I am still thinking about Halloween while all of the people around me are already singing Christmas music. In a way, I am Halloween-centric all year long. I dress up; I eat candy, and it doesn’t need to be October for me to wanna watch a horror movie or read scary stories.

This past Halloween was one for the record books. Between the Block Party and Halloween night and all the spooky in between, I was wore the fuck out. The night of the Block Party, I pre-gamed at my friend Ross’s party, got dressed up as a fishy female Pennywise, hosted the costume parade out on the street, hosted and performed in the Rose Room, went back to Ross’s and partied a little more, then finally made it home to bed right before the sun came up. 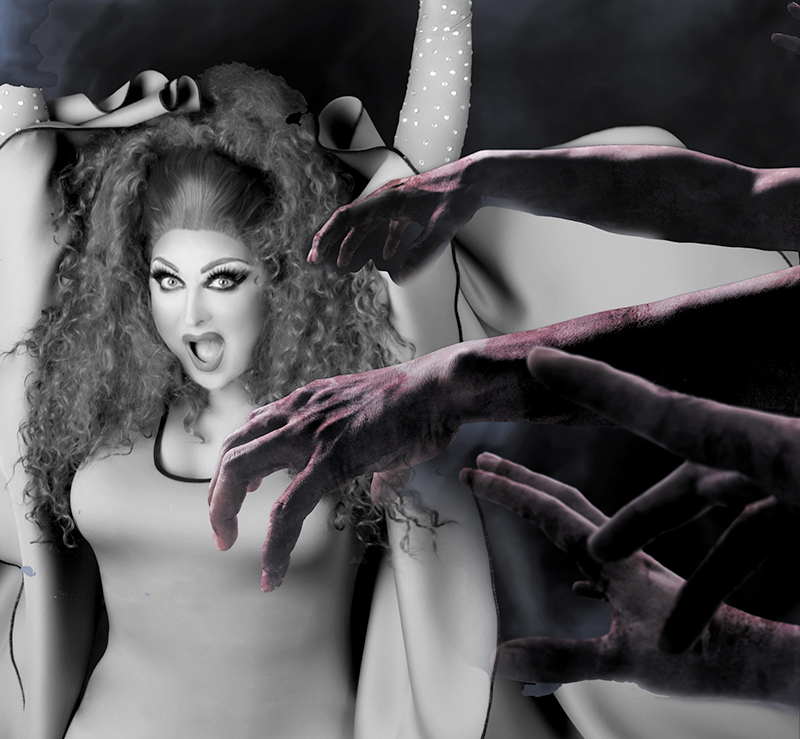 Even though I am probably getting too old for that kind of night, I figured I will rest when I’m dead. Life is too short not to enjoy as much of it as possible.

I have the best group of friends, and they take Halloween very seriously. If you don’t believe me, check my Facebook and look at my background photo. We all killed it. Between Raquel’s freaky vagina eye make-up, to Jeremy’s rodeo clown (complete with barrel), to Justin’s demon warrior in full armor, Josh’s creepy wooden dummy complete with strings and an incredible dead-on Raquel Blake illusionist … the creativity was through the roof.

One of my favorite moments was when my inebriated husband, who was dressed as Jesus, asked if I would like him to “take the wheel” on the drive home. The entire night was full of those small, hilarious moments that just kept you feeling good. I know how lucky I am to have such a great group of weirdoes to hang out with.

In the scary movie department, though, I was kind of disappointed this year. I watched a few scary movies on cable or Netflix that I just hated. There is nothing worse than a horror movie rated PG-13. I will only watch horror movies rated R or MA from now on.

I am hoping that the movie Doctor Sleep has the creep factor I am always looking for.

If you get a chance to see The Dead Don’t Die In Dallas, you definitely should watch — mostly so you can see my dick fall off just before I get killed in such a fabulously ridiculous way. My entire scene is about a minute long. If you hate Cassie Nova, you will love this movie.

(Do not get it confused with The Dead Don’t Die with Bill Murray and the guy that played Kylo Ren. That movie fucking sucked. I’m still mad about it.)

I did spend part of October finishing one of my all-time favorite graphic novel/comic books, The Walking Dead. I started the comic books about two years before the television series premiered. But first, let me share a little back story about me and zombies:

When I was a kid my dad would take me to the movies with him all the time. It didn’t matter what it was rated, he took me along. Gore, nudity, sex — I saw it all by the time I was 7 or 8. Hey, it was a different time!

He took me to see a double feature of Dawn of the Dead and Day of the Dead when I was 10 or 11 years old, and those movies scared the shit out of me. I hated zombie movies when I was a kid because the endings were always so depressing. Zombie movies never had a happy ending — or even a glimmer of hope. I couldn’t stop thinking about zombies. I started to have nightmares about zombies chasing me and busting into my bedroom to eat me.

Every time a new zombie movie would come out at the theater or on VHS, we would always see it. Then for weeks after, I would have nightmares. But I still watched them. Zombies have always given me the heebie-jeebies, but it seemed the more I watched the movies, the less I dreamed about them. So I thought I had finally conquered my fear of zombies.

That movie messed me up, because now the fucking zombies didn’t shamble and stumble — they ran!

Now, before any of you nerds start to call me out and say that the 28 Days Later zombies weren’t zombies at all, but regular people infected by the rage virus, I know that. But it still falls under the zombie umbrella to me.

So, between 28 Days Later, the Dawn of the Dead remake and the first Resident Evil movie, I started to have zombie nightmares again. But I was into my 30s by then, so it was ridiculous.

I decided to put a stop to this childish bullshit and get over my ridiculous fear of something that could never actually happen. So I immersed myself into all things zombie: comic books, novels, movies — I didn’t care. I was a zombie for Halloween. Everything ZOMBIE! I guess I liked being a little bit scared.

So I loved the Walking Dead comics, but that’s over now. I finished the last issue last month. I’m sad. I am still a diehard Walking Dead fan. I love the television series almost as much as I loved the comics. I know a lot of people that have lost interest in the show, especially after the whole Negan/Glen thing. But I am still with it.

The past few seasons have been lower in the ratings but have actually been really good seasons. I’m excited about the second spin-off series that starts next year and the Rick Grimes movies that are in production right now.

I know if the zombie apocalypse were to actually happen, I’m pretty sure I would be one of the first to die. I hate to run or use my arms at all, so I’m for sure zombie food.

Who knows? Maybe I would thrive and become a badass? Knowing my fat ass, I’d become a cannibal and start eating people when we started to run out of food. I am a great cook, and people probably taste like chicken, so I’d be the Paula Dean of the zombie apocalypse … but without the butter fried racism.

Only 358 days till next Halloween. Yay!