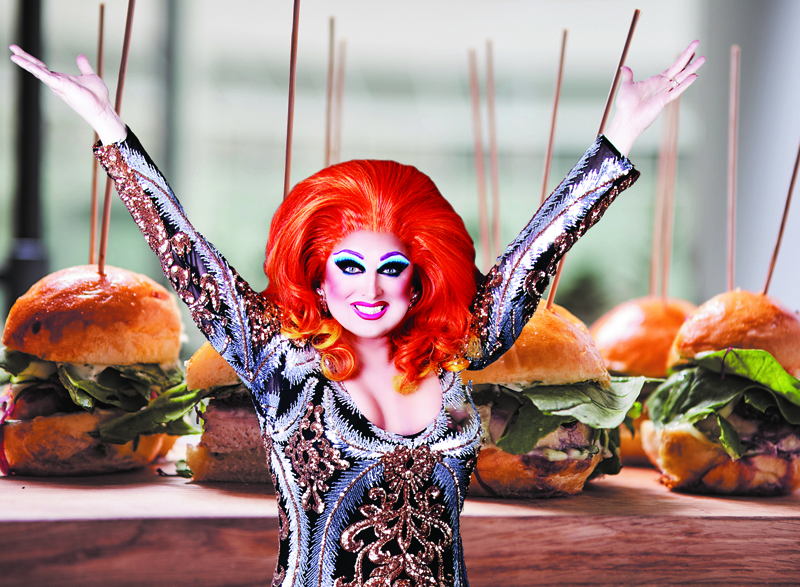 Hello all. I love food. Well, duh! Who doesn’t? I guess I would call myself a foodie. I like to try all kinds of different foods, and I watch too many cooking shows or travel shows where some likeable host gets to travel the globe and eat fabulous looking food. That would be my dream job. But I couldn’t do it in drag; I eat way too manly to not fuck up my lipstick.

I’m on a Middle Eastern food kick right now. Have you tried OPEN SESAME next to Peckers on Oak Lawn? Surprisingly good food. The baba ganoush is fabulous. I do wish they served naan bread instead of pita, but that’s just a personal preference.

There is also a great place in Arlington — almost into Mansfield — called The Istanbul Grill. It’s BYOB, so take a great bottle of wine with you when you go.

I watch so many shows about food that every single one of the vacations we have ever been on, we hit up at least one of the restaurants featured in shows I’ve seen on TV — well, only if the food looked really good. One of our first weekend getaways — I wouldn’t really call it a vacation — was to Galveston. We ate at The Spot. They had great burgers and stuff, but the desserts were crazy good.

Our first “real” vacation was to Portland, Maine. I have always wanted to go to Maine, ever since I was a kid, partly because I am such a big Stephen King fan, and partly because it is so completely different from Texas. They have beautiful rocky shores, and you can get lobster super cheap just about everywhere. Even little road side shacks had lobster.

Did I mention I love lobster? Well, I love all lobsters except for one.

We were eating at this nice restaurant that served 2-for-1 lobsters. I was tearing through my second lobster when the little fucker decided to fight back. One of the little sharp-ass spikes on his shell jabbed me in the thumb and then broke off under my skin. It hurt like a bitch. Over the next few days, my thumb kept swelling up, bigger and bigger, until it finally busted open, the broken-off tip coming out in a sea of grossness.

It was totally worth it though. He was delicious.

Speaking of Portland, Maine, if you ever go, you havta eat at a place called DUCKFAT. They have a duck confit panini that is amazing. Everything they fry there is fried in duck fat.

Horrible for the duck, but fabulous for the fries in their poutine. You have not lived until you’ve eaten a churro fried in duck fat. I still crave that damn churro and caramel sauce. As a matter of fact, we will eventually go back to Maine, and DUCKFAT might be on the top of the reasons why (said the FAT ASS!).

Our next major vacation was to Portland, Ore. I know, I know — from one coast to the other. This Portland kind of reminded me of Austin. Great, chill energy with amazing views everywhere. We went to the hotel on Mount Hood that served as the exterior shots for the Overlook Hotel in The Shining. Then, the next day, we drove to Astoria and visited the Goonies house. The coastal views are incredible.

In Portland, Ore., we ate at THE COUNTRY CAT. Oh my God! They had the most amazing grilled pork chop, served with crispy porchetta and a piece of deep-fried hogshead cheese served over grits. Crazy good! And the hogshead cheese, which sounds disgusting, was actually really good. Eating face never tasted so good.

They also make their own beef jerky. It was too sweet for my taste, but it was still pretty good.
We went to Destin, Fla., once and had a great time. They call it the Redneck Riviera. I’m not sure why; it was beautiful, and the people were friendly. We had a nice, romantic dinner at AJ’s Seafood. White sand beaches and heavy pours of Malibu Rum at the bar made for an amazingly relaxing week.

The only thing that freaked me out was parasailing. It was a lot of fun, but while we were in the air, we could see dark shapes in the water exactly where we had been swimming the day before. That’s when every sea creature and every monster you’ve ever heard of run through your head, and you hope that you make it safely back to the boat. Anxiety aside, we had a great time.

Before we went on our Maui vacation, I googled restaurants that have been on Diners Drive-Ins and Dives or any of the other shows I watch, and I could not find a single one that had been to Maui. There plenty that had been to the Big Island in Hawaii, but none, at that time, had been to Maui. It was going to ruin my streak of visiting places I’ve seen on TV, but oh well! I figured we would have to find great places on our own. No big deal.

Our first night there, we asked a local — a cute guy selling wooden sculptures on the beach — “Where do you like to eat?” He said STAR NOODLE, so we made sure that was the first place we tried. It was the best Asian food I’ve ever had. I had the garlic noodles, and Jamie had the pork ramen. All of the noodles are handmade on site, and it was amazing.

The cool thing was, about five weeks after we got home, Diners Drive-Ins and Dives actually did an episode where they went to that STAR NOODLE. So this time I was ahead of the game! I know it’s weird; maybe I am a little OCD, but that made me feel so good, like I finally remembered something that I forgot, or that I found a lost piece to a puzzle. Either way, I felt even more satisfied with our trip to Maui.

Two years ago, we went to Palm Springs for a week for the premiere of A Very Sordid Wedding. We decided to drive to L.A. and go sightseeing one of the days, and I insisted that we go to the BUN SHOP and try their steamed bao buns. The pork belly ones were so freaking good. Why THE BUN SHOP you say? Because I saw it on Triple D, and because it is co-owned by Steven Yeon, aka Glen from The Walking Dead. We didn’t see him, but we did meet his brother, and we had a fabulous lunch.

Finally, last year we went to Hopkins, Belize. We had an amazing time and got to eat at GECKOS RESTAURANT. I’m pretty sure I saw it on one of the Travel Channel shows or maybe just a clip on YouTube. Either way, they had the best jerk chicken I have ever had. Belize has a lot of amazing places to eat, and most of them only use a small house kitchen, which is crazy if you think about it.

Now I need to plan our next vacation. I guess I should watch TV for some inspiration on where to go.